This review is of the edited TV-14 version of the film. All thoughts below should be addressed as such as a review of the unedited version would likely be a lot more negative. 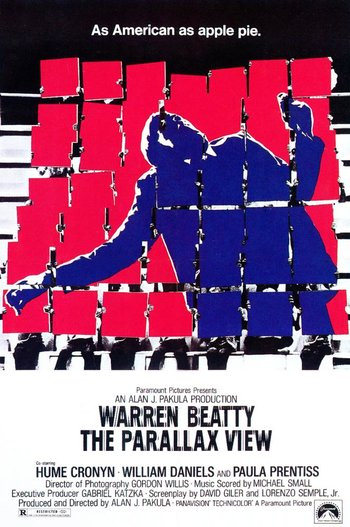 It’s time to look at an old conspiracy film that will keep you guessing as it goes on. You can’t trust anyone and have to keep your guard up at all times. Naturally the main character couldn’t quite handle these tasks and throw in the fact that this film feels quite lazy at times and you have a decently good premise with very poor execution. Conspiracy films are hard to do well when that’s the main genre, but they do make for good twist endings. Oh yeah, this review will have spoilers btw.

The film starts off with a political figure giving a big speech when he is murdered. The cops catch the first guy while the second gets away. Years pass by and everyone eventually believes that there only ever was 1 murderer. Even the main character Joe believes this until he is visited by an old friend who was also at the place where the guy was shot and she dies soon after. This means that everyone who was at the plaza is being systematically eliminated. Only a handful of people still exist..including Joe. Joe must get to the bottom of this conspiracy and to do it he will have to try and get enlisted.

Here’s one problem with Joe’s plan right off the bat and it’s never addressed by him or any of the characters in the film. He was in the picture. I’ll discuss the ramifications of that in a second after we look at Joe’s plan again. So, Joe murders one of the members and fakes his death. Both weren’t actually part of Joe’s plan, but they happened so lets roll with it. He decides to go undercover by submitting an application as a new person and acting like he’s a little off the chains. The organization seems to buy it and gives him his first mission. I’m not exactly sure what that mission was, but Joe basically ends up being the scape goat for another murder and is quickly gunned down. So ends his brief stint as a detective. Do you see what was wrong with his plan?

He was never going to fool them into thinking that he was some random nut who wanted to join. He was on their most wanted list for years and never even put on a wig or did anything to change his look. He went in under the impression that the organization didn’t even care about him so they wouldn’t be able to tell. That’s like a guy who always goes to the local pizza store going in one day and pretending to be someone else without putting on a disguise. It just won’t work and Joe’s plan was doomed to fail. His friend also didn’t give him a great fake ID apparently since the villains saw through that as well and Joe had to make a second one. It was a terrible plan, but Joe never was much of a thinker I guess. His friend came to him for help and he basically just laughed at her and sent the girl back to her doom.

Finally, Joe compromised his safety even more by sending cassettes to his old newspaper boss and revealing that he was still alive. Lets put it this way, the more people that know, the more likely it is that the secret will gt out right? Joe even impacted events by telling Bill not to make any charges or allegations against the organization. Instead Bill stayed quiet and the villains probably thought that this was extremely suspicious. Then they were also probably watching Joe at all times so I’m sure that they saw him send in the audio every week to the boss. His plan was just full of holes and that’s why he plunged into the abyss.

There is also a long brainwashing video that is just brutal to watch. They could only afford a handful of pictures so they just keep replaying them over and over. You’ll get the point of the video a few seconds into it or more likely as Joe is heading over to the seat. This film isn’t exactly subtle. So, then we don’t need to see the entire video that feels like 5-10 minutes long. The Thor picture was fun, but the rest was all just gritty stuff to remind us that the organization is serious business. I also find it laughable how they expect that to brainwash everyone. You can’t show 1 video and expect it to work so easily or even have any kind of effect on the person it is on. If the film had said something like *10 hours later* then that would be better since it would have meant that Joe had been there for a long time.

There are also a lot of really drawn out scenes like Joe walking through the airplane. Watching everyone do nothing much gets old pretty quick. Everyone moves very slowly so you get to stare at them all. We even head to a crooked town where the Sheriff and Deputy go around beating everyone up. Of course, as we find out later they were fired ages ago, but I guess nobody in the town ever knew that. The cover ups here are hard to believe as well. Unless everyone who speaks up is getting instantly murdered I don’t see how word isn’t getting out. What was the cover up for Joe’s death at the end? The dialogue at the end basically says that Joe was the only killer so did nobody take fingerprints of the gun to find others on it? I don’t think Joe actually picked up the gun either so that should be easy, but I suppose the fingerprint guy was in on it as well. Conspiracy films definitely don’t tend to follow logic all that much and it’s not a big thing, but you will certainly find it hard to buy into any of this. Even the cops at the beginning of the film are corrupt just to reinforce the idea that everyone is evil here.

The second half of the film just feels uneventful. Joe is just following orders and slowly getting into the villain group but it basically takes him the whole film to get his first mission and then he is instantly murdered. He didn’t actually learn anything nor did he make any progress in stopping them. As a result, the entire film also feels pointless as well. It’s an interesting approach to effectively show a futile attempt at stopping them rather than the epic actin hero who defies all odds and takes dozens down. Still, it’s not necessarily a good approach or at least not this time. Joe just wasn’t smart at all and why would you just stand around by a gun for about 10 minutes? He really wasn’t thinking. The writing in the film isn’t particularly good either. The heroes aren’t smart as I mentioned and the villains have no real personality either. I do like the Illuminati though. You rarely actually get to see them appear in these films.

Overall, I wouldn’t recommend checking out this film. You can find conspiracy theories anywhere so it’s not as if they’re rare, but I guess a whole film about one theory just couldn’t end up floating. The brainwashing video drags out much like the rest of this film. It loves going for zoomed out shots of people walking and running around. Joe couldn’t save anyone in the film and he couldn’t save the film itself. If you want to look at a real conspiracy, check out the whole Berenstein vs Berenstain Bears issue. That one has always peaked my interest and has a better climax/conclusion than this film since we are still living in the conclusion.