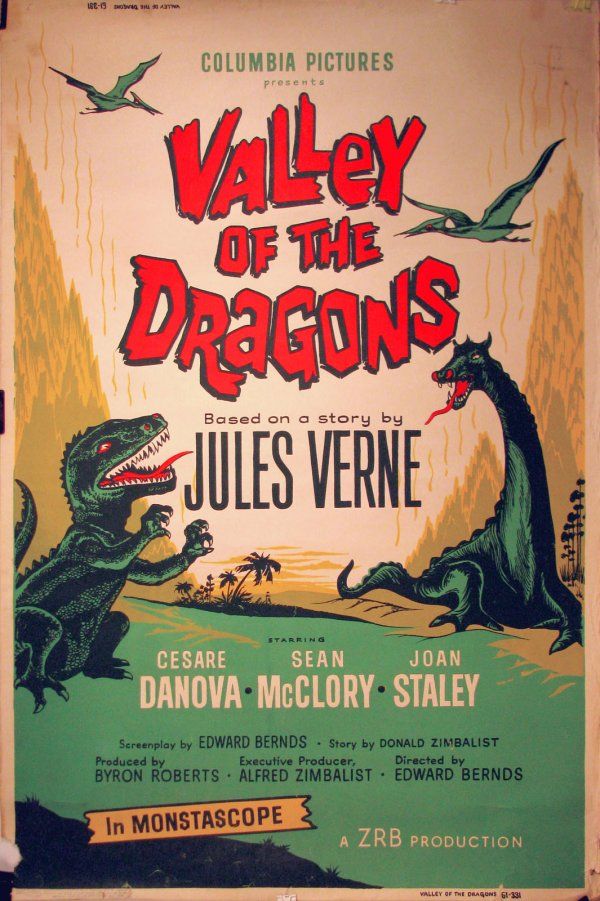 It’s time to look at an old film with a pretty misleading title. The beginning had a good premise but once the time travel occurred it quickly fell out the window. Now, I do like time travel but I prefer to go forward in time rather than backwards. If you ask me it’s just a lot more fun that way. There’s not much in the past that interests me, at least not when you get into the caveman era.

The film starts with two guys about to have a duel to the death. Apparently, they seem to like the same maiden and naturally one of them has to die for this. They ready their guns and move a few paces to take their shot but that’s when an earthquake occurs and scatters them to the winds. When they get back up they appear to be on a new planet. They’ve done their first dimension jump and are in the distant past where “dragons” currently roam. Now, you can make the case that it’s past Earth or another planet but it doesn’t really matter. There’s a scene where they notice that the stars don’t match so it’s probably a new world. They each end up going to different cave factions that have been warring with each other for eons. Can they help the two teams make peace or will they all die against the monsters?

As far as the dragons are concerned you shouldn’t get your hopes too high. Their appearances are few and far between. If we’re being honest the big one doesn’t appear til the end. Most of the little creatures running around are the kimono dragons which are basically just lizards. They aren’t exactly all that scary. The big one is fun enough but definitely pretty mindless and lets the heroes attack him over and over again until they eventually take him down. If he had done just about anything else then he could have won. The monster still did rack up a decent body count I suppose.

One weakness with the film is definitely the whole caveman element. I’ve never cared much for the trope of having the main guy try to teach English to these guys. For one thing, Hector isn’t all that understanding and gets frustrated pretty quick. Does he really expect them to learn English overnight? His voice can also be a bit annoying but that part’s not bad as it fits the character. He’s supposed to be annoying.

The other guy (Michael) is a lot more patient with the cave people and becomes the leader real quick. I suppose I would probably say that he is the better character of the two as he had more personality. He also became a leader real quick and did most of the hard work in the climax. I wouldn’t say either character was all that great, but he got the job done.

The writing was reasonably solid I suppose. The scenes with the ancient people weren’t that good but the banter with the two leads was pretty decent. It’s always god to have a dynamic where the two characters initially want to destroy each other but are then forced to work together. It is a bit clichéd I’ll admit but as this was back in the 60s it pulls this off unironically.

Then it almost goes without saying that the romance element is very weak here. The cave women basically throw themselves at the main two guys since they dominate the pack so easily but it’s all so fast and doesn’t feel real. We even get jealousy plots and also see why the two factions are warring from the start. Without the main two guys keeping them in line it is pretty clear that the two factions can’t control themselves and would be picking fights constantly. Having one “strong but not smart” character is enough for most films, make that the majority of the cast and then the movie has really got a big problem to deal with.

I can’t really say that the pacing was all that good either. While it almost goes without saying that a boring plot will drag on, this one really goes as slowly as possible. One scene in particular that really takes forever is when the heroes are trying to stab the giant monster. It’s the same action over and over again for at least 10-20 minutes with no variation. After a point it just comes across as having no real meaning and the scenes are complete filler. The action isn’t filler, but redoing it over and over certainly is. You could tell that the writers had run out of material by the end.

Overall, Valley of the Dragons is a film that was pretty decent for the most part but the actual plot holds it back quite a bit. It should have been a film about the leads getting trapped in some kind of vicious world for sure, but not one this far back in the past. If it was more modern we could have gotten around all of the scenes of them trying to teach the people everything and more banter instead. Of course by this point I am describing an entirely different film, but you get the gist of what I’m saying. If you don’t mind the past element then I think you’ll reasonably like this movie since it’s the main thing holding it back. Just don’t go in expecting a lot of actual dragons.