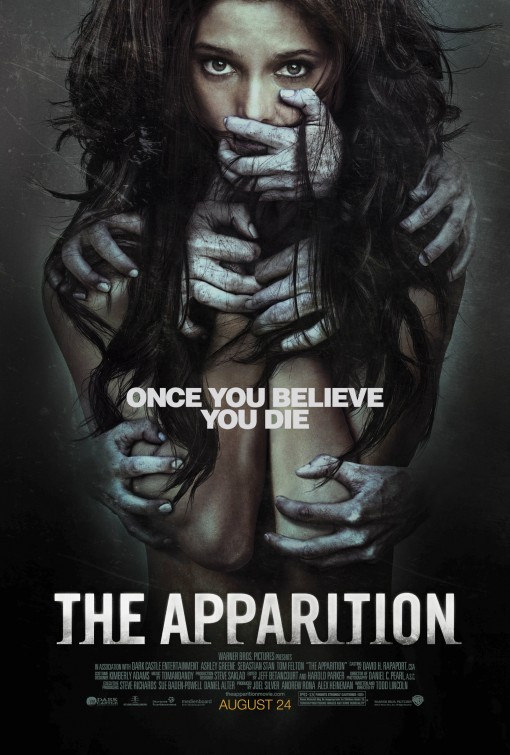 This film is the ultimate example of why you shouldn’t hang out with sketchy characters. The main heroine is put in the most unfair position possible as she is surrounded by people who know that an all powerful entity is coming to slay them all, but they all lie to her face about it. By the time she figures it out…it’s too late. The Apparition is just a film that’s not very fair and doesn’t mind letting you know this.

Kelly is living an ordinary life with Ben. They talk about the future and life is full of possibilities and fun. That starts to change when they find weird mold in the house and suspicious things start to happen. It almost seems as if something is in the house with them, but that can’t be right? Kelly knows how this works and a monster shouldn’t be after them if there’s no reason for it to be angry right? Well, Ben doesn’t know exactly how to tell her this, but he was with a very shifty cult a while back and they decided to awaken an evil spirit for kicks. The chant worked and the spirit murdered his old girlfriend. It has been hunting down all of the members one by one, but Ben doesn’t believe it’ll ever happen to him.

This is for 2 reasons. 1. Ben’s not very smart. 2. Ben doesn’t believe in spirits even though he saw one murder one of the group members in front of his eyes and has repressed all knowledge of the event since then. He has also conveniently ignored his email and phone messages til now. As the situation gets more and more our of hand, Ben decides to look at his email and sees over 20 warnings from the only other member still alive, Patrick. Patrick warns him that the monster is getting stronger and stronger so he should probably get out of there. Ben doesn’t let Kelly know of course, but luckily she is actually pretty smart and breaks into his Laptop to find out what’s going on.

Naturally, the two of them don’t get along much after this and I’m certainly on Kelly’s side with this. Once again, it’s just too late though. Just by association to Ben, the monster wants her now. It has reality warping, teleportation, super strength, telekinesis, and a bunch of other super abilities. Needless to say, the heroes do not stand a single chance. It also likes to mess with the heroes so it toys with them for the duration of the film. It likes to wait until the heroes are too weak to resist or have completely given up, then it moves in for the kill. If you don’t get weak and have a strong will then the monster loses patience and will just murder you so it’s as I said. You were doomed from the start.

Ben never does anything to make you find him even semi likable here. Even once it’s night out and he decides to camp with Kelly outside, he doesn’t take his job seriously. He falls asleep right away and when he wakes up, he leaves Kelly all by herself to investigate a noise he heard on the other side of the house. Shockingly, nothing attacked Kelly in the mean time, but it continues to show why Ben just isn’t very reliable or the kind of guy you want to have your back. You just don’t know how long he’ll have your back so it’s best to just fend for yourself.

Patrick was a reasonable character to an extent. He was a lot more likable than Ben, but that’s where the buck stops. It was his idea in the first place to wake up the spirit and then he wanted to do the experiment again. With modern technology, surely it wouldn’t fail again and make things worse right? Well, I’m afraid that it does and you’ll feel like rolling your eyes when they’re surprised about this. He built himself a little hut behind an electric fence and trapped himself in a cage so that the monster couldn’t get him. Yeah…that didn’t work too well. The heroes try to go in the cage too since if it didn’t work the first time, maybe it’d work next time right? It ended up failing again. That’s when Kelly had the amazing idea to head to her local Costco. After all, you can’t keep running on an empty stomach right? Unfortunately, she went to the tent section and that was her final, fatal mistake.

You can barely call it a mistake though I guess since her end was inevitable. The film plays out like a classic horror so that means there are a lot of negatives here. For starters, the next door neighbor has a dog. This is a bad sign and all experienced movie goers will likely realize this. The Dog always dies, so much so that there is a whole website devoted to warning you ahead of times which films have a dog death in them. This one is no exception as the Dog tries to fight the Apparition and is defeated. The film was doomed either way, but taking out a dog is the icing on the cake. There’s no going back from that. We even had some fake jump scares afterwards with a little girl warning them that she’s on the Spirit’s side and a lot of other iffy moments. While it may have been a nice gesture for Kelly to give the neighbors a new dog, I think it was misguided. If your Dog was murdered, would you suddenly want to get a new Dog the next day? Not only are you putting another Dog in danger, but it’s hard to just “move on” like that. It wasn’t handled very delicately.

I actually can’t recall the obligatory shower scene so I’ll give the film some credit for that, but take it lightly as I may have just forgotten about it. I could fact check that, but I’d rather not so if it is there, just feel free to deduct another star from this review or half a star. The film’s not overly violent at least as it prefers to just have a tense atmosphere and some spooooky visuals. The scene where a character is crumpled up like a piece of paper is done well and likewise with them being thrown around the room.

The Apparition’s signature attack is similar to Robin’s from One Piece. It will materialize hands around you as they choke you to death or just bring on the fear. She is even able to materialize from your clothes to bring you into the Underworld. Once you’re in its grip, it is exceptionally hard to break out. It’s a pretty strong monster and it can hold its own against the other big ones in Hollywood. That being said, they all tend to have the same powers and personality so it’s not as if this is surprising.

Overall, The Apparition plays it by the book. It doesn’t really do anything new or unique in the Horror genre and just uses the same old jump scares and creepy visuals. It falls into the animal violence trap and also has a very annoying main character in the form of Ben. Kelly wasn’t bad, but I would have gotten as far away from Ben as possible. It’s too bad since they got along well, but being put in the death list for a supernatural entity is a pretty inconsiderate thing for Ben to do to her. There’s nothing really good to say about the film at all and the heroes make the wrong moves so often that you’ll be shaking your head. It seems like there is always an excuse not to leave the house and considering that Ben was making most of the excuses, it just makes you more and more irritated the whole time. If you just like watching horror films in general, then you should enjoy this one. It has all of your usual cliches and such, but if you want a film with more heart, check out Poltergeist 3. It doesn’t play by the usual rules and that’s what made it so good.