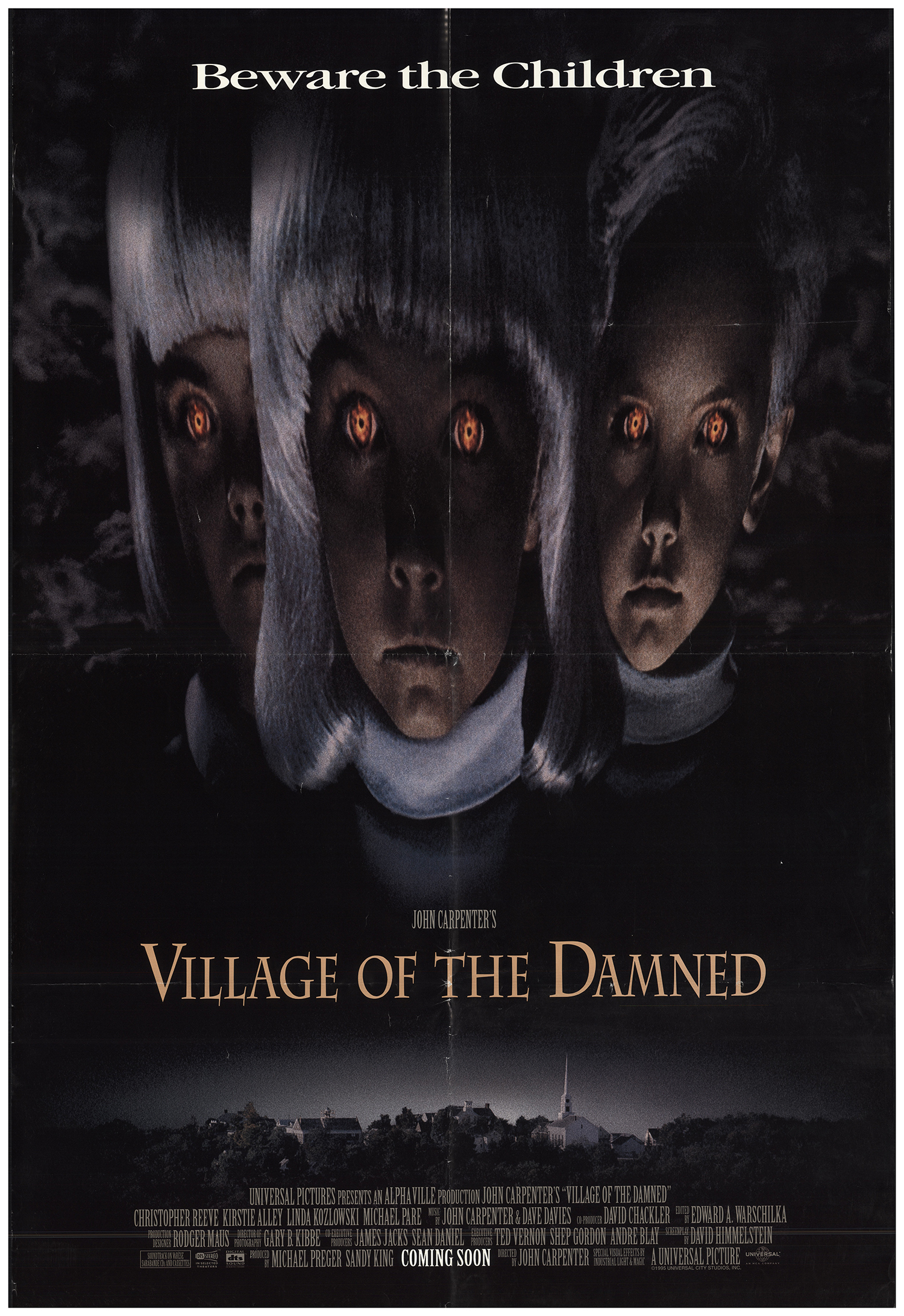 It’s time to look at the gritty remake of the original film. This one decides to switch out the tense atmosphere for just murdering everybody and misses the entire point of the concept. It’s not as if it’s a great concept from the start, but the original movie had 1000x the quality of this remake. The 1995 film just isn’t very good and I had to give it a full thumbs down in this go-around. Better luck next time I suppose…also I would switch the title as well.

The movie starts off by introducing us to a nice little town. Unfortunately one day everyone abruptly falls asleep and it’s like the whole town was shut down. The government is called in and agent Verner shows up. It turns out that everyone in the village is now about to have a baby so she offers them all a ton of money to keep the babies. These babies have super powers which mainly involve telepathy but also a shared memory so they learn at the same time. They quickly begin bumping everyone off in the village so the government is forced to consider drastic options. Is there any good in these monster children or are they all corrupt from the start?

The main guy here is Alan and his kid is really the leader of the pack. He wants to see the good in the kids, but after they murder his wife he finds himself having a hard time coping. Verner wants him in the thick of things though because he is the only one who can really handle the truth about these babies. It puts him in a pretty tricky spot. He seems to have the most optimism that there could be some good in them despite what happened early on in the movie. He’s a reasonable character and at least he put up some mental defenses. I would have liked him to be more pro-active rather than giving up after his wife was bumped off though. It’s hard to take revenge against kids, but maybe moving out of town or trying to arrest them. Almost anything’s better than just giving up.

Meanwhile the other parents all have their little plots as well. Some go drunk and crazy because they aren’t used to kids being so powerful. Others try to still be normal parents, but this becomes impossible. Ultimately the kids are all evil and want to end humankind anyway so it’s not like it really matters what the people do. They all have to be extra careful though because if they make any kind of mistake or look at the kids in a mean way it’s curtains. The penalty for any kind of action against them is automatically death which is pretty intense. They also make sure to destroy the humans as painfully as possible and punish them multiple times.

This version of the movie is just very dark in this respect. The kids take over the village rather quickly. They’re impossible to defeat at least with how long the people take to act. One such scene is when the government is called in and they all stop to tell the kids to put their hands in the air. What’s the point of doing this when they can just break your mind and make you shoot everyone else? If you’re coming in to eliminate the kids then you shoot right away. If that wasn’t the game plan then you shouldn’t have shown up at all. Coming in half ready just means there will be more victims. It is an excuse to have a long fight between the cops and the army which ultimately doesn’t accomplish much of anything.

The saddest death is probably for Verner. You had a feeling that the kids would get to her eventually but there was a point where you thought she had a chance. After she warned Alan to get out she should have made a beeline for anywhere outside the town. Not leaving immediately is ultimately what cost her. The luckiest characters would definitely be the ones who get hit by the bomb since it’s at least an instant death instead of it being drawn out.

Only one of the kids does not appear to be totally evil and even he waits until the very end of the movie to do anything. I would have liked to have seen him stand up to the other kids a little sooner. Alan does buy him enough time to make a stand so it’s better than nothing. At least Jill and David get a happy ending which is one more happy ending than anyone got in the Omen. This is still a terrible film though. I think part of the issue here is that a lot of violence is committed towards non-combatants.

Over the top violence is bad in any context. I would argue though that there is still a world of difference between someone like the Terminator and a bunch of army fighters getting destroyed than a local school teacher who has nothing to do with anything. A lot of the people who end up dying in this film really had no malicious intentions and just made a mistake along the way. For them to meet such a gruesome end really doesn’t do anything to service the plot and just feels gratuitous. It’s really poor writing that is just an excuse to feature more deaths. This film really relies on shock value at the expense of every other part of the movie.

Overall, I’d recommend staying away from this movie. We’ve got another big 0 here and you can probably see the trend. Films about evil kids are usually just pretty terrible and especially when you make them as gruesome as this film. The murders are really bad here and some of them are even worse than what you’d expect to see in something like Scream. I highly recommend watching the original instead if you want to see this plot, but honestly you could also just skip it entirely. There’s really nothing here that you absolutely need to see and I wouldn’t exactly call it an enjoyable experience either way. What you want is a real film with action scenes like Man of Steel or something.