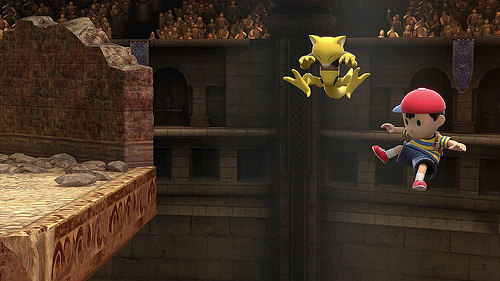 Suggested by Sonic Ness is a tough kid with several PK powers at his disposal. It would likely be tough for Alakazam to manipulate him due to Ness’ own psychic abilities. That being said, Alakazam still has the edge here with his large array of moves. He can use dozens of different Pokemon moves and I’d also argue that he is faster than Ness. That will let him throw out enough moves to keep Ness off balanced and eventually the hits will start to add up. Then that’ll be the end of the fight. Alakazam wins.

Alakazam is back and this time he’s up against Mewtwo! Mewtwo’s got the hand to hand advantage in this round, plus the speed factor. Alakazam is a pretty powerful psychic type in his own right, but in the end it won’t be enough to stop a pokemon as powerful as Mewtwo! Mewtwo wins.

Alakazam is pretty powerful and can take many opponents down! Still, in the end he can’take down Ash. Ash is just too powerful and will continue to shine! Defeating him is like defeating the ocean! Ash is getting closer and closer to 200 matches. Perhaps he will reach that goal one day. Ash wins.