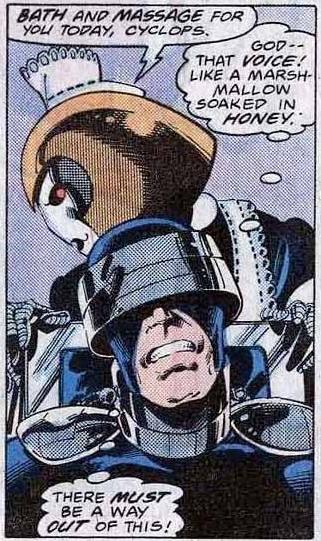 They always say that you don’t want to mess with a Nanny and now we know why. She is definitely hard to stop once she has the upper hand. Still, Cyclops has had a lot of success with his optic blasts in the past and I think they’ll serve him well here as well. The Nanny won’t know what hit her and Cyclops will be able to claim the advantage. He’s been the leader of the X-Men for a long time and he’s gotten a lot of experience during this gig. Nanny won’t be able to stop him. Cyclops wins.

Originally, I never thought of The Flash as a very powerful character. I liked his super speed, but just felt that it was not enough. It would be several years until I finally accepted him as a heavyweight contender. His speed is immensely impressive to the point that he makes Cyclops (Phoenix Mode) look slow. Cyclops has the massive edge in firepower, but the Flash is no slouch with his speed infused punches and Blue Lantern abilities. Fights like this one can be quite tough as it is a battle of extreme speed vs power. That being said, the flight is really what wins Flash the match. Flash (Barry) wins.

The Locust is a villain that you shouldn’t underestimate. Cyclops did and paid for it with a casual back fist. The Locust is not the kind of villain who will listen to the ramblings of a superhero! Still, Cyclops did have the Phoenix Force which means that Locust doesn’t stand a chance here. A quick fireball will end up taking the villain down in an instant. Locust has no way of defending himself from such an attack. Cyclops wins.

The Unicorn used to be on the same level as Cyclops, but things have changed since then. While the Unicorn is a powerful villain, Cyclops once gained the powers of Phoenix. With these abilities, the Unicorn wouldn’t even be able to damage Cyclops. The mutant is simply too powerful at this point and a single blast could end the entire planet! That’s game over for the Unicorn. Cyclops wins.

Sonic is an incredibly fast fighter and that’s why Cyclops isn’t going to win this round. Sonic can run so fast that he could go back in time and grab his past self, together they would speedblitz Cyclops…if that were allowed. Either way, Sonic takes this round and uses the power of the Chaos Emeralds to surpass the Phoenix Force. Sonic wins.

The Laserdisc Guardian is back and now he’s up against Cyclops. The Guardian has some powerful sonic vibrations, but Cyclops has the Phoenix Force and a lifetime of battle experience. His optic blasts should be able to get through Laserdisc Guardian’s defenses pretty quickly. Cyclops wins.

A long time ago, Red Hulk would have won this battle with ease. Cyclops wasn’t a really high tier character, but that all changed when he absorbed the Phoenix Force. Now he has powers that are on a whole other level and he can stand up to Red Hulk. Red Hulk is definitely powerful, but I think Cyclop’s speed may give him this round. Cyclops wins.

Kagura (Gintama) makes her debut on the blog, but she won’t be able to defeat Cyclops. At her current state she lacks the skills needed to defeat him. Cyclops has his legendary optic blasts and also controlled the Phoenix Force. He’s definitely a dangerous marvel hero to face! Cyclops wins.

The Silver Surfer has the power cosmic and he’s one of the stronger marvel heroes out there. For a long time he may have had this match, but Cyclops has grown too powerful for him. He once controlled the phoenix force and commanded nearly limitless power. The Silver Surfer takes a loss in this round. Cyclops wins.