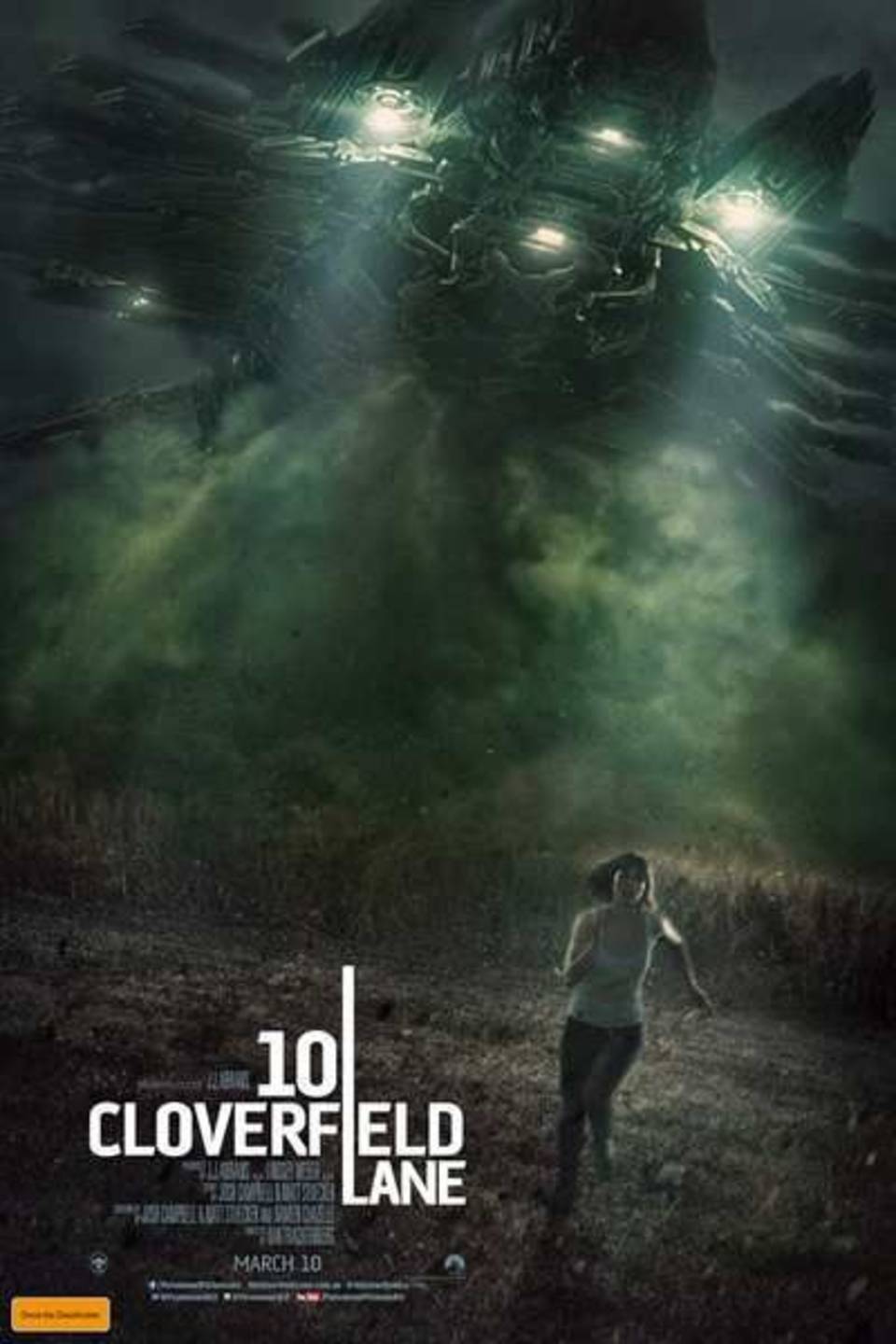 The original Cloverfield was an intense monster film. The hand held camera filming technique was a bit jarring and the party scene ultimately crippled the film, but at the very least you couldn’t say that the film didn’t try hard. This sequel completely throws all of that out the window though. The monster barely appears and for the most part this film has nothing to do with anything. Definitely not a title I would recommend.

The film starts off with Michelle driving away from home. She has decided to leave her family for good after having a disagreement with her boyfriend. Unfortunately, she takes her eyes off the road and someone slams her off the track. When she wakes, Michelle finds herself the captive of a crazy man who believes in a bunch of conspiracy theories. This villain is very possessive so she is going to need to find a way out and fast. The problem is that the only other inmate here broke his arm and also believes that Howard is just here to help them. Becca will need to convince him otherwise.

The film breaks quite a few cinematic rules right from the start. First off, the film opens with the lead crying and we get a lot of dramatic scenes where her sadness goes on. This isn’t good because the film has only just started so we haven’t been given a reason to care about her yet. Moreover, Becca’s family plot never becomes relevant so this makes the scene even more out of place. She could have just been driving out to the market or something and it wouldn’t have changed the plot. Giving her some drama like this without any kind of purpose in the story doesn’t really help it. Naturally, it’s hard to be too harsh on how she takes the whole situation at first since being a captive is pretty scary, but it’s also more crying and such. I think the film tried too hard to make her just an “ordinary” person to the point where she is too passive.

That’s hardly what really holds the film back though. The whole plot is about Becca being kidnapped by Howard and the whole film is them being stuck in this house. It drags on considerably and of course she has to defer to the villain for the majority of it in the interest of self preservation. A good and realistic move on her part but still one that isn’t any fun to watch. Howard just keeps getting the last laugh for most of the film. Then the movie doubles down by making the film way darker for no reason as we learn about another victim from the past. There’s enough implications here where it destroys whatever was left of the film. If you’ve got an iffy plot and decide to go for being dark, there’s not much else the film can do to save it.

Once we finally leave the house we do get an alien monster fight scene. It’s definitely an “about time” kind of moment for sure. That being said, the monster has been considerably weakened. The film is operating on a tiny budget so they try not to show the monster much but from what I can see it didn’t look like Clover. I’m thinking it’s a different monster or maybe these aliens arrived to try and fight Clover while destroying the humans. I’m sure there’s some mind of reason but it’s not like the film would explain that. It makes for an exciting climax but even this part gets fumbled as Becca is able to take down a huge Kaiju with a single bottle of wine. Are you kidding me? If the monster is this weak then we’ve got problems. She hit it through the weak point but monsters can’t resist the urge to roar so it would be easy for others to replicate the feat.

The character roster is pretty small so it’s easy to talk about the main three characters. First off we have Becca of course. She’s not a terrible character, but I admit that she is one of the weaker leads that I have seen as of yet. Again, I’ll refer back to where I wrote about her earlier. The film makes her too nervous and just not pro-active enough. She makes too many “General Audience” type decisions which come back to bite her. She had a few opportunities to really take Howard down for the count but always opted to flee. Granted, Howard had quite a bit of plot armor to help him.

There’s one scene that involves a pot of acid and somehow he manages to tank it. I didn’t believe that for a second, it’s a bit much considering that guy is just human. It’s not like he’s a super bodybuilder or anything like that either. Naturally there is nothing to like about Howard. He’s just another crazy villain out to destroy the world. Then you have the other guy named Emmett who is extremely naive and just plain annoying the whole time. He’s slow to believe anything and conveniently he had his arm broken so he can’t help Becca fight back. When you factor all of that in he just isn’t all that helpful and half of the time is just annoying. It’s that gray area where some of this isn’t the character’s fault but it’s hard not to blame him at the same time.

Overall, 10 Cloverfield Lane is definitely not a film that I would recommend. It really does its best to completely ignore the original Cloverfield movie and that’s not a good thing. The film could and should have just called this movie something else and it would have been a lot better. You just can’t make a sequel and not have the monster be one of the main characters. It’s just not going to work. The scenes at the end don’t save it, especially given that the monster looks so bad the whole time. If the monster had won or something then it would have been fine, but since it ended up losing it defeats the whole purpose. The film seemed to hint that the radiation is turning people into zombies or something so having a zombies and aliens vs humans plot would have been infinitely more interesting. We don’t even get to see how the army reacts. Avoid this film at all costs and you’ll be fine. It’ll ruin your memories of the first film…even if I wasn’t a big fan of that one either.