No stats this time. 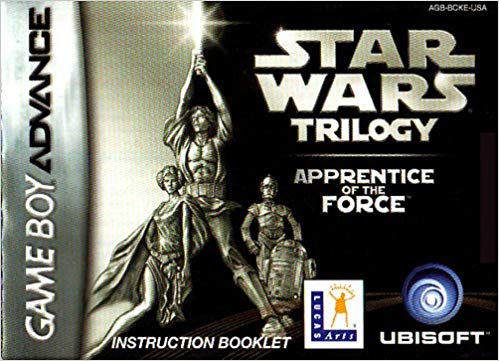 It’s time to look at another retro Star Wars game. This one is also for the Game Boy Advance, but do not be alarmed. It is significantly better than the last one and feels like a true Star Wars title. This brings us back to the level of quality that you would expect from such an esteemed franchise. This one can proudly call itself a Star Wars game and nobody would bat an eye. It’s got good gameplay and while the game is admittedly pretty short, it’s at least no a chore to get through. No password save system this time.

The plot follows the original 3 movies. You play as Luke Skywalker in all of the levels as you recount the events. While most of the levels take place on the ground you do get a pair of space levels. These may have been thrown together a little quicker than the ground ones, but they’re pretty reasonable. The constant checkpoints make up for the gameplay not being too refined here. As a result it flows together pretty well and makes for a wholesome experience. The real meat of the game is the ground combat though and I liked it. It’ll remind you of the old school beat em ups like Streets of Rage or the Ninja Turtle games.

For the first half of the levels you fight enemies with your blaster. As the game progresses you eventually switch to a Lightsaber and slash away at everyone. Both styles of combat have their positives of course, but the lightsaber does pack more of a wallop, but you have to get up close which makes it a little more risky. The levels typically end as you make it to the end like a traditional platformer but sometimes you have to find a card key to make it past a door. The levels are fairly short but you will be stopped at times to take down all of the enemies. In that sense this one is definitely part beat em up.

It’s not particularly tough and when you die there is always a checkpoint so you will at most lose like 2 minutes of gameplay. The quickest way to deal with the enemies in my experience is to jump at them and use aerial attacks. They seem to do more damage than the ones on the ground and you can take out quite a few enemies this way. You also have a lot of options on how to take them down so really there is no reason why you would be stuck here. The only one I can think of is if you encounter a glitch. I encountered one glitch where I made it to an area that I wasn’t supposed to. As a result there were enemies under me but I couldn’t get to them to get out of the area. I eventually had to let them just shoot me so I could re-spawn and let them finish the job. At the end of the day that’s a pretty minor glitch though, could have been a lot worse.

There are actual boss fights here which was definitely nice. The battle against Darth Vader is definitely the highlight. He does a lot of blocking so don’t expect to just walk all over the guy. He’s a Sith Lord for a reason after all. As with the minions I found that the best thing to do here was to throw in aerial attacks. Mix them in with ground moves and eventually you will hit him. I’d also say to throw in some force push moves. They never hurt him, but while he is blocking those he is wide open to a strike. Just throw in all the mix-ups and you’ll be out of that boss fight in no time.

The graphics have definitely aged pretty well if you ask me. It’s the classic sprite look so the character models are on point and all of the effects look nice. It’s always surreal to see these games since it looks like something you could probably make into a sprite video. Once you’ve done that then you’re really set. The soundtrack is pretty forgettable, but we do get another retro remix of the movie intros which was nice to see. By the time this marathon is over I definitely won’t be forgetting the jingle for the opening credits.

There isn’t much, if any replay value here though. After you’ve beaten the levels there really isn’t anything to collect. The main story will only take you around 3 hours so you’ll be out of content in no time. You can get the game for cheap though so I wouldn’t say this is much of an issue. Better to have 3 hours of quality than 10 of a dragged out story right? It’s just the kind of game where you know beforehand that it’s going to be a one time experience.

Overall, I’d definitely recommend this game. It’s got that nice Star Wars feel to it and the gameplay is solid. I always did like these retro beat em up games. The only time they can be annoying is when there are no save points and you have to start the whole thing from scratch, but otherwise it works pretty well I’d say. There is now only one more game left on my Star Wars marathon, but that game will have to wait as I work on Mario + Rabbids Kingdom Battle. I don’t have much experience in the XCom Gameplay, but I definitely like it on principal. It reminds me of the Fire Emblem style and I always like adding a little strategy into the gameplay. It just spices things up quite a bit. You can expect that review to be coming up soon.