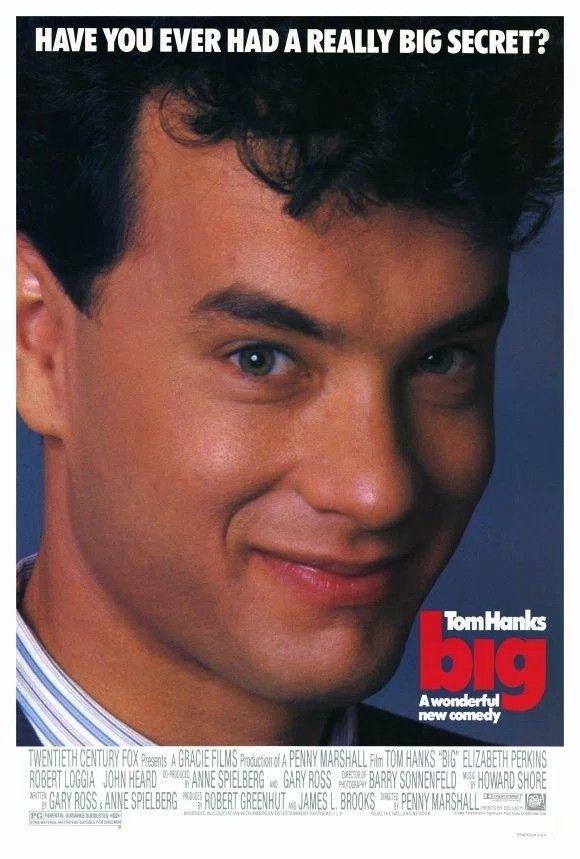 It’s time to look at a classic comedy film involving a form of body switching. In this case it isn’t a body switch like Freaky Friday, but more of a body upgrade as the kid turns into an adult. This kind of plot is always pretty interesting, but at the same time it can head into iffy territory very easily. This one does go there I’m afraid and ultimately doesn’t quite handle itself as well as Your Name did.

Josh has been having a tough time of it lately. He wants to impress someone at school but not only is she way older than him but she already has a boy friend. Josh runs off into the dark side of the park to try and forget this. There he sees a wish machine and wishes that he could be bigger so he could ride a roller coaster. As you can probably guess from previous wish type plots, the machine takes him very literally and decides to increase his size all the way to that of an adult’s. Josh tries to explain this to his Mom, but she’s not buying it. Somehow he has to find the machine again to reverse the wish, but he’ll need to find out where the circus is playing next. His friend Billy is ready and willing to help, but it’ll take a few weeks so in the meantime Josh needs to learn how to hold a job and live out this new life.

I think that’s where all the potential in these kinds of films is. Seeing how the kid in an adult’s body will handle the rigors of adult life. Honestly, most adult stuff a kid could totally handle. It’s just the taxes and finances that would probably start tripping him up. Josh is definitely lucky that this is a pretty old film as it was a lot easier to just walk into a shop and get a job back in the day. Being in charge of the toy section was also incredibly lucky for him. The film has a lot of nice scenes of Josh just enjoying this new situation. He can now buy whatever he wants and there’s little reason to go back to being a kid. Of course, he ultimately knows that he does need to return as it’ll be rough on his Mom if he doesn’t but Josh isn’t in as much of a hurry as he once was.

Where the film really drops the ball is the romance with Susan. Again, keep in mind that Josh is just a kid here. Even if he is in an adult body, it doesn’t make the romance any less iffy. He should have made sure things didn’t escalate since it’s hardly fair to Susan, but he decides to just enjoy the moment. The romance goes a lot further than you’d expect given the circumstances and it’s just hard for the film to recover from that. It’s a plot point that should not have happened at all. At the very least if the movie was going to go that route then Josh should have been aged up by a few years to make it less iffy.

Susan also doesn’t seem like a good character anyway. It seems like she has a lot of quick flings so she’s not very loyal. She takes the plot twists pretty well by the end, maybe better than she should. Then we have Paul who was the first rebound guy. He makes for a good antagonist, but of course he is naturally not here to be particularly reasonable. The scene of him trying to fight Josh in hand ball was pretty intense. I’m glad Josh didn’t let him cheat, but he certainly lost the fist fight there. Paul knows how to throw a good punch.

Meanwhile, Billy is a good friend to Josh. He does a lot of the research and puts a bunch of effort into getting Josh back into his original body. You can’t deny his work ethic, but I think he could have been a little more patient with Josh. Josh was ready to turn back to a kid after he finished some phone calls, why couldn’t Billy just wait a few minutes? Instead he pulls the whole “It’s either me or your job” card which isn’t particularly fair to Josh. Still, for the most part he is quite solid.

While the writing is decent for the most part, Josh could have been written a lot better. He’s extremely oblivious which is one of the reasons why the kids don’t usually rank. He doesn’t realize that he is acting like a kid half the time which is a bit iffy. Playing with his food at the ice cream store will probably make you cringe as well. He goes from being a kid to a grown up pretty quick mentally to the point where he’s probably gonna be pretty messed up once he becomes a kid again. Also, he could have done a better job of explaining things to the Mom. He should have gone with Billy and they could have proven themselves somehow or another.

I’d say that the best scenes here are when the characters first head to New York. I think the film did an accurate job of showing just how violent the city used to be. Gun shots were frequent and everyone was only concerned with staying safe. The New York pizza looks as delicious as ever and you’ll probably get hungry just looking at it. Getting any sleep the first few nights in such a rough neighborhood would probably be one of the hardest parts about suddenly growing up. I wouldn’t have minded just seeing more of the neighborhood and such.

Overall, Big is a fun film, but I can’t really call it a good one. Get rid of the romance and it’s a whole other ball game. After all, the film’s first half is where it is strongest. Once the film starts tying itself down with romance and drama it has less time to be a comedy. It’s unable to fulfill both roles. If you like the premise then I’d recommend checking this film out. Otherwise, Your Name is a better body switching film that avoids the issues that this one has. I definitely expect that Shazam will be able to pull off this concept more effectively.

Big the Cat is known as a power hitter, but he won’t be able to compete with the Hulk. The Hulk is vastly stronger and he has performed very incredible feats in the past. I don’t think that Big has enough speed to dodge for long either and his defense isn’t good enough. Hulk wins this round in all areas. Hulk wins.

Choji is pretty tough and with his skills he could pwn Big. Big is also pretty tough and skilled, but in the end his strength isn’t even close to Choji’s. Choji’s strength increased 100 times when he ate the red pill. Big The Cat can fish, but lacks the hand to hand skills that Choji has. Choji wins.

I’m afraid Big doesn’t have what it takes to win this match. He’s just not strong enough to defeat Allen. Allen may have a big sword, and it will let him win, but Big will try to get a hit in. Big has a fishing hook, but it won’t work.