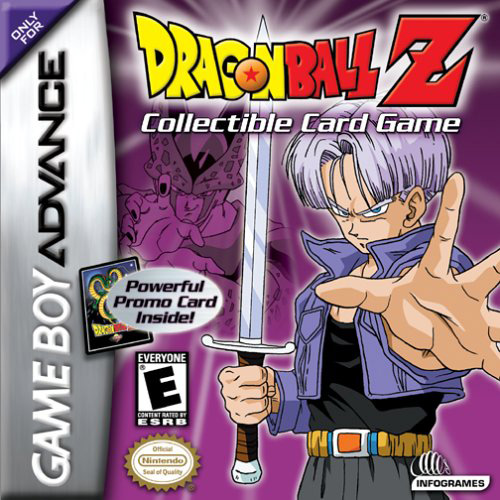 It’s time to look at a DBZ game that I’ve had for a very long time. Part of why I kept it in the backlog is because the game just wasn’t very interesting. I would play it a bit from time to time but the controls were confusing and since there wasn’t even really a story I didn’t see the need to keep on playing. Well, I gave this one another whirl and the game is as confusing as ever. It’s hard to ever make any headway here.

The game is based on the actual card game. Unfortunately it is hard for that to translate well to video game format. Unlike Yugioh or Duel Masters this game feels very clunky with matches that go on forever. Literally almost all of my matched went to time, which is the full 7 turns that a duel can take. Matches should not be going to the equivalent of sudden death every round. That tells me that there is something at least a little weird with the game. Since I don’t get it then the A.I. should at least be able to beat me up pretty quick.

Here’s the gameplay in the simplest way I can describe it. When you start the game you draw 5 cards. If you go first then you get to play any non combat cards you have. After that you choose to attack or pass. If you pass then you discard all but one card and draw a fresh 5. Once the opponent has done so as well then they will attack and you will pick a card to defend with. You have to try and take down all of the Life cards that the opponent has and they will do the same to you. You can win in one of 3 different ways. You can take all of their life cards away which will be a complete victory. You can also win via technical win by exhausting the opponent of all cards or maybe you can even grab the Dragon Balls and win via super victory. A final way you can win is also by raising your power level and anger level to the max setting. If you do any of these things then you will have claimed victory.

The problem is that the opponent will never let you do this. They block all of your hits and always seem to have more cards than you do. They don’t run out despite playing so many and every time you raise your anger level they reset it back to 1 using a spell card. As a result you just can’t claim the advantage and the rounds take forever. I was somehow able to beat Krillin and the second guy, but Guldo is where I met my match. After dozens of fights I still couldn’t conquer him and that’s where my DBZ card adventures concluded. It was time to throw in the towel. After all the only way to improve your deck is to keep on re-fighting the first two opponents, but I was only able to beat them once after a ton of tries. Doing so again just to hopefully get a useful card to make a comeback feels like such a long shot that it is barely worth it.

Then you’ve also got the fact that the game has no real effort put into it. There is only one piece of music in the entire game which keeps on looping over and over for every action that you take. You can only hear the same song so many times before you just have to take a break for it. How is it possible that the game wasn’t able to get more than one tune? It’s just crazy to only have 1 in the entire soundtrack if you ask me. There’s not much to say about the graphics either since there barely are any. You’ve just got the one illustration for each character as the squares match up with each other over and over again. The cards don’t look all that flashy either.

This game feels like a total cash-in and that’s not too surprising considering how long the loading times are. Each match takes forever in part because you can’t go through the turns quickly enough. You can spam the A button to at least get rid of the drawing phase and it speeds up the attacks but it also skips card effects so then the catch is that you’ll lose further track of what’s going on. It’s a pretty unfortunate situation all around. The length of the game is quite long as a result although it feels artificial. In theory you can probably get a good 20 hours out of this one and maybe more depending on how often you lose. There won’t be any real replay value, but at this point you wouldn’t need any since the campaign is so long.

Overall, Dragon Ball Z Collectible Card Game is the weakest of the DBZ games. It’s hard to picture any game losing to this one although since the DS also had a title based on the Card Game it is possible. What the title really needs is a better explanation of the rules and to speed up the gameplay a bit. I know the computer was able to use his avatar card at some points when the tutorial never even referenced how to do so. I tried using mine a bunch but every time I tried the game said that it wasn’t the right situation to do so. That’s not entirely helpful to be honest but it may not have mattered much. My deck simply wasn’t strong enough to beat my opponent’s so no matter how many times I would draw some cards it just wasn’t going to make up the difference. The only way you should get this game is if you are a really big fan of the official card game.