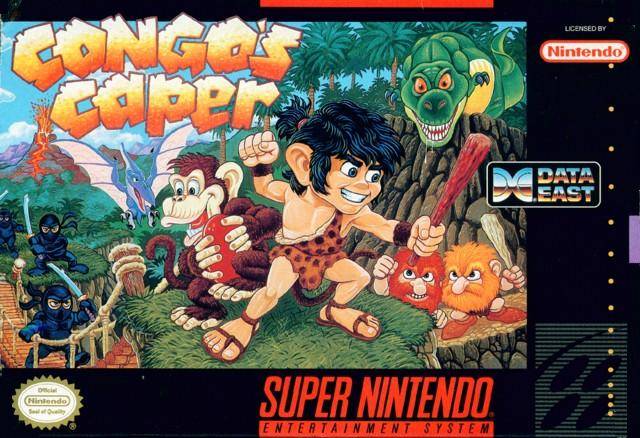 Congo’s Caper is a fairly traditional platforming title. You get to travel through different lands as you jump and fight your way to the goal. You can swing at enemies with your club and duck under obstacles. It’s a fairly short title but a fun one all the same. If you like platformers then you’ll definitely enjoy this and you can’t go wrong since the game is free after all.

The main character was enjoying a nice peaceful day when the heroine gets kidnapped by the main villain. He now has to save her before all hope is lost. The characters are now monkeys but with an item he can turn into a human. It’s an interesting gimmick. Instead of shrinking like Mario when you’re hit, the player turns into a monkey. I can tell you that the gameplay is a lot smoother when you’re a human so I advise you not to get hit. Sure, that’s easier said than done but I recommend that all the same. It’s just way easier to land blows and fly through the stage when you’re a lot bigger.

Each level is fairly different so the game deserves a lot of credit for keeping things fresh. You never feel like the levels are recycled or anything like that. The stages are also at a good length where they don’t drag on or feel too short. It’s actually a rather well polished game considering that you’ve probably never heard of it before. The gameplay is smooth as well and some of the bosses can actually be rather difficult. You’re probably going to have to break out the rewind and access point features a whole lot here.

Now the story is rather basic and by the numbers so you’re definitely here for the gameplay. The heroine getting captured is extremely standard but at least the game has her getting captured more than once which is a little different. Clearly the heroes need some kind of security detail at the ready since the villains can just waltz in and do whatever they want otherwise.

The bosses have cool designs and the boss battles themselves are rather creative. For one boss you have to avoid all of his legs and wings as you try to hit the head in the center. This boss is particularly difficult because he can move so fast and making any kind of contact with him will damage your health. You really need an air tight reaction time and a good plan in order to take him out. Otherwise you’re just doomed.

Throughout the game there were several moments that seemed incredibly difficult. You had to run ahead of some spikes or the ground collapsing. I died so many times to that and had to keep rewinding until I cheesed it. It wasn’t until the final level that I realized what was going wrong..there actually is a run button. It explains why the character was moving so slowly. I was actually walking for the majority of the game. In my defense the game didn’t make that particularly clear. It was fun to finally have this at the ready though.

The graphics look pretty good. I’d say that the style they used is one that ages really well. The colorful animations and character models are still rather sharp and the same is true for the environments. It’s closer to the high end on the side. The soundtrack is more on the forgettable side. Some decent tunes and all but nothing that will keep you up at night. It could have used some more high energy tracks which would have taken this to the next level.

Overall, Caveman’s Congo is a solid game. I won’t overhype it and say that it’s great or anything but you’ll have a good time with it. The game lasts for about an hour so if you need something quick to play then you should just jump on this one. You’ll be glad you did and I think it could do really well with a modern remake someday. Caveman type stories aren’t really my thing but for a platformer the gameplay is the most important part and I think this game proved that it could make this work.