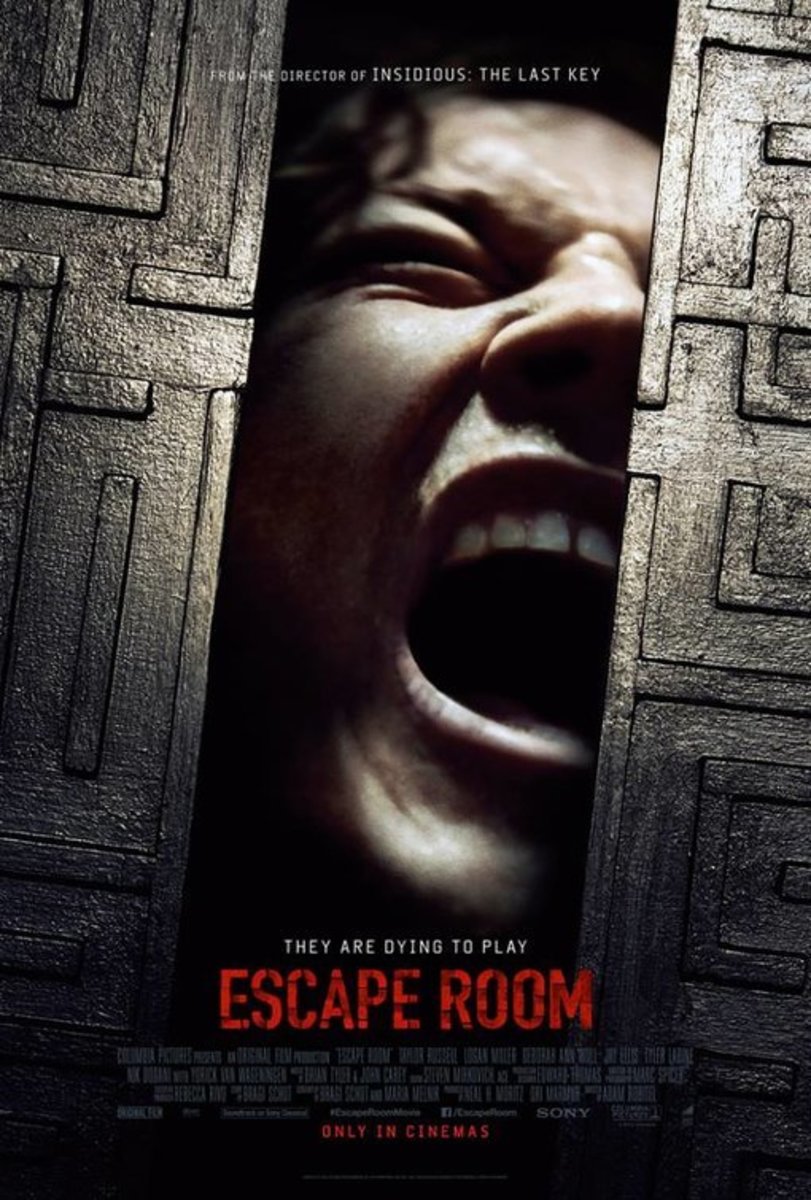 There are probably less than 10 horror films I’ve ever seen that got a positive score not counting creature features of course. This would be one of the few to make it as it was quite a bit better than I expected. The cast is actually pretty solid which is extremely rare for a modern horror title and the premise is utilized well. You can see the appeal of escape rooms after watching this although I’ve still never tried one.

The movie starts by introducing us to the 6 people who are going to get trapped. First there is the genius Joey who isn’t very good at hanging out with other people. She prefers to keep to herself. Well, one day her professor sends her a cube so that she can try out an escape room to pass the time by. She is supposed to try something challenging over the break as part of her homework so this makes sense. Next up is Jason who is a wealthy investor who probably isn’t using Robinhood so he won’t be frozen out of his sales. He doesn’t really need the $10,000 prize but is doing this for fun and since one of his best investors recommended he try it…the guy can’t say no.

There’s Ben who is at a pretty tough time in his life so he is eager to get some money. It’s all pretty simple to him, win the challenge and get $10,000. It’s similar for Mike who is a truck driver with a big family so he admits the money would be pretty helpful. There’s Danny who just loves escape rooms in general so he is eager to see if this one lives up to the hype. Finally there is Amanda who is the most mysterious of the bunch. We don’t know exactly why she is here beyond the fact that she got invited like the rest.

As you would expect, the 6 characters get stuck inside the room. They must now try to solve each puzzle before the various death traps wipe them out. If they don’t solve the puzzles quickly enough then they will be melted, squashed, and destroyed in short order. The main difficulty here will be working as a team. This is the kind of challenge that is meant to throw some tension in between the members. Survival is often your first instinct after all and all of these characters want to live. Plus they’re strangers so it’s not like they are attached to each other all that much. Can they survive this?

Horror films and survival thrillers usually go by fairly strict logic of over 50% of the cast must die minimum. If you have 10 characters starting off then 5 will due. If you have 6 then at least 3, etc. Part of the intensity here is always figuring out which characters will die and which will live. Of course that’s assuming that at least one lives but it’s extremely rare for everyone to die. That’s usually left for pure slasher films or supernatural entities like the Grudge. For a survival horror like this one you figure at least one would live…right?

Of course I can’t say who lives here. Still, I think what stands out about the film here is that the premise is actually pretty fun. The idea of everyone being stuck in a crazy puzzle house like this and having to escape is a real blast. Each character is tested to their limits and you feel like the puzzles are fair for the most part. You’re actually given opportunities to solve each one if you put your mind to it. I guess at most the only puzzle that seems like it would be a stretch to figure out was the one involving the medical equipment. That one didn’t seem very fair and balanced.

As mentioned, I also thought the characters and writing were pretty good here. Joey is a solid main character and her high intelligence was established early on in the film. She’s able to contribute quite a lot. Now, she does have a cheesy scene at one point in the film where she comes up with a plan. The plan really should not have worked no matter how you slice it since without plot armor that would be game over so even though it was kind of portrayed as she made the right call, I would disagree.

Then you have Jason who is the most confident member of the group. Even when someone dies he is ready to keep on moving. He certainly seems the most uncaring among the group but at the same time you do realize that each second counts here. Several times just 2-3 more seconds would have made the difference in each round. So every time when the characters want to stop and reflect on what just happened and hold a mini funeral in their heads, you can’t blame Jason ducking out of there. You can hardly blame the others for grieving either since it’s hard to just pick up and move out but it’s why Jason was tough.

Mike was another really fun character. He’s having as good as time as he can with this and is clearly a glass half full kind of guy. Mike’s not going to get depressed and he comes in handy with the fishing. He clearly doesn’t take well to be disrespected either so he keeps the others in line. Next up is Amanda who looks really good as well. She started off rather rocky but we gradually learn more about her character. Physically she can hold her own with any of the others as she has a lot of formal combat experience. Amanda’s another likable character here.

Then there’s Danny who loves Escape Rooms and video games as I mentioned. You feel bad for him the whole time because he’s probably the only one aside from Mike having any fun. As he said “I’m playing the funnest game but with the meanest people” which really sums up his experience here. The others are always insulting him or being sarcastic. Yeah, he’s a little slow to realize that this is for real and not just for fun but it is hard to realize that this whole thing is a scam.

The only bad character here would be Ben who is constantly raining on everyone’s parade. He goes into the games with a bad attitude and never gets better from there. Despite this being life or death he is never interested in helping out or doing anything like that. He really needs the money so you’d think he would be more interested in helping out.

Having good characters gives the film a nice dilemma. In a lot of other films you don’t care about which character survives because they’re all bad. Think of a film like “The beast must die” where every character is a cannibal or into evil practices or “I know what you did last summer” where every character was complicit in murdering an innocent guy by the road. You aren’t invested in seeing who survives because they’re all just that bad. Here you’re just waiting for Ben to be defeated but that’s about it.

As the film goes on tensions continue to rise of course so things aren’t very smooth for the characters. I also liked the scenery a lot. In particular the ice level really stands out. A lot of effort was definitely put into the backdrops. The upside down level was another fun one with the phone ringer being a signal for something to happen. Even the opening level modeled after an office building was a blast. The final level’s probably the most boring one since there’s no time to explore with the walls closing in but on the whole this was visually a very impressive film.

Overall, Escape Room was considerably better than I expected. Maybe it’s in part because this is a horror film that doesn’t feel like one. There’s not a bunch of excessive violence for no reason. The film doesn’t revolve around shock value twists. (There are shocking twists for sure but nothing that’s just there to be super insane) The characters are good, the writing is solid, and the visuals are nice. The whole challenge thing is also a really fun gimmick like Tower of God, Phy Brain, or other titles like that where you have to clear a challenge quickly or die. Even for franchises I’m not a big fan of like Hunger Games, I always like that kind of survival aspect when it’s handled well. The film’s ending is also pretty great so this really makes for a complete package. I’m hoping the sequel is able to keep up the momentum since this is a rather high bar to keep up with.