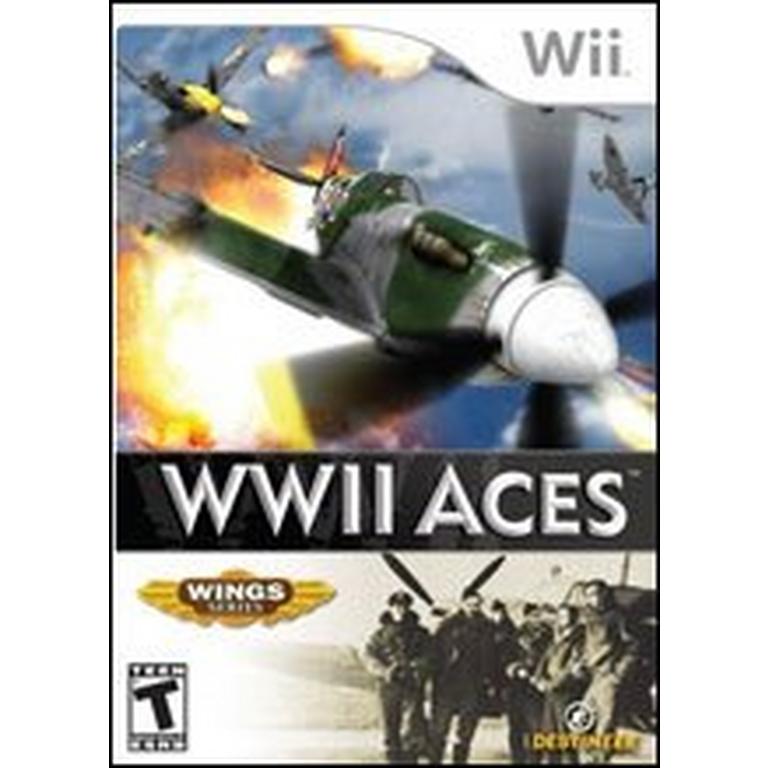 It’s time to look at an airplane fighter that I’ve had on the Wii for a very long time. I tend to enjoy airplane gameplay well enough like in Starfox but I prefer fictional plots so this game never rose that high. We are approaching Christmas though which means an onslaught of games is fast approaching and I needed a short title to see if I could beat it in time. This one was quick enough so I went through and conquered it. It’s definitely a well made game and one that you will have fun with as you master the controls but hold your controller real steady or the motion controls will mess you up.

The game takes place during World War II as you would probably expect. There are 3 campaigns to choose from. You’ve got Germany, Great Britain, and a third one where I didn’t recognize the flag. It appeared to be Russia. Each campaign takes you through 24 missions as you fight through iconic battles. It’s time for you to almost single handily win the war. Are you up for this?

To an extent this game can feel like a beat em up with how many enemies are on screen. There’s one mission where you have to take down over 30 fighters on your own. It’s always a satisfying feeling since you pretty much feel like a champ. Make no mistake though, this game is not very forgiving and you will have to stay on your toes at all times. The game really throws you into the action and doesn’t cover the important controls.

To describe the gameplay a bit more, you are in a plane at all times. Each level will give you an objective such as blowing up all planes or protecting ally ships. There is always a lot happening in each level so be careful not to focus too much on the mission or you’ll get blasted from behind. You have an unlimited machine gun but always let go of the trigger between targets so you don’t overheat the weapon. You also have unlimited bombs which are incredibly handy for attacking ground forces. It does take a few seconds for the bombs to reload but you have so many that it is rarely a factor.

There is one move that the game doesn’t tell you about though and it is a very useful one. In fact, it is the most useful element in the game and without it beating the levels is next to impossible. Holding down the B button slows down time and allows you to really fight the enemy ships. You are slowed down as well, but this helps fight off the motion controls. I basically had it on nonstop during every fight in the game. As soon as a ship would appear I’d activate it.  I think the tutorial should have covered such a useful move….

I really don’t see how you could stand up to the legions of planes attacking you without this. They are very fast so you have to turn a lot and if you miss the shots you’ll be wrecked by another ship behind you. Since you are incredibly outnumbered you can expect a ton of sneak attacks from the back. Another handy move is to do a barrel roll. I wasn’t using fancy tricks like that for most of the game but in the final two levels it is something you will want to do.

The toughest confrontations to have in this game are when a fleet of 5-6 planes are heading towards you. If you run or fly at them you’re gonna take a lot of damage. The best thing to do is fly towards them at an angle and barrel roll out of their line of fire. You can then snipe at least 2-3 of them as you head back. Their ships are almost as fast as yours so be sure to slow down at times to aim a bit better.

The graphics are very good. Each ship is pretty detailed and the game brings in different models for each country. There is a lot of good attention to detail here. You can see objects clearly even from a good distance away so there was good effort out here. Then you have the music which is surprisingly sound. The main theme sounds a lot like Final Fantasy music. I’m still pretty surprised at that to be honest. It’s just not what I would have expected to see here but it was a pleasant surprise. It makes the game feel a little grander in scope.

There’s definitely a good amount of replay value here. The 24 missions won’t take you very long at all, but beating them with all factions will help buy some time. Additionally the game is very difficult. It’s one of the harder games I’ve played as of late and as there is no level up system here the only way to conquer the level is simply to get good. There are no shortcuts to success here so you will just have to fight your way to the top no matter how difficult that may seem. Just keep on trying and eventually you will ace the level. If something’s not working I recommend just trying to beat the game from another angle.

Overall, WWII Aces is a solid game that is hampered by the Wii’s signature motion controls. It’s quite challenging so you always have to stay sharp. Aerial combat games often give me a tough time so I was glad that the levels are so short. At least this way I did not have to replay large sections of the game. If you still have a Wii and don’t have this game yet I’d recommend picking it up. I got it for around 2 bucks and that is certainly a steal. You’ll be glad you got it.