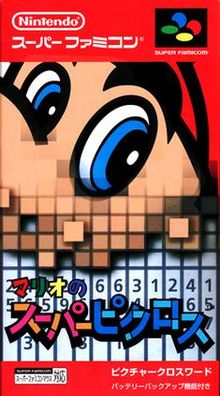 It’s time to look at a puzzle game Nintendo released a very long time ago. Thanks to Nintendo releasing a bunch of these old games for free if you have the Nintendo Switch Online package, I’ve now gotten to try it out. It’s definitely fun. I’ve always enjoyed Picross and find it to be a whole lot like Sudoku. The idea behind it is the same at least and I wonder if it’s actually meant to be the same game. Either way you better make sure you know your numbers.

There isn’t really a plot of course so right away you can just jump into the levels. After you complete one world you unlock all of the Wario ones to play as well. There seem to be 8 in total. The Mario worlds are played with standard Picross rules. Every time you make a mistake you lose a good amount of time so you have to be careful in what you select. In the Wario game you aren’t told if you made a mistake so if you do manage to trip up then you could be in trouble. It can be very hard to tell where you went wrong, much less getting back on track. It’s better to take as long as you need here and just not make a mistake in the first place.

So how do the rules work? Basically you need to arrange the tiles so that the numbers in each of the rows and columns make sense. For example the first boards have 5 rows and 5 columns. If any of them have a 5 that means you can check off every box in that line. If a row has 0, then cross out everything there. Gradually you will have created a shape. Once you have filled in every square the level is complete and you will see the artwork. As the levels go on the stages get larger and larger which means you have a lot more variables to consider here. I jumped to the final world after a bit and there you have 15 boxes in each row and column. That results in a ton of boxes overall so you really have to tackle this point by point.

That’s what makes the game pretty fun though. There always is a way to solve the puzzles. You may have to look at the stage up and down a few times to really get it, but you will understand the way out eventually. You just gotta keep cracking down on it until you get to the bottom of this journey. Search for rows with the maximum or minimum amounts first. If none of them exist then look for large numbers and you can try to decipher the final areas based on the corresponding numbers. It works a lot like being a detective here. That’s probably glorifying it all quite a bit but it’s enjoyable which is really what I’m getting at. The levels are pretty quick and direct. You should have a good amount of fun here.

The graphics hold up pretty well. The whole game is in Japanese so you may not be able to read the text but it’s still cool to actually se Mario talking like this. It’s not like it has never happened before but it’s rare enough where it is still very notable. The style used here just holds up very well. The soundtrack is less impressive but I guess for a game like this they were never going to churn out a big soundtrack. That would have been impressive though and I think it’s never a bad idea to throw more themes in there. The bigger the soundtrack the better right?

In terms of replay value I wouldn’t say that there’s much here. The game itself is fairly short. I’d say you can clear around 2 worlds in a hour. So maybe 4 hours would have you completing the whole game and I dare say that you will likely beat it sooner than that. So this is definitely one of those games that you play the whole way through but don’t go back to. That’s just how some games are set up though so nothing wrong with that. I’d say the journey is worth it.

Overall, You don’t really see a lot of games like this anymore. It’s a shame because franchises should dive in and take some chances like this. Who wouldn’t want to play a Mario chess game or something like that right? As long as the game has a good amount of content and maybe even a fun story then you’re in business. If you’ve got the Switch Online then you should definitely check this out. It’s not so major that I would say you need to get the membership just for this game though. If you don’t have it, then I suppose you should hold off.