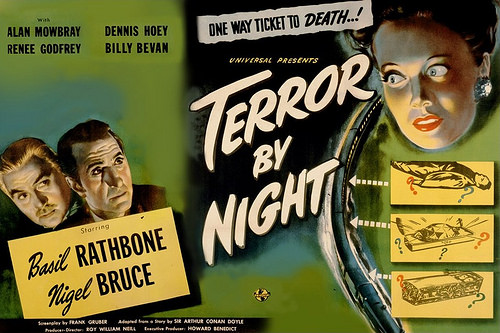 Sherlock Holmes has returned with another film. The villains just can’t get away from his extensive mystery solving skills. He is just not the kind of opponent that you want to risk toying with. This film is definitely a mystery movie through and through as we get a lot of suspects and a jewel that has been stolen. With everyone stuck aboard a train it gives Holmes time to interrogate everyone, but at the same time the villain has the edge of being able to act first. Holmes will have to bring his A game to win this match of wits!

There are a lot of parties on the train of course. For starters we have the lady and her coffin. It’s perfectly natural to bring a coffin on board since someone died after all but it’s rather large so someone could possibly fit onto it. There’s also the matter of the jewel that the rich lady brought on board. She has had it for many years, but this is the year where someone will finally try to snag it from her. To that end she wants Holmes to prevent this. Fortunately the cops are also on board led by Lestrade. Surely no criminal can get past the air tight defense of all these heroes…right? The elites are on the case so the villains should be very scared.

Watson’s old friend shows up which is certainly interesting. It makes sense that Watson will know some people since he isn’t with Holmes 100% of the time, but naturally since this is the character’s first appearance that will make you very suspicious. It’s like when any 00 agent shows up in a James Bond film. It raises a lot of red flags. We’ve also got a very confrontational character who doesn’t like the way that Holmes and Watson are always bursting onto crime scenes. While he may have a point it might also be an attempt to get them off his back. He intimidates Watson so much that the old man almost breaks down.

Then we’ve got the train conductor who really doesn’t want Holmes to snoop around. As far as he is concerned everyone needs a permit and to do things officially. He has a habit of writing things down as well which is awfully suspicious. Then of course we have the ladies from before. There is the rich one who is very adamant about Holmes protecting the jewel, but perhaps it is all an act to cover up the fact that she is attempting to fake the theft. There is also the younger lady who isn’t very co-operative and doesn’t like talking all that much despite seeming to know a lot more than she lets on. We’ve also got the tea thieves, but there’s not much to say about those guys.

Sherlock Holmes is on point as always. He’s still the same genius that he always is and learns a lot about the case right away. He solved it rather easily this time around as it was clear that he knew who the culprit was very quickly. He simply had to wait for some actual proof before coming forward with it. He played more mind games with the villains than usual here and substituting the diamond multiple times is a good way to always have control of the playing field.

Things get a little dicey for Watson as always. I don’t think it was his best appearance although he certainly came in handy towards the end of the film though so that’s a good thing. Useful or not, I’ve always been a fan of Watson and it’s easy to root for him. He may not be a genius like Holmes and his ego can get in the way at times, but Watson always tries very hard. You certainly can’t say that he isn’t doing his best to nab the culprit by the end. Even when the suspects get personal like in this film.

It’s been a while since we have seen Lestrade get some action so I was happy to see him return here. He actually looks fairly good here as he picks up on the final plan of Holmes before anyone else. That’s pretty impressive and he holds around 4 people at gun point. I do think that getting in a car with them is risky though especially since he has the villains driving the car, but this man’s a pro so who am I to point out the flaws in his plan? He also doesn’t let the passengers push him around the way that Watson does. Lestrade always assumes control.

Moran is the main villain here and apparently used to work with Moriarty. Naturally he is in disguise as one of the suspects mentioned earlier. You’ll probably figure out who it is right away but you’ll still be intrigued from start to finish on what his end game is. He’s a fairly good villain and definitely had a solid backup plan as well. He’d probably make the top 5 Holmes villains, but is still a step down from some of the others. His sidekick Sands is not very noteworthy though. The guy only appears for a few scenes and is easily handled by Holmes.

There isn’t much more to be said that I haven’t already talked about in these films. The Holmes movies are very direct so they are short and to the point. This does wonders for the pacing of the film and more importantly, it is backed up by impressive writing. You’ll be hard pressed to find any scene that isn’t written quite well. This is in fact one of the better Holmes films as it feels authentic from the start and isn’t trying to phone the plot in. Some franchises start to weaken after so many films but not this one.

Overall, I highly recommend checking this Sherlock Holmes film out. It’s a solid adventure with a lot of twists and turns. The atmosphere is just right and all of the characters are quite solid. It’s easy to see why this Holmes line of movies is so well known. It has completely earned its reputation and I imagine we will be lucky to ever see another depiction be quite as awesome. The current films do a good job but we’ll see if they can manage it for 10+ like this one did. I do miss how quickly they churned out films back in the day.