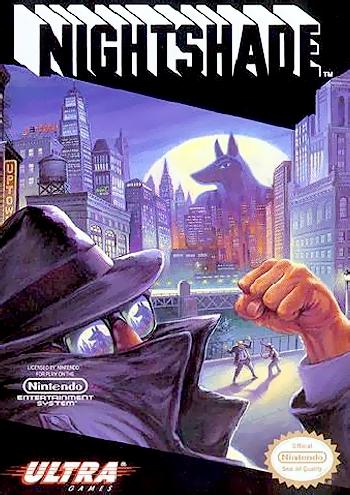 We have made it to the final new NES game added to the service by Nintendo. It’s definitely a very complex title with a whole lot of mechanics and such to learn. Unfortunately the idea was a little ahead of the technology in this case. It’s just not easy to seamlessly use your many items and the puzzles just don’t work as well as you would hope. The game isn’t all that fun and I would ultimately have to give it a fairly low score here. I just don’t see it being all that fun even if you were to progress further.

The main plot of the game is that you’re a detective on the trail of a villain. Unfortunately he caught you and tied you to a chair. I will admit that the opening of the game is intense as you literally start out strapped to the chair and have to slowly try to escape. The way to do this is to back up and cause a candle to burn through the ropes. It’s pretty interesting and not really something you see a lot. From there you work on escaping the castle and once you’re in the town it’s time to find where the villain is. I played the game for around an hour as I looked for the elusive villain. Let me tell you, that guy’s not easy to find. There are a lot of areas to explore and items to inspect.

The main gameplay style here is a 2D platformer but you are able to move up and down so I suppose it’s close to 3D. If you press the A button you can move a magnifying glass to inspect all kinds of objects. From there if you have a good hint of an object looks useful, press the B button to take out your other magnifying glass and inspect again. You get a different message that way. At this point if the object is even more interesting then click the select button to take out one of your items and try it out on the object. You can also pick it up if the thing you are inspecting is a loose pipe or something like that.

You’ll have a ton of items at your disposal by the time you finish getting out of the castle. The game doesn’t really explain any of this though so I recommend looking up the guide online for the controls. It makes a big difference knowing what you are supposed to do next as opposed to just stumbling through the levels hoping for the best. Not that’s a scenario that can get pretty dicey pretty fast. So I do applaud the fact that the game crammed so much in but I do think it comes at the expense of the actual user experience. At the end of the day you want these levels to be fun and you just don’t get that feeling of excitement from the game.

There’s even combat elements thrown in and I don’t feel like they were all that fun. It was pretty surprising though as a cop ran into me and then suddenly the game turned into a 2D fighter. The controls are really difficult though. It took me around 20 minutes to beat a female ninja that showed up. Apparently there are combos though so if you master those then that may make a good difference in the long run. Normal blows are easily blocked and countered by the A.I. here.

One more touch that the game added which was pretty nice is what happens when you die. When you lose a life you suddenly find yourself on a conveyer belt with the villain mocking you. Based on how interactive the whole time is I suspect that there is a way to break free but every time I reached for the lever the game told me I was too far away. I figure it was worth a shot at least. Then we get some images of the villain hanging out at a rooftop as some sad music plays. It’s all very atmospheric and works rather well.

When it comes to the graphics I would definitely give this game a thumbs up as well. It’s aged quite beautifully with the character designs being on point and the backgrounds looking quite nice as well. The music is good and so on that level the game succeeded. At least those background elements help to offset the gameplay. I think this is the kind of game that could do really well if it were ever remade in the modern day.

Overall, Nightshade is a very different kind of NES title. It’s a game that wants you to do a great many things. The fact that it originally came out with a part 1 in its title shows you just how ambitious the game was to start with. Clearly the developers had a really good plan in store for the series even if it ultimately didn’t pan out. I wouldn’t recommend this game. It’s just not really any fun and that’s definitely one of the biggest negatives I would hold against a title like this. At the end of the day you have to be fun.