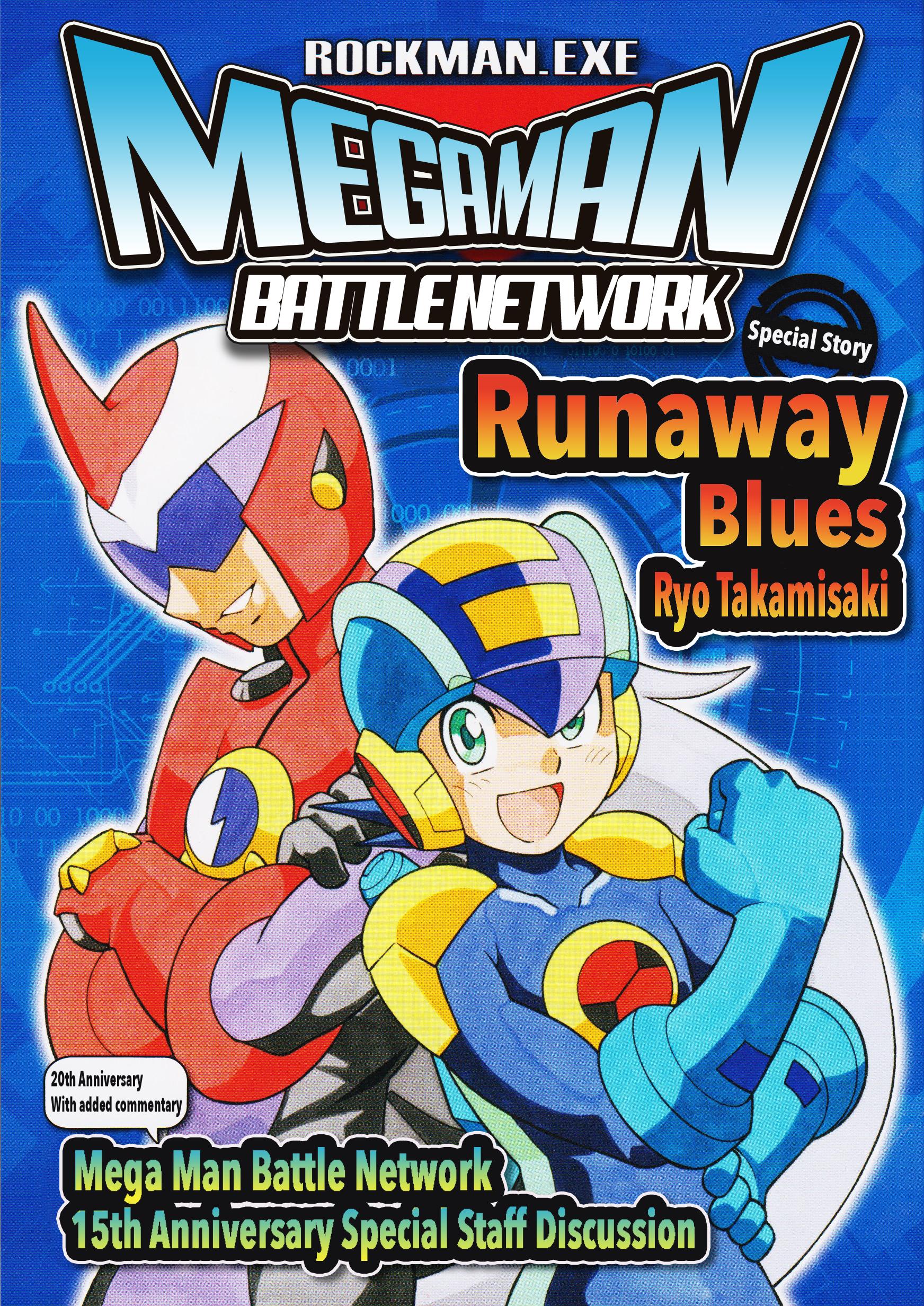 The Megaman Battle Network manga continues to be my favorite manga of all time. I think it’s fair to say that it will likely never be surpassed. It’s just way too good. Well, after all this time the author came out with a quick side story for it that’s pretty fun. It’s fairly quick at around 25 pages but it’s nostalgic seeing the old cast again.

It starts with Protoman showing up and letting Megaman know that he’s leaving Chaud. He claims that the Net-Op has been acting a lot different lately like telling Protoman to let the villains go or slowing him down intentionally to get more credit. Protoman wants a new operator who is super heroic. Lan and Megaman decide to find him a new owner but is everything as it seems?

The whole gang pitches in to help and you quickly see what good friends they all are. Not just anyone would step in like this without a second thought. Of course, sometimes that’s not always a good thing since you should hear out both sides. Things are not exactly as they seem of course.

We get a quick fight between Megaman and Protoman with the art getting you ready for a hype clash but unfortunately it’s over as soon as it’s begun. I suppose drawing a big action scene would probably take a while but you can tell that the artist has not lost his game. He’s drawing as clearly as ever. Capcom should approach him for more stories like this eventually and some kind of ongoing story. It’s been a minute since I read the series so I should probably re read at least the Bass fights again soon.

You’ll probably feel bad for Chaud here as he gets beaten up quite a bit. Everyone’s so quick to believe all of the charges against him as well so maybe Chaud does need to reflect on how he acts. Everyone turning against him can’t exactly be a coincidence now can it? Meanwhile Lan and Megaman may be a little out of sync compared to usual. Out of practice may be a better way to put it.

It’s hard to say when this takes place but in his prime you wouldn’t catch Megaman getting completely dominated like this. Lan also went in without a plan. I want to say it takes place a few years after the Beast saga which would explain why they have become so complacent. It was fun seeing a quick cameo of Searchman here though since he effectively missed the original series. Having a few of them show up would have been fun. If the story had been longer I think that could have made for a great plot.

All of the navis have to team up to take Protoman down which would make for a ton of excellent battle scenes. At this point in the story only Megaman and Bass would be able to take him down but seeing the others put up a good fight would certainly be pretty fun. There’s not a whole lot more to say about it since this is really just one chapter but the bottom line is that it’s a lot of fun. Even seeing the little kid who used to be a villain was nostalgic because he had a pretty big role back in the day.

Overall, This was a fun side story. It’s not like it’s got huge stakes or anything like that but we do get a quick fight and that’s about all you would expect from a side story. Of course it would be awesome if we ever got a full fledged sequel series. Now that would be pretty awesome to be sure. It could easily rise up there as one of the premiere titles. The art is just fantastic so you really can’t go wrong. If you enjoy the Megaman series then you should definitely check this one out.

Suggested by Megapot Network Dumbledore is a fairly talented wizard. He can conjure up spells with the best of them and don’t let his age fool you, the guy still has a lot of tricks up his sleeve. However if we’re being honest here, he still doesn’t have any chance against Protoman. Protoman is simply too fast for the old guy and the spell’s attack power doesn’t matter if he can’t even hit this guy. Protoman is really in a league of his own here and the gap between them is simply too vast. Dumbledore is 100 years too early to be challenging an opponent of Protoman’s caliber. Protoman wins.

James Bond is getting really close to reaching 100 battles. He has a gun, but it really hasn’t helped him that much so far. His next loss against Protoman is not going to help his record either. This is simply another drop for the agent and I doubt that it will he his last big defeat. Protoman wins.

Quest is back and now he’s up against Protoman! Protoman can move faster than light and one good slash can end just about any match. Quest may be an experienced warrior, but he wasn’t prepared to face such an opponent. Protoman won’t be going down in this battle and he’ll continue to rise up the blog ranks! Protoman wins.

Protoman is extremely fast and he’s a tough opponent to get past. His skills are legendary and very few can even hope to defeat him. Kamina definitely could not win against such a foe and he is doomed to take a loss in this round. He’s not a very likable character so it’s definitely for the best. Protoman wins.

This is one of those Power vs Speed matches! Well, Broly has extremely high levels of power and and his speed is pretty good as well, but he’s completely outranked in that department. Protoman’s also got some good barriers at his disposal as well as some great sword skills. It would be a pretty tough fight if Broly lands a good blow, but I think Protoman can win this round. Protoman wins.

Update, I don’t think Protoman would be able to keep up with Broly now. The Saiyan has ascended. Broly wins.

Sabata is one of those guys that you don’t want to underestimate. With a good slash he can do some major damage. Of course Protoman has the big edge in speed. He’s much faster than Mach 5 and has been shown to keep up with guys like Megaman! Now that’s pretty impressive. Protoman wins.

Searchman has his guns and with them has done some massive damage. Of course Protoman’s always a step ahead of him. Protoman’s much faster and stronger than Searchman. Searchman may be very accurate, but in the end he won’t be able to land a shot on Protoman. Protoman’s just too fast. Protoman wins.

Protoman is back and this time he’s up against Vineman! Vineman’s a tough navi and with his plant powers took down World 3 back in the good Axess days. In the manga he’s possibly even tougher and was beating Protoman! He has help, but if they were to fight now Vineman would be doomed. Protoman’s too fast and strong. Protoman wins.