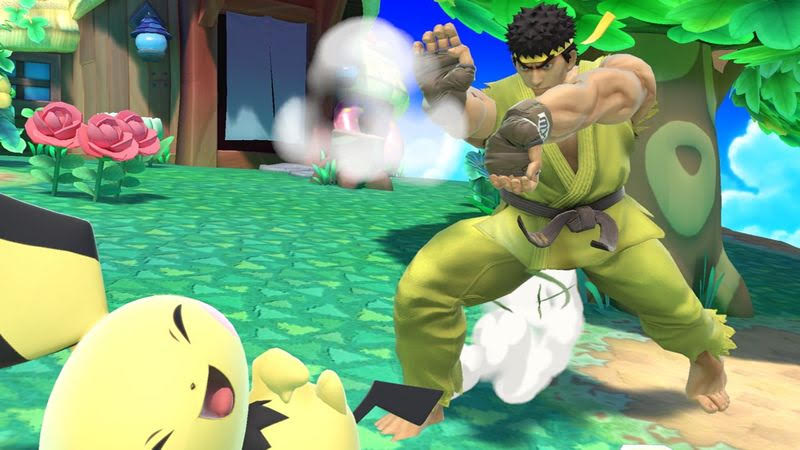 Suggested by Sonic Pichu is incredibly fast and is definitely known as one of the stronger Pokemon. That being said, he definitely isn’t ready to take down Ryu just yet. Ryu has enough durability to take Pichu’s shots long enough to counter with his own. Additionally, his attack power is high enough where that one counter punch could end the match. There’s a big gap in their abilities which will be incredibly difficult to overcome. Ryu wins. 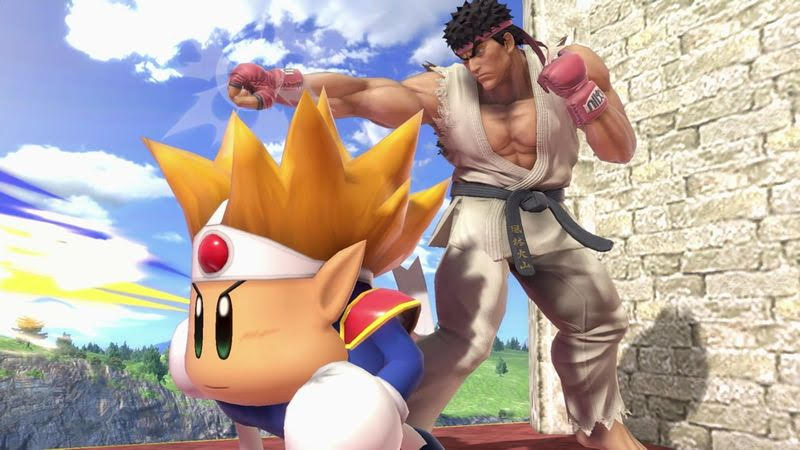 Suggested by Sonic Knuckle Joe is a pretty powerful boxer who can hold his own in a fight. He may not look terribly formidable, but appearances can be deceiving. If you underestimate this guy then you’re gonna be in a world of hurt. Fortunately Ryu doesn’t underestimate his opponents and does have the expertise needed to stay one step ahead. His power and speed are also above Joe’s skill level which is important. Ryu wins. 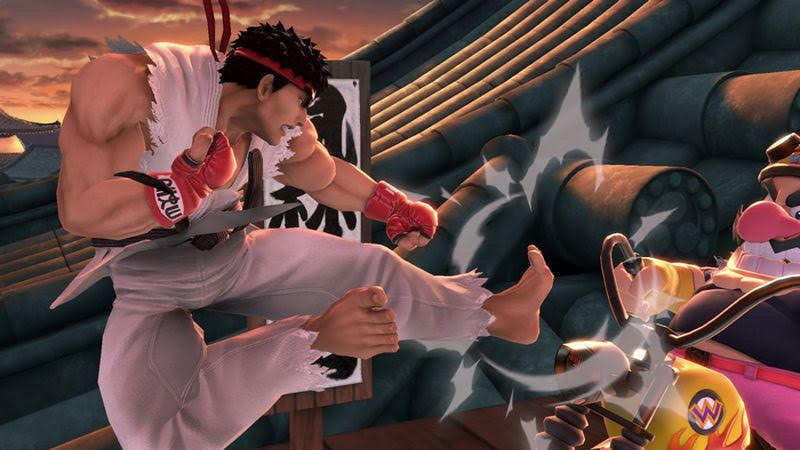 Suggested by Sonic Wario is a pretty tough guy who definitely doesn’t mess around. He has his Wario Man form and has gone toe to toe against Mario in the past. That being said, I really feel like Ryu has the edge here. Not only is he a lot stronger than Mario, but he’s also got better martial art skills and has superior speed feats of his own. Wario will have a very hard time trying to keep up with this Street Fighter! Ryu wins. 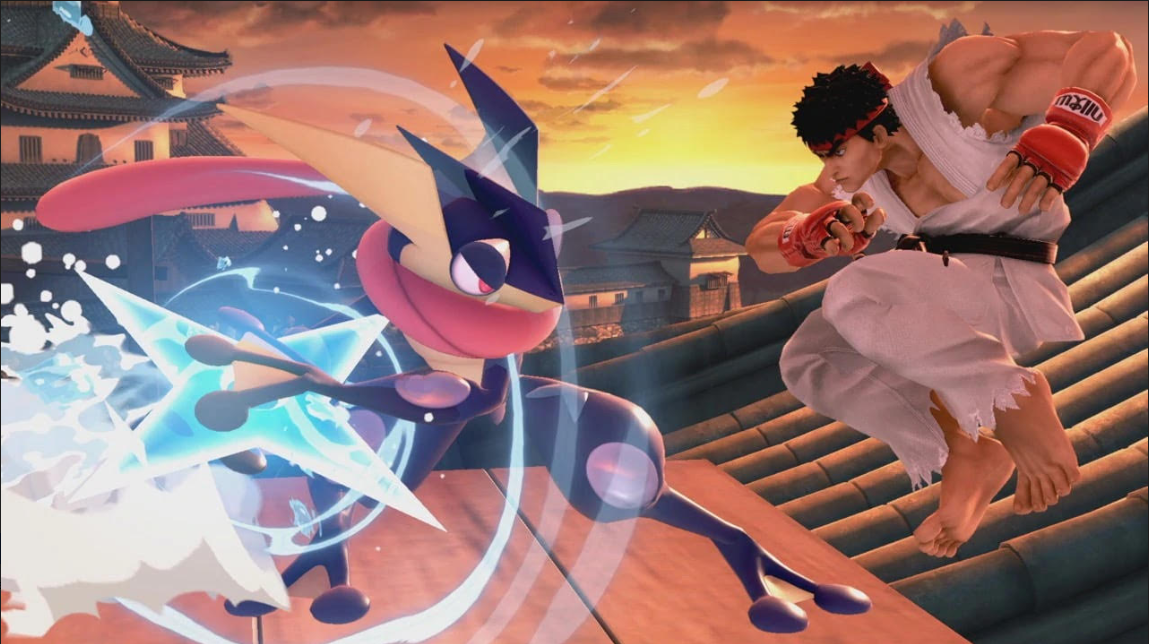 Suggested by Sonic Greninja is a pretty tricky water type to deal with. He is good at close quarters combat and landing precise blows to chip away at the enemy. Ryu is an experienced fighter though so he should be able to dodge or block most of the hits. His experience has served him well over the years and I don’t think this match will be an exception. Ryu just needs to focus and he’s got this. Ryu wins. 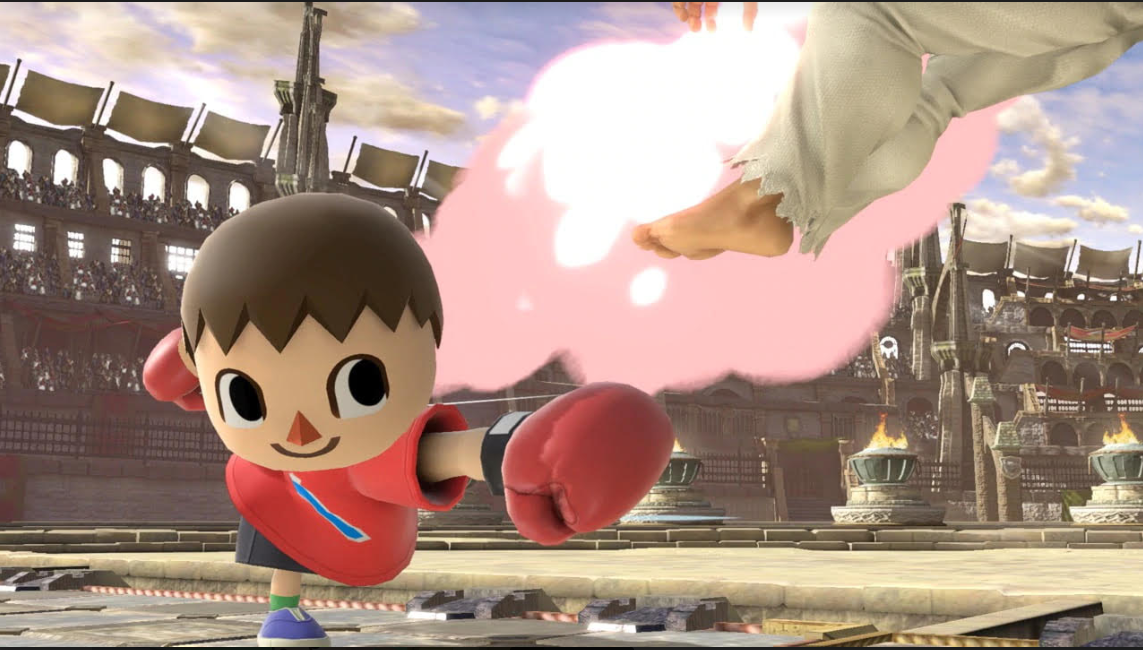 Suggested by Sonic Villager is a nice kid who really knows how to use a lot of different items to his advantage. What he lacks in special abilities he makes up for with strategy. It’s not going to be enough to deal with someone like Ryu though. Ryu has a great deal of power at his side and also has access to dark abilities. When you mix those two elements together there just isn’t a whole lot of room for Villager to do much of anything. He’s simply outmatched by that point. Ryu wins. 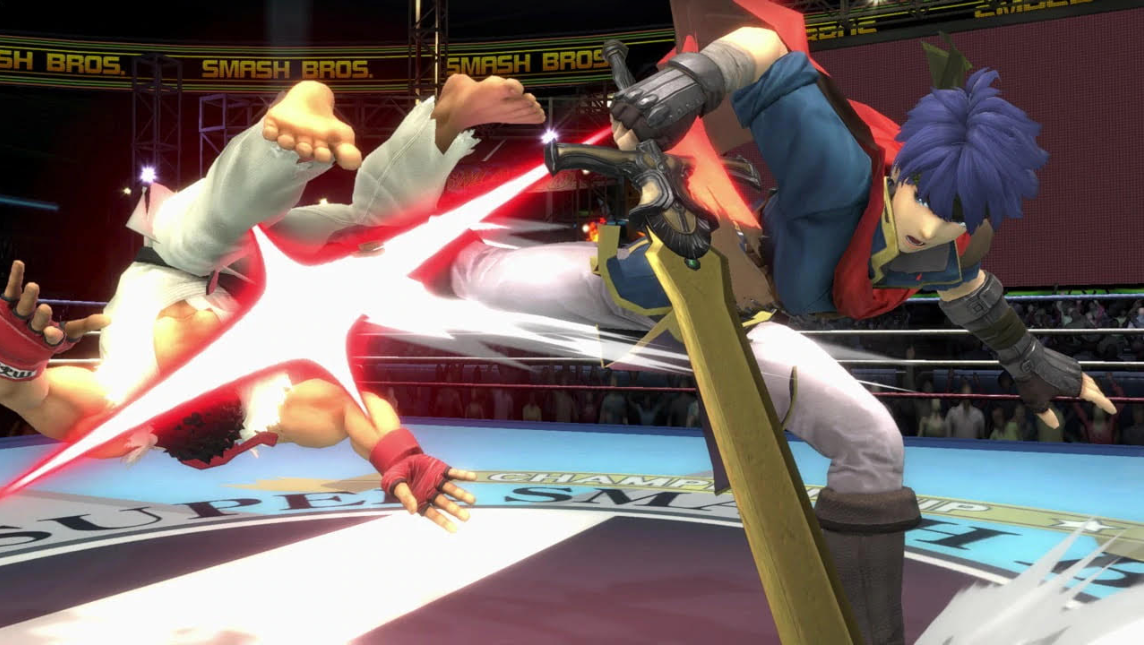 Suggested by Sonic Ike is a powerful swordsman, but there isn’t a whole lot that he can do against Ryu. Ryu has learned to control his dark powers and even fought Asura to almost a standstill. He can probably snap Ike’s sword in two and from there the match will be as good as over. Ike can’t keep up with Ryu’s speed or power so he will end up being completely overwhelmed. It’s all over for him now. Ryu wins. 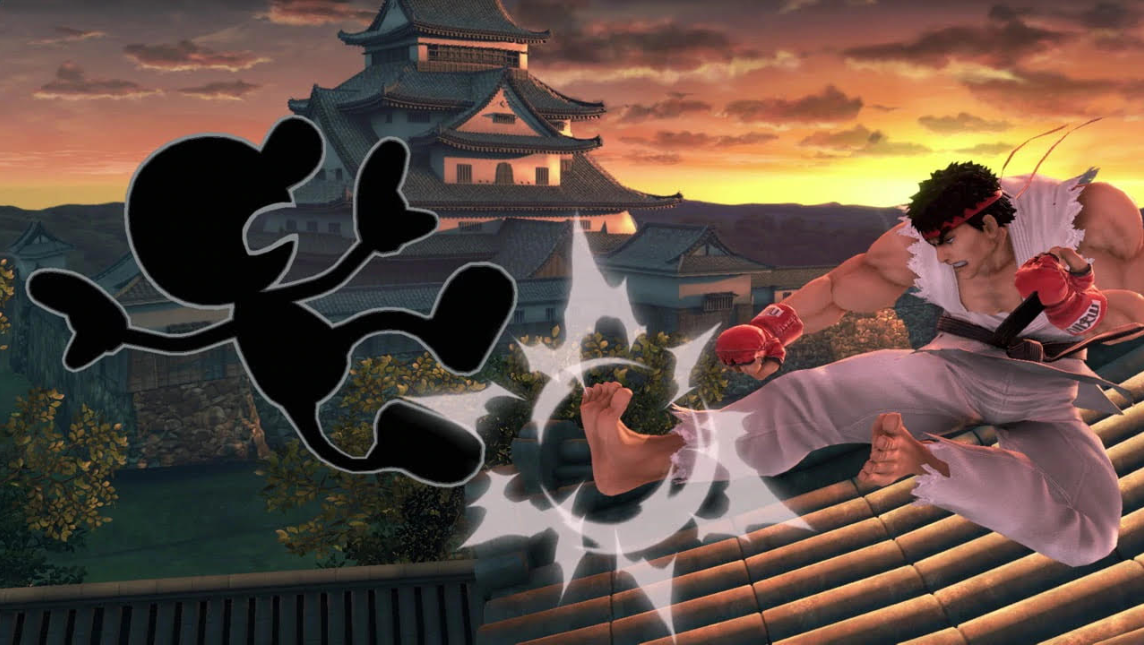 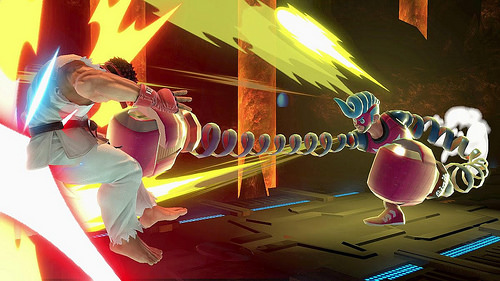 Suggested by Sonic Spring Man is a pretty good fighter. Not only does he have the proper fundamentals that you would expect from any hand to hand fighter, but he can launch his fists to attack from long range. Unfortunately that doesn’t mean much to a master of the fist such as Ryu. Ryu has trained all his life to be the best fighter that he can. His discipline is far greater than that of Spring Man and he also has the Dark Hatsu at his disposal. Ryu can easily crush whatever attacks Spring Man launches his way. Ryu wins. 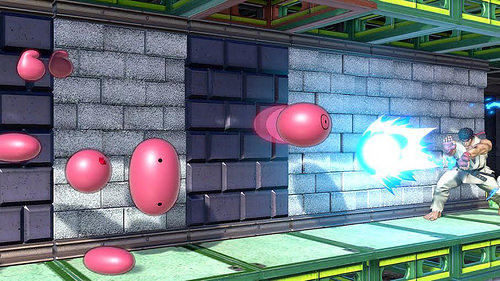 Suggested by Sonic Sukapon is physically quite strong as he is able to lift people up in a choke hold. That being said, taking on someone like Ryu is still not something he is ready for. Ryu is strong enough to crack planets and likely destroy them in an instant. His speed is on a whole different level as he was keeping up with Asura. Ryu wins. 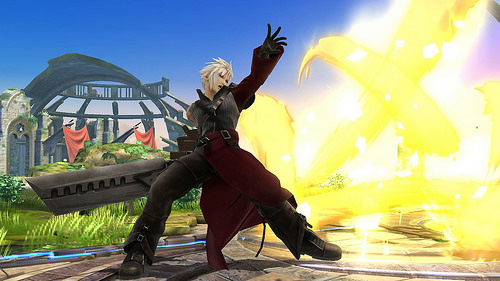 I consider myself to be a freemium player most of the time. Whether I’m playing Pokemon Go, Super Smash, or Mario Kart, I just don’t buy DLC. It doesn’t feel right that big companies are selling us 60 dollar beta titles instead of wholesome games. That being said, the first time I really compromised on this was with Super Smash Bros. There are multiple 5.99 characters that came out like Ryu, but I mainly just got him to stay cool. It’s when Cloud and Bayonetta showed up that I realized they were necessary for me to keep on playing. I’m not a casual Smash player after all, I’m a pro. I need to stay at the top of my game so when a better character shows up I have to ditch my main instantly. Here are 5 reasons why I paid the 5.99 and why you should as well. 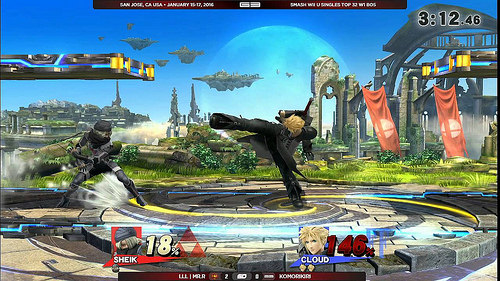 My original main was Sheik. I’d work long and hard to perfect really advanced 10+ hit combos where I’d finally tack on 50% or so and feel good about it. With Cloud, I can rack up that % with a mindless up air string. I can get it even easier with Bayonetta as I just hold Side B then do Up B and keep repeating until my opponent is dead. There is no skill necessary as you just need to learn one easy combo and you’re set. You’ll instantly see your results go up and you’ll become a legitimate tournament threat. That sounds pretty good doesn’t it? You’ll probably feel bad at first as this all just seems too easy, but you’ll eventually be able to justify your decision. Just look at the picture above. If you’re playing Cloud, your opponent will never go over 100%. 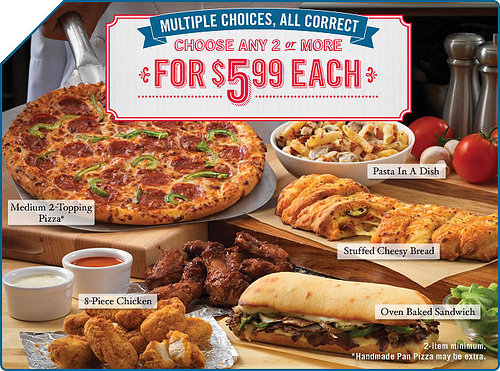 What else would you spend 5.99 on? You can probably get half of a Subway’s sandwich and a drink with that or a 2 slices and soda deal from Little Italy but those things will be gone in minutes. Your DLC in Smash will stay forever. These characters will become memories that you can keep with you through the years as you look back on what a great investment it was. It’s not just any DLC…it’s the right DLC! Domino’s Pizza is amazing, but not even that can beat out a new character. 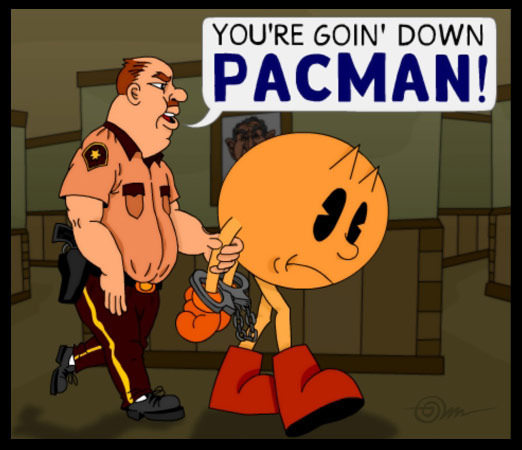 I mained Fox in the first three Smash games. I was determined to main him here as well but he just didn’t click for some reason. That’s why I moved to Cap and then to Sheik. Finally I found Cloud/Bayonetta and I knew that it was time for a change. Why wouldn’t I play these characters when they are just better than the others. I know it’s tough to let go of the character loyalty at first, but once you do you’ll be glad that you did. It’s particularly sad for popular characters like Pac-Man who have a lot of fans but aren’t exactly destined for greatness in this game. By all means, keep him in the pocket, but play Cloud for all of his bad matchups…and then play him for the good ones as well. Not saying tiers are real…but we are paying to win.

4. You can be one of the cool kids 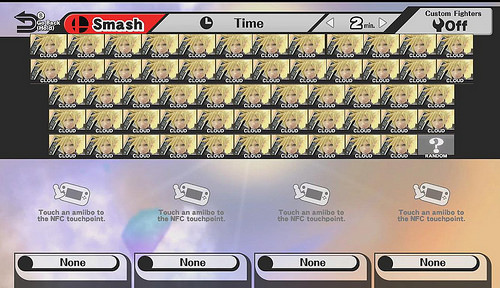 Everyone plays Cloud now. He’s won almost every big doubles tournament in Super Smash after all. It’s basically necessary to play this guy because of how overwhelmingly overpowered he is. If you don’t pay the 5.99 you won’t be able to wear your snapback with pride. You will get dirty looks from the rest of the players if you choose the free version of Cloud, aka Shulk. You just have to pay the money if you want to stay with the popular crowd and I don’t know about you, but staying in that crowd is necessary for the memes. You don’t want to fall behind the curve.

5. I’ve prepared myself for the future

Finally, I’m now ready for the future. DLC isn’t going away, in fact it gets stronger and stronger every year. Before you know it, most of the characters in a game are going to be DLC. Just look at Street Fighter V or SF X Tekken. SF V is almost going to literally be half free and half dlc characters if it keeps going at this rate. You’ll be missing half of the game if you don’t do something. By paying the 5.99 now, you’ll be able to justify the 59.99 once you’re buying a 60 dollar beta and have to repurchase it. You’ll be paying hundreds of dollars in nickels and dimes by the end so you may as well get used to it.

In short, Pay to Win is a very successful way to run a business. You want to have the money on deck and these are the reasons why I paid the 5.99. Ever since I did, things have looked up. I use the extra time that I get from not needing to practice combos to smack talk on Reddit and Gamefaqs. I use all of my extra wins and glory to reaffirm that this was the right call. It all just works out and so now you too should pay the 5.99 and show the corporations that you support this business with your dollars. If not, I accept any challenges to show why my Cloud takes on your free characters. 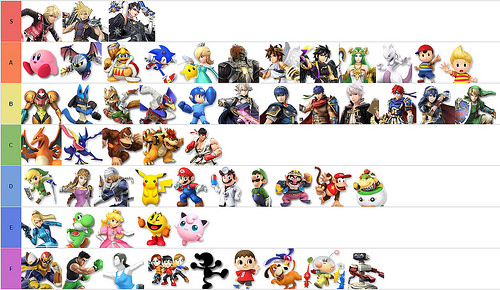