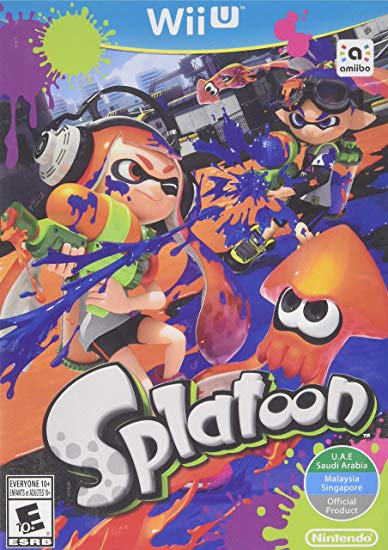 It’s time to look at one of the biggest new Nintendo IPs. When this game first came out it was getting a lot of buzz. After all, it seems like Nintendo hadn’t had a new IP in a while as typically we just got more games for the established series. This would also be a shooter which is very different from what they usually churn out. After playing it I can see why this game was such a big hit. The multiplayer is definitely the big appeal for this title but it does have some single player content to keep you busy as well.

The basic plot of the game is that the big electric fish has been stolen. The main character is quickly brought into a secret task force in order to combat this threat. He has to find out who is responsible and put a stop to this madness. The kid is up to the task and is equipped with an ink gun. As he is part squid, he can use this to his advantage. The actual story isn’t particularly long. It’s a little under 3 hours so you’ll breeze through it. Still, it works as a pretty good tutorial. You’ll learn all the basics in terms of shooting and movement. The levels aren’t too hard, but are challenging enough where you will need to use some strategy. Prepare to get destroyed when you first go online, but you’ll pick up on the controls right away.

The gameplay is that of a third person shooter. You use your ink gun to blast away at the enemies. The objective of the match is to paint the stage in your color as much as possible in multiplayer and to simply make it to the end of the level in story mode. As the game is very team based how you perform will depend on your teammates. Unfortunately I don’t think there is a single player option for online, but I guess the point of the game overall is about teamwork. If you decide to try and do everything on your own then it simply won’t work. That being said, I was able to get a lot of players in my second round when I tried that tactic. I still wouldn’t officially advise it.

Of course, this game has been out for several years and the sequel is already in stores as well. As a result, finding a match can be pretty hard now. It took a little while for the game to put me in a fight and the first time it actually kicked us out since we only had 7/8 of the players needed. Once you do get in it’s a blast but this is definitely the kind of game that loses a bit of its appeal as it gets older. You’re better off just jumping right into the second game which is certainly very active and will stay like that for a very long time.

The multiplayer automatically adds a bunch of replay value and there’s more stuff to do in single player mode as well. Try to grab as many orbs as possible in order to level up your equipment and continue on your goal of being maxed out. In Multiplayer each match gives you coins which you can then use to buy new clothes and such. It’s a nice incentive system and Nintendo clearly put in a lot of work here. Nothing about the game feels like it was given anything but their best effort. It’s a shooter that is easy to pick up but there are enough mechanics where training will feel like it pays off.

The soundtrack is very lively and energetic. I don’t think I would put it in the same conversation as something like Mario of course, but it’s reasonable to say that it will age fairly well. I look forward to seeing what tunes are in the sequel although they may start to blend together. The lore around the universe is a little less interesting to be honest. I don’t really care much for the setting and the plot could be a bit dull. This is a game that lives or dies on its multiplayer so make sure that you have a good connection before playing.

The graphics definitely look really good. The sharp colors have aged very well and this is the kind of Wii U game that can try to pass for a Switch title. You won’t have any complaints with the technical merits of the game. Again, if I had gotten this game a little sooner I think it would have had a very strong case for being an 8 star title. Alas, I have to dock a point since there aren’t nearly as many people playing it now and that will only grow more apparent as the days go by.

Overall, Splatoon is a fun game. I’m glad that I finally got to experience this title to see what all the hype was all about. It’s certainly deserved and I’m sure that I’ll probably grab Splatoon 2 a little sooner than it took me to get the first one. Maybe now this will give me more of an incentive to play the Inklings in Smash. Regardless as I mentioned several times, while I recommend this game you should probably just go and get the 2nd one. This game will probably be dead before you know it. The fan base is loyal enough where I’m sure some will stay with this one for years, but not enough to consistently get a match whenever you want. That won’t be a problem with the sequel.