This game doesn’t even save your stats so none of those here! 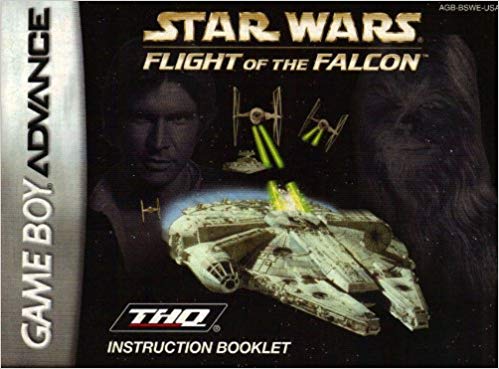 It’s rare that I play a game that falls under a 5. For the most part there are usually fun things to enjoy in a game so I won’t be giving it a downright negative score. That being said, Flight of The Falcon is definitely one of those. It’s limited by a lot of things including poor level designs and the lack of a continue feature. Mix em all together and you’ve easily got the worst Star Wars games and it ranks as one of the worst titles that I’ve played. I don’t know what this game was thinking.

The game very vaguely follows the plot of the original trilogy. The levels have you flying around in the Falcon as you blast away at enemies or try to make it to the end goal in the time allotted. There are 14 levels but good luck seeing all of them. They are divided into 3 chapters. Once you’ve lost all your lives and continues you’re taken to a game over screen and start back from level 1. You can put in a password so that you can continue but it only takes you to the beginning of a chapter. So for example, if you lose on level 6 then your only options are to start over at level 1 or skip to level 7 which starts chapter 2. There is no way to return to where you started.

Even for password save games this is a bit much. I can’t think of any other game which is so restrictive with the continue feature. If you ask me there wasn’t a whole lot of quality control done on this game. It seems like they really slapped it together. Aside from this, the level designs aren’t any fun either. They all drag on for too long and there are glitches everywhere. The only real way to beat level 2 is to fly straight through the buildings. If you zoom straight ahead and start to turn then it’s like the building won’t exist anymore. You can just go through it and save some seconds. On the other hand, sometimes the building will appear and you’ll end up dying. One hit to the terrain is instant death of course.

You can expect to die a lot of times here. This game is super difficult, but not in a legit way. Throw in some good levels and it would be a pretty reasonable game. The objectives aren’t even clearly defined as you can easily get stuck in a level because you aren’t sure what to do. Some levels have you taking down enemies while others have you rushing towards the goal. Apparently you can determine this by looking at a small indicator near the bottom of the screen. Good luck looking for that one!

The graphics aren’t anything to write home about either. The sprites are very blurry and the camera literally can’t keep up when there are too many objects on the field. As a result you’ll die to invisible things in some of the later levels. A meteorite didn’t properly load so you bump into it and then it appears. Whenever you die like that it definitely does not feel legit. The soundtrack is also pretty bland. There’s nothing to it and I’m sure you’ll forget it within minutes of completing the level. It’s a shame, but the game had no soul to it.

Naturally that also means there isn’t a whole lot of replay value. If you can ace the levels you can beat this game in under 2 hours. Otherwise, you can also be here forever if you don’t conquer all of the levels. I beat the first 5 and then beat levels 7-8, but I’m not about to start from scratch every time I get a game over. I called it a day here, but call me back when the game gets an HD remake with a save feature that works. The password system just hasn’t aged well and this game takes it as low as possible.

I tried to think about any positive aspects of the game, but I’m running on empty here. I suppose the loading screens are pretty quick. You don’t have to worry about getting bored there because the levels do come up fast. Maybe that’s because the game doesn’t have to bother loading much since the game isn’t saving anything anyway, if so that’s a silver lining I suppose. Most of the cutscenes start out with 10-20 seconds of nothing happening though so I think the budget for the animations was probably pretty slim. There’s nothing exciting about seeing a ship move in slow motion for ages until the cutscene ends.

Overall, Flight of the Falcon is a game I’d recommend avoiding. Unfortunately it snaps Star Wars’ streak of solid games all around. I suppose when you get enough games you’re bound to run into a bad one at some point. The concept isn’t bad and at least it’s a unique style, but the execution was just really weak. I can’t say that I’ll be missing this game and hopefully the next GBA title in the series is a lot better. I can’t see how it would be worse to be honest so it should be uphill from here on out.