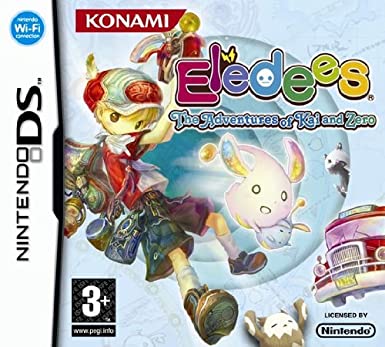 It’s certainly been a very long time since I started this game. I got in pretty deep to be honest, but unfortunately I hit a glitch and had to start over. I pushed that off for around a decade but now it was time to finally do it. This is a fun game that is held back by a few items. I would ultimately not recommend it too highly simply because there are just many better games to choose from. Still, if you really like the Elebits then this will allow you to get some closure at the very least. Otherwise the series appears to be gone for good so I don’t really think we’ll be seeing any Elebits in the near future. It’s a shame but that’s just how it goes.

The plot starts with Kai talking to us about Elebits. Essentially they power the whole planet as they are this world’s version of electricity. Without them we’d all be doomed. Kai’s a little jealous of them though because his parents research Elebits so they are rarely home. One day he gets in his dimension hopping bus and finds himself on a whole other world. The citizens there tell Kai that his Elebit is a legendary one known as Zero who will end up saving the world. Kai doesn’t believe these guys because that is a bit of a tall tale but still, he does have to get home so having a powerful Elebit will help. The bus explains that he needs energy and directions to get back home so Kai’s going to have to keep capturing Elebits until they find some maps to go home. Will Kai ever make it back to his planet?

Most of the game’s about the journey as you travel from planet to planet. We do get to squeeze in an end of the world plot near the end of the game though which was pretty impressive. One of the Elebits is going crazy and he’ll destroy everything if we don’t stop him. This part of the plot may feel like it comes out of nowhere but there was technically some foreshadowing for it I suppose so we’ll count it. I’m always glad to have a hype climax so either way I was pretty cool with this. The boss battles in the game tend to be its high point. I thought all of those were handled rather well. It can be tough to know what to do at first since the game doesn’t really even drop you any hints but you’ll figure it out. You’ve only got so many Elebits after all so eventually you’ll find the right one to use.

That’s part of the game’s weak point though. It never really lets you know what’s going on and while in a boss context that works out all right, it makes things a little tricky in the puzzle sections. A lot of the time it feels like you’re just stumbling around blindly without a clear plan of what to do. Some sections would take me ages and others I couldn’t figure out on my own. The stages don’t always make a lot of sense and they expect you to use your powers without ever being taught how. As dicey as this is, it could work if not for the fact that you run out of energy so quickly. Each Elebit consumes energy whenever they attack and if you run out that’s it. It takes forever to stock up energy again depending on where you are so then you have to go back to the bus and start the labyrinth again. It’ll be shorter since most puzzles stay completed once you leave them but others you just have to do again. Whenever I had to backtrack that part would be a bit annoying.

The core gameplay involves moving and tapping on Elebits with a stylus. You have your Elebit absorb them after tapping on the creatures. This gives you back energy which you use to open gates, use Elebit moves, or upgrade the Elebits. I’m not sure what the benefit of upgrading the Elebits was so I didn’t even bother doing that. By the time I’d have enough to max most of them out the game would be over anyway. The campaign itself is close to 9 hours which is pretty solid. There’s also a ton of replay value to keep you busy including a bunch of extra Elebits as well as upgrades. If you get this you’ll be in a better spot for the final boss although to be honest there isn’t a huge incentive to doing so. The bosses are fairly easy compared to the puzzles either way. Trust me, the puzzles are what will likely slow you down the most. It’s just hard to get around those.

The graphics are okay. I don’t think they’re low quality or anything like that but it’s going for an odd style. The artwork’s not all that great to look at. It’s sort of going for a gritty style that’s fairly realistic despite this being a fantastical game. It’s all very dreary as opposed to the bright colors you would expect from Elebits. Even the cutscenes use this style which is unfortunate. The gameplay loos a little better at least. I’ll give the soundtrack props though. The themes are pretty solid and we even get a big song at the end. I was not expecting that and it definitely made the game’s climax that much more emotional. I was not prepared for such an ending.

Overall, How much you enjoy this game will depend completely on how much you enjoy puzzles. The game is filled with them and I’d make the case that it’s the core of the gameplay. Moving and tapping the screen are really just here so that you can complete these puzzles. The boss fights are fairly rare so they don’t take up a whole lot of time. The vast majority of the gameplay is just navigating. I still found the game to be fun enough, but it would have benefited greatly from two factors. 1: You shouldn’t run out of energy. Give the player unlimited energy when working on the puzzle or something. Nobody wants to have to restart because they’re out of energy. Additionally I would reduce the amount of puzzles. Give me more platforming instead as I capture Elebits. Those two aspects would definitely make the game more fun.