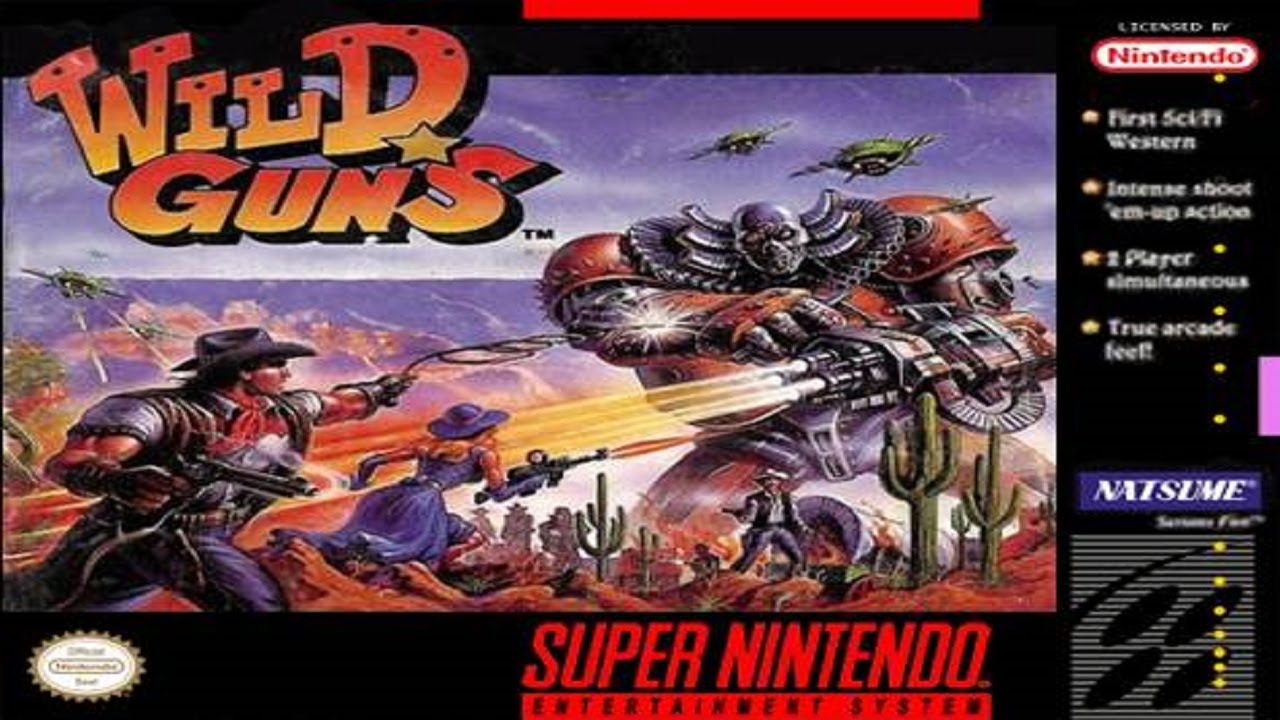 It’s time to look at one of the newer SNES game to be added to the Nintendo Online Service. Wild Guns looked good right from the jump. It’s a shooter that was well ahead of its time and the gameplay feels like it is N64 level at the least. It’s really a blast and definitely one of the strongest games I’ve played in this catalogue. I’d highly recommend it and while the game is still pretty short, it’s longer than some of the others I’ve checked out.

There doesn’t seem to be much of a plot but basically a bunch of robotic villains have taken over various towns. Your mission is to take down all of these bandits and robots with your trusty gun. The gameplay is a pretty fun. It’s a third person shooter where you have to take down enemies until a time limit runs out. At that point the boss will show up. The more enemies you take out, the quicker the timer will run out so you want to keep fighting at all times. When the boss shows up you defeat him and move onto the next area. There are 3 areas per level and around 5-6 levels in the game. You should have this taken care of in around an hour I’d say. You’ll get the hang of shooting and moving a lot as the game goes on.

A single shot takes you down which is pretty realistic so part of the strategy in the game is never getting hit. You can jump from side to side as well as use basic rolls. What you typically want to do is fire off a few shots and then run a bit. If it’s 1 on 1 with a villain then you can just start blasting since they can’t counter but there will almost always be a ton of enemies shooting at you. The final levels are especially difficult with this as it can be hard to find a single moment’s rest. If you get yourself into a bad situation is can be virtually impossible to escape unharmed without rewinding a bit. So an important thing to factor here is your current position as well as the next few. Predict their moves and all that.

One of the reasons why this game is so impressive is because of the boss designs. They all look quite good and are very creative. As I mentioned, the game seems pretty ahead of its time in this respect. The level designs are all unique and the gameplay is just so smooth. This is the kind of shooter video game that I can really get behind. There’s clearly a lot of thought and development time that went into this one. Even aiming the guns is pretty interesting since you sort of have to move while firing until you got the cursor just right. Then you have to get ready to move again since by then the villains will be starting to shoot at you. That’s where all of the strategy comes in.

It pretty much goes without saying that the graphics here are quite good. Even taking the designs out of the equation, everything just looks so modern and solid. This is an SNES game that has really aged well in that respect and I’d be up for a sequel to this game. I heard something about an Unloaded version so maybe the game already got a sequel or some kind of big remake. Either way until you check that one out, this is the one you’ll want to look into.

Overall, Wild Guns is definitely a solid title. Hopefully Nintendo doesn’t wait so long for the next batch of games but at the very least this is already shaping into a very strong batch. It’s going to be very difficult for the other SNES games to quite match this one. There may not be any real replay value after beating the game but the campaign is strong enough to hold its own. The game is pretty difficult and it’ll take time to get used to all of the different weapons. Once you have managed to pull that off then you’ll really be a pro at this game and can hang your head high.