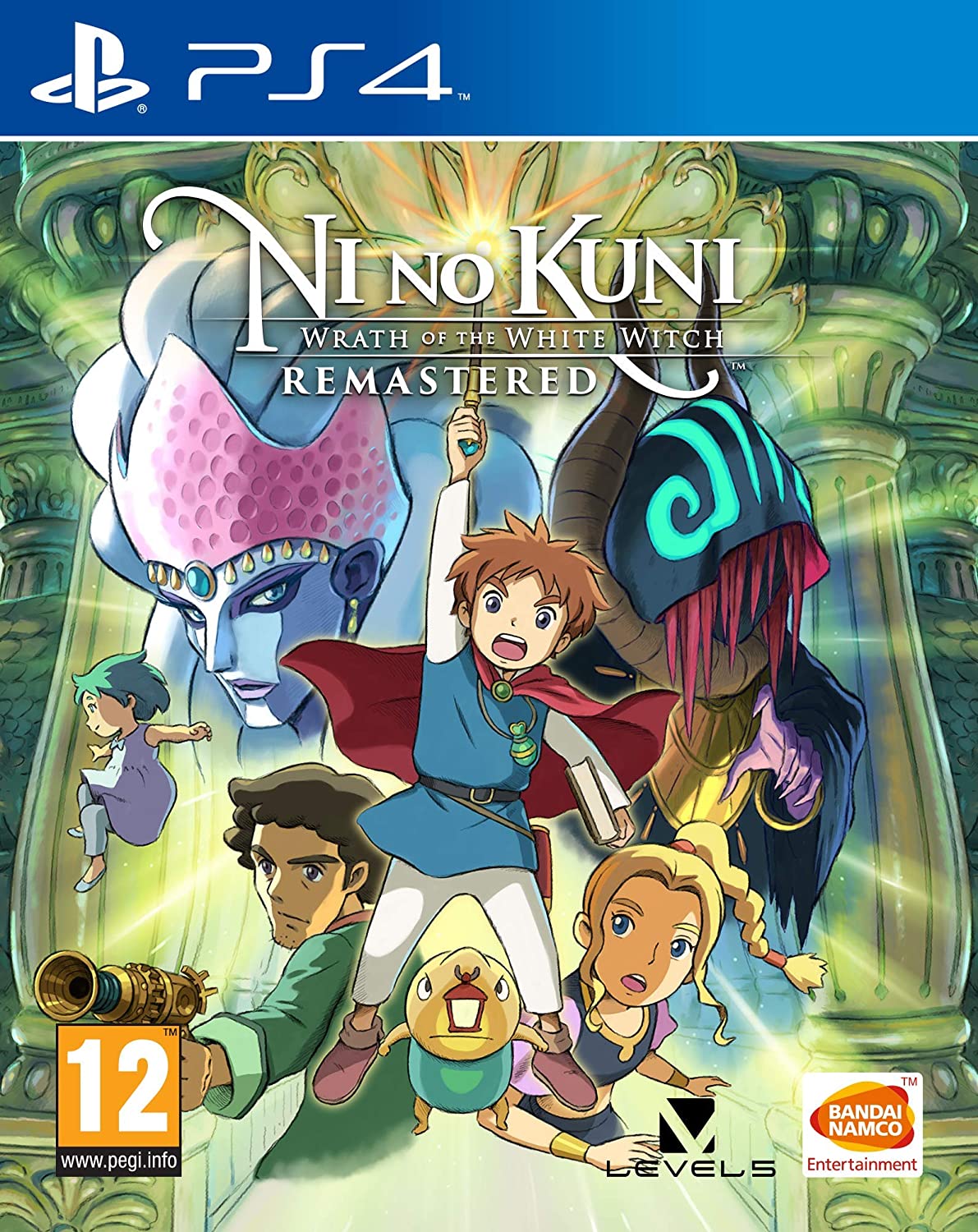 I was never all that familiar with the Ni No Kuni title. I had heard of it since Level 5 games always get a good amount of publicity but I can’t say I knew anything about the plot. Well, it was definitely a very satisfying RPG and a rather long one as it took me a full 30 hours. After playing it I can definitely say that this is a winner and a really solid title. It’s also unique enough where you can’t call it quite like any others. I would certainly like to see more games in this series.

The story introduces us to a kid named Oliver who decides to go out one night to try out his friend’s car. Unfortunately he ends up crashing and while Oliver’s mother is able to save him, she dies in the process. Now Oliver is broken inside as he blames himself for this happening. One day his stuffed animal Drippy becomes sentient and lets Oliver know that there is still a way to save his mother. See, there’s a parallel world where everyone has a double. If Oliver can save his mother’s double then he will also be able to save her. Oliver agrees to do this and stop the evil wizard Shadar. Along the way he meets several allies and friends who will help him out. If Oliver can spread joy to many, he can begin to save lives and souls wherever he goes.

I will say that from the start this does seem a bit suspect though. So as we play through the game you see that if one person is sad then their double in the other world is sad as well. Emotions and everything transfer. If you die in one world then you die in the other. Wait a minute……lets focus on that last part. So if Oliver’s mother died in the real world then she would have died in the other world too so there’s nobody left to save right? Oh nooooooooooo. I mean it’s impossible not to be thinking about that immediately. The question is just if Drippy is intentionally misleading Oliver or if there’s some reason why this would be an exception. Naturally you’ll have to wait until the end to see what is really going on here but I remember thinking about this right from the start. If both souls are linked throughout then that’s bad news for Oliver’s chances.

The gameplay is classic turn based although you are able to move while attacking. In that sense it’s the most similar to .Hack which also had turn based combat but you could move around to gather energy, items, and try to make the other player miss. It’s a good way to add some energy to the usual turn based combat although I tend to enjoy it either way. You can fight as Oliver or you can play as one of up to 3 creatures you control. You can switch in and out at any time though which is really good for strategy. Let me tell you now that you will want to be switching in and out a whole lot here. You can’t stick with any monster for too long anyway since there is a time limit. So I would usually go to my monster for the fighting and would switch back to Oliver when it was time to heal.

You can also capture monsters later on to add them to your team like in Pokemon. For about 80-90% of the game I didn’t use Oliver almost at all aside from healing but then towards the end you learn 2 spells that are extremely powerful. At that point I stopped using the monsters and would play as Oliver exclusively. Trust me when I say that the spells are that good. Use your two allies to draw enemy fire while you charge them up though as the spells take a while to work. Your allies will probably lose a lot though as they have a hard time blocking. You can tell them to go on defense mode by pressing square but they’ll ignore you half the time since they’re already in the middle of a spell.

Don’t worry about them so much but make sure you end up blocking the attack. It reduces the damage by around 90% and also causes the enemy to drop some health/mp bubbles and sometimes even a full recovery that gives you a final smash. You don’t want to miss out on that. There is a lot of strategic elements to keep in mind here but you’ll have all of the mechanics down before long. The game is rather difficult either way though so don’t expect to just breeze on by it. I had to grind out a lot of EXP throughout the game and even then the bosses were challenging. On the final boss I lost on the final phase when the health was in the red the first time which stung. You just have to keep going at the enemies though and get your guys into the mid 50s for level. If you go higher then even better but I wouldn’t really try if your guys are too low. Just hang back and train for a bit longer.

The graphics are really solid here. We have full anime cutscenes, cgi rendered cutscenes, and then classic text boxes with voice acting. The game is very well polished and it’s clear that a lot of budget went into this one. The world looks really good even when you’re not in a cutscene. I definitely had no issues with how the visuals looked at all. This is a winning title. The soundtrack is also good even if it’s not super memorable. It does the job of getting you through the game. I do have a bit of an obscure issue with the sound mixing though. There are 3 styles of cutscenes as I mentioned and each one has a different volume level. The problem with that is that it’s hard to have the volume set up since some cutscenes will be too low one way or too loud the other. It’s a rare issue that has only popped up in a handful of games but it’s worth mentioning. It’s not something that should really hurt your experience at all though, especially considering that all of the cutscenes are subbed.

After completing the game there is a good amount of post game content to challenge. More islands, enemies, missions, quests, etc. Additionally you also have the PS4 trophies to grab and those seem to be reasonably challenging. I expect you will certainly have to take a while to conquer those. Considering that the base game with no sub quests is 30 hours, this game will give you a lot of bang for your buck.

As with most RPGs, the story is also really good. The benefit of a story being long is that you really get to hang out with the characters for a while and get to like them all. Naturally as always I wouldn’t mind if Oliver was older but he does well by the end. His team did well in protecting the universe. It was fun to see everyone with british accents as well since you don’t see that so often. The main heroine Esther is good and always has solid banter with Swaine. Droopy has a lot of confidence and his manner of speaking always makes his sentences memorable.

For the villains, we had Shadar of course who is a tough threat. All of his dialogue is rather intense and the guy is not lacking in confidence. The battles with him are suitably tricky. The White Witch takes a while to actually take the stage but the wait is well worth it. I also liked her design. The game gives out a lot of plot twists before things are over and they all help to really change the experience. Each twist is a rather big deal and none of them felt pointless. While I would have handled the ending a bit differently, you’ll have a satisfying ride from start to finish.

Overall, Ni No Kuni is definitely a great game and I would recommend checking it out. It’s a difficult RPG that will require more grinding than in others but by the same token, the extra level of detail means that this could be the reverse for you. If you really master the mechanics and type advantages then perhaps you could beat this at a much lower level than I. Of course I’d like to see you try though as I would argue I did really well with the mechanics. It does mean that there are countless ways to approach each boss though so feel free to experiment. Always buy the latest equipment and you will be in a good spot here.