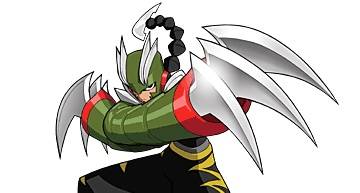 Suggested by Sonic This is a pretty tricky one. On one hand, Cragalanche is incredibly durable so it’s very hard to injure him. On the other hand he’s rather slow and his moves are quite straight forward. Slashman should be able to dodge easily but I wonder how effective his claws would be. Seems to me that they would deal minimal damage so this becomes a battle of attrition. This one could go either way but I’m leaning on Slashman’s experience here. He should be able to cut the rocks to bits even if it ultimately takes a while. He’ll chip away at Cragalanche until he has the battle won. Slashman wins. 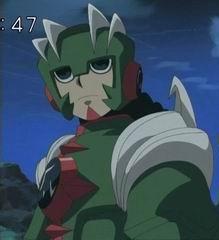 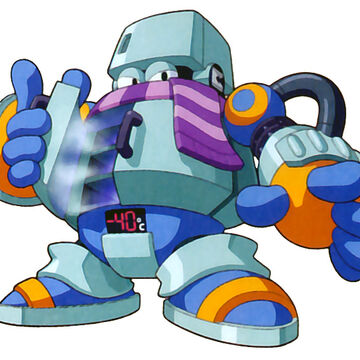 Suggested by Sonic Fridgeman is not one of the more talented fighters out there. He tends to panic quite a bit and I doubt this match would go any differently. Slashnman certainly has a very fierce design so that wouldn’t help the ice navi’s confidence. He would be intimidated almost instantly and that would be it for his chances of victory. You simply can’t win when you’re scared out of your mind and Slashman would completely overwhelm him with speed. Slashman wins.

Ebirah is a Kaiju so that means that he is pretty powerful to a reasonable extent, but that simply won’t be enough to stop Slashman. Slashman is fast and he’s also very deadly. A few good hits should begin to weaken Ebirah since the sea monster’s shell is not hard enough to block Slashman’s blows. Slashman may not have the amount of raw power that Ebirah has, (Although it’s debatable) but his speed will surely win him the day. Slashman wins.

Slashman is pretty fast and a couple of good shots should take down most opponents. Yoshi has some intense egg throwing skills, but in the end that won’t be enough to take down Slashman. Slashman’s got some pretty intense attack power and one good hit should take the opponent down. Slashman wins.

Slashman is pretty tough, but he won’t be able to take Savageman down. Savageman has incredible speed and was even able to overwhelm Megaman. Savageman can also use the power of the dark chips to up his power and his threat level. Slashman has taken a loss in this round, but he may be back. Savageman wins.

Slashman’s final opponent among the sword navi’s. He plans to go out with a bang. Sadly it won’t be the bang he hoped for. Japanman is a legendary samurai who works for Serenade. Slashman is not a samurai from what I know. He’s not even a real swordsman. Japanman wins.

Slashman’s finally met another weak opponent. Plot twist I think Slashman will still lose. Even though Eraseman is also weak he has beaten “undernet” navi’s. I think Eraseman still might have more skills than Slashman. Slashman’s going to have to chalk up another loss. Eraseman wins.

It’s a couple of years too early for Slashman to want to fight Tomahawkman. Tomahawkman has some skills while Slashman has close to none. Slashman is just not a likable character. I just really don’t like him which is why I’m fast blasting through his fights. After a couple more it could be over for him. Tomahawkman wins.

Will Slashman’s sadness ever end. He is now fighting Swordman. He might have had a chance if he had a darkchip. However Slashman doesn’t resort to dark chips from what I’ve seen. This segment in the Megaman marathon is almost over. That’s good news for Slashman Swordman wins.

This is Kendoman’s first fight in a while so let’s give him a warm welcome. And it doesn’t get warmer than this because he’s fighting Slashman who hasn’t beaten anyone to date. Kendoman’s slightly less than mediocre Kendo skills save him here. Kendoman wins.