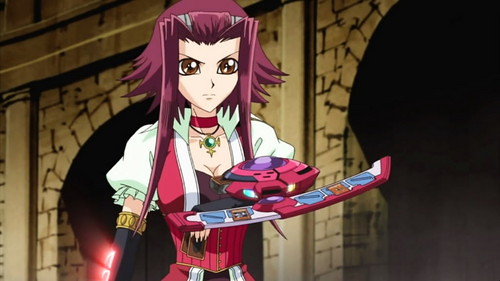 Suggested by IKnowledge Akiza has a good array of monsters on her side. Quite a few of them are very dangerous like her iconic dragon. Joker is a pretty decent fighter as he’s gone hand to hand against Batman at times. That being said, it’s certainly not enough to beat a dragon and Akiza also possessed telekinetic abilities of her own. That’ll make it very difficult for Joker to approach her at all and he’ll really be kept on the defensive. He just doesn’t have any way to approach her and his attacks won’t get through her bodyguards anyway. Akiza wins.

Gutsman is here, but he’s here to lose. Akize has her Dragon and with it she can pwn Gutsman. Even without it their are over 30 ways she can beat Gutsman. Gutsman just couldn’t handle the power of her deck. Akiza wins.

Luna is the weakest signer here and loses in this final signer match. Too bad for Luna, but it’s how the cookie crumbles. Akiza gets this victory and boosts her score a couple of notches. Akiza wins.

This is definitely the closest fight of the arc. They basically have the same cards, just with differant names. This match basically comes to who has the stronger dragon. That would be Akiza’s so…..Akiza wins.

Akiza has plant powers, but they aren’t strong enough to stop Yusei. Yusei could just use his Crimson Barrier to block it. and with his Shooting Star Dragon Akiza’s card are useless. Yusei wins.

Akiza has the legendary dragon, whose name edcapes me. Bakura of course has The Legendary Feared ZORC! Akiza may be an okay duelist but she can’t handle this pro. Bakura wins.