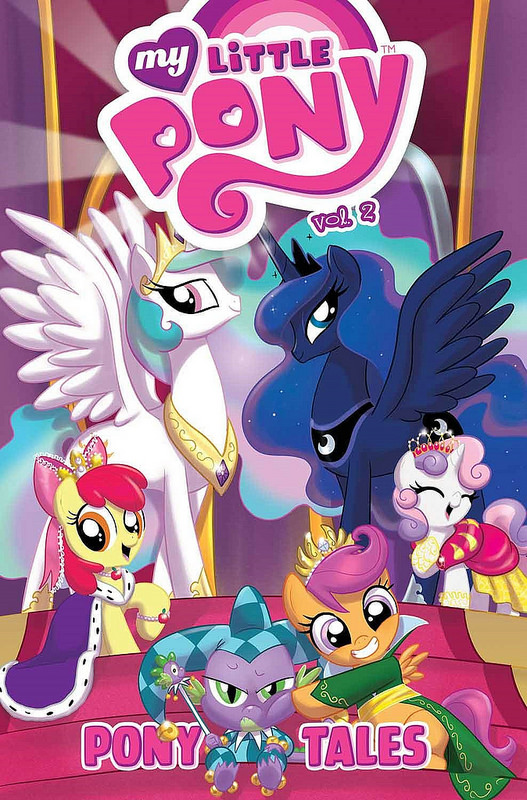 Whenever someone asks if I’m a true My Little Pony fan or just a casual I imagine just showing off my big figure collection to answer the question for me. As I don’t own any figures though, I settle for just calling myself a casual. Well, while that may be the case I can say that this is a pretty solid comic. It’s fairly short compared to most trade paperbacks so you’ll have it done very quickly but it’ll still make for a pretty fun experience. The collection has solid writing and good pacing to back it up as well.

The first story is about the Cutie Mark Crusaders. They have grown bored of Ponyville since nothing ever happens there. They are ready for bigger and better things so they explore the wild and find a rock version of a changeling. It can turn into anything that isn’t alive. The problem is that the Crusaders want it to turn into a bunch of things which keeps tiring it out. If they keep it up at this pace, the poor creature won’t last too much longer. Can they learn to share and care?

Admittedly this story is a little cheesy since you would think that the Cutie Mark Crusaders have already learned this lesson. In fact I am quite positive that they already have so why are they out of character here? It’s a bit of a stretch, but at least they see the error of their ways pretty fast. It’s an enjoyable story that may not be all that memorable, but it’s still pretty solid I would say. It gets the job done.

Then we have the Celestia adventure where she finds out that Ponyville is once again picking on a defenseless pony. One of the oldest teachers in Equestria is being pressured into retiring because the ponies just don’t like her teaching style anymore. They’re all just really inconsiderate ponies who aren’t nearly as grateful as they should be. It’s quite unfortunate but Celestia decides to prove to the town that the teacher used to be really good so they should keep her. The other teachers aren’t thrilled about this, but agree. (Also, they can’t really disagree with the Princess now can they?)

I never really liked the peasants of Ponyville. Luna is always rather harsh on them and now I see that she may have a point. Without strict guidance they quickly become bullies and do their best to keep everyone else down. The teacher may have been a little too oblivious the whole time, but you’d think that they would be a little better at being like the Mane 6. I think Celestia needs to have a word with these ponies. They need to get in line with her teachings.

Next up was Spike’s adventure which is naturally the weakest one. For whatever reason his stories just don’t have the same pop that the others do. He decides to get a pet of his own which turns out to be a multiplying creature which threatens to embarrass him in front of Twilight Sparkle. He decides that he will teach the army how to be good citizens, but can he do it in time?

Naturally teaching a whole race of creatures how to be good in the span of 2 days is difficult, but fortunately these creatures were actually giving it their best shot. They seem like very reasonable little creatures which really helped Spike’s case. None of the ponies really get to do anything here so it’s a little sad that Spike is basically the only main character around. It’s a decent comic, but not the most interesting one.

Finally we end off with the best story of the batch. This one focuses on Luna as she decides to take on Luna’s duties for the day. She is determined to prove that she can handle anything. The problem is that Celestia’s duties are incredibly boring compared to hers. Luna spends her nights chasing off powerful monsters from the kingdom and getting into many spectacular battles. Celestia spends her days insulting everyone and making a lot of signatures. Luna just can’t bare to stay awake for all of this but she must!

Luna has always been one of the best MLP characters with her utter contempt for everyone. While she is a hero, she does a good job of keeping her princess stature as well. I’m always rooting for her in these stories even though she tends to lose every time. It’s pretty unfotunate but I guess the charm of her stories is that one day she will get the kingdom to accept her. I think she did a rather admirable job considering that it was her first time working in the morning. It’s definitely the most entertaining story as well.

The artwork is pretty good here. I don’t think it is quite up to the level of the main series, but it’s close. The characters look right and the action on screen is always clear. You know what is happening so it’s easy to read through the stories very quickly. There’s nothing bad to say here.

In general there isn’t anything bad to say about the comic at all. It’s just a nice batch of stories. You’ll enjoy spending 20 minutes reading through it and getting to see more of Equestria. This isn’t the comic collection you are looking for if you came for the fights, but if you just came to enjoy the interactions then this is the place for you. The pacing is tight and none of the stories are bad. At most, Spike’s was just a little boring, but it’s pretty short so there’s not much time for that feeling to sink in.

Overall, This was a fun volume. The idea of a comic that centers around the side characters is always a risky move, but the MLP series has a very big cast so I suppose that helps this out quite a bit. You’ll miss the Mane 6 for a little while, but you’ll adjust pretty quick. If you haven’t read this comic yet then I recommend checking it out. It’ll remind you of what a good fantasy series should be like.

The Grinch likes to mess with holidays, but when it comes time for an actual fight he isn’t all that skilled. Don’t get me wrong, The Grinch is still stronger than someone like TOAA. However, he can’t hold his own against dragons and the rest of Luna’s powerful deck. She even has spells and traps which can quickly take him down for the count as well. Luna wins.

Luna is the weakest signer here and loses in this final signer match. Too bad for Luna, but it’s how the cookie crumbles. Akiza gets this victory and boosts her score a couple of notches. Akiza wins.

Luna doesn’t really have any good cards. She has Kuribon which is an obvious rip from another card. She has The Ancient Fairy Dragon, which is so ancient it can’t fight. So Luna is doomed in this match. Crow wins.

Luna is not nearly strong enough to take on Jack (5ds). Jack has his Red Dragon Archfiend which would pummel Luna. Luna has her weak fairy dragon, but it won’t be enough to win. Jack (5ds) wins.

This is a tribute to the 5ds ova. Yusei looked like a good character, too bad the tv show wrecked him. Luna has some dueling cards, but not enough to take on Yusei. Yusei is just too powerful and won’t go down easily. Luna may be a better duelist in another series. Yusei wins.