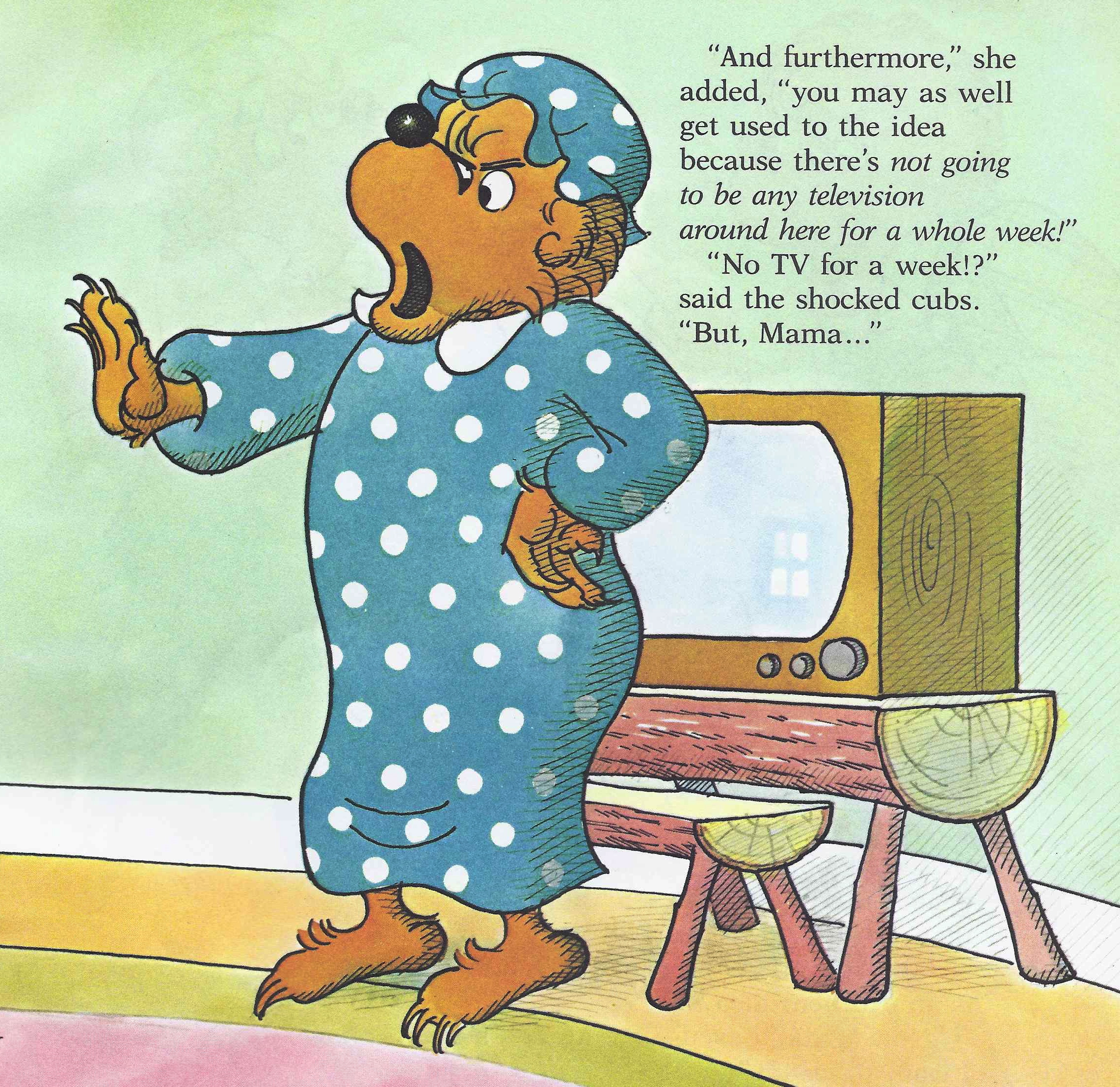 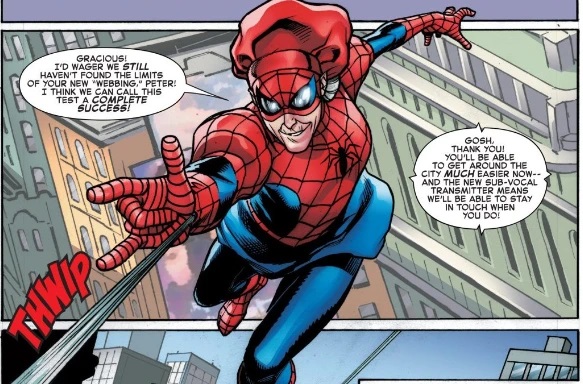 Suggested by Destroyer Aunt May and Mama Bear are both responsible for keeping their households in check. Mama Bear has natural super strength since she is a bear, but it won’t be enough to stop Aunt May. Why? Because Aunt May became Spider Ma’am in one universe and got every bit as strong as Spider-Man. This means she could easily tie up Mama Bear with webbing or she could go in for the win with brute strength. No matter how you slice it this will be a clean win for the Aunt. Aunt May wins. 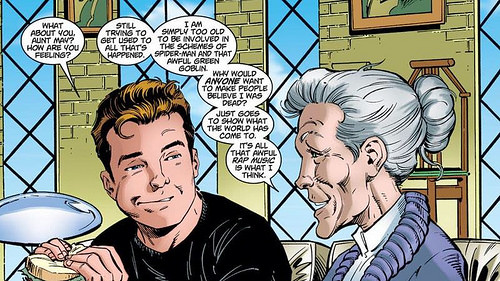 Aunt May has always been the pillar for Spiderman’s strength. As long as May is around Spiderman will fight with all he’s got. She may not be a fighter, but Aunt May will be proud to give Spiderman another win and help him go up the blog rankings. He will be ready to help defend the world from the Infinity War and prove once and for all that he can go toe to toe with any opponent who dares to get in his way! Spiderman wins.

It’s time to look at another Spiderman comic by Slott. No worries, it’s much better than the last volume that I read by him. It’s a tale of Spiderman’s early days as a hero and we learn some new things about his situation. It’s a pretty decent comic and while I had some complaints with Peter and Aunt May’s portrayal, they still looked good on the whole.

All right, the story takes place a little after Spider Man got bit by the spider..or I guess I should say, Parker. Peter Parker still has the adventures that he was in from the old days, but now we have some new ones that happened alongside them. A kid looked up to Parker, but after he was humiliated in a sparring match with Spider Man, he turned to the dark side and became a villain known as Clash. He uses sound to fight, which is a pretty interesting gimmick. Can Spider Man balance his school troubles while holding steady as Spiderman? Only time will tell!

The comic is really a slice of life about Peter during his school days. The writing is pretty good considering that Slott is here and it’s actually pretty enjoyable to see Parker’s adventures. There isn’t a lot of action to be found here, but that’s all right because the comics are still pretty fun to read. As far as early day stories go, it’s constructed pretty well. I dare say that it’s more enjoyable than Batman’s many early stories although it’s still not as good as All Star Superman.

Clash also makes for a pretty decent villain. His sonic powers may not be completely original, but they actually aren’t used all that much so it’s fun to see. It’s also pretty realistic since the kid is just a guy who’s very smart. Giving him real super powers would have been odd and the sonic ones that he creates are technically possible. He has a pretty good life and it can be sad to see him go down into the dark side. He was a genius and he was bound to be rich and famous at that rate. His parents helped him be successful, but they weren’t overbearing about it and actually seemed to be good people. It just goes to show why people think Spiderman is a bad influence on people. Of course, it wasn’t actually his fault as Clash was already getting full of himself, but the kid did want to be like his hero.

Peter Parker’s portrayal is a mixed bag as I hinted earlier. He just seems to be a bit mean at some points like when he humiliated Clash on the roof. He is pretty bitter at how his neighbors kept accepting handouts without giving anything in return, but given the situation it can be a little hard to blame him. He doesn’t actually tell the neighbors about this so he does a good job of holding it in. His school troubles are pretty intense as you may expect, but most of it isn’t his fault. Stealing from the lab was the only point where he really crossed the line. He is a fairly likable character here and you do have to factor in the fact that this takes place during his early days so a few slip ups are to be expected.

Aunt May’s portrayal also gets dicey at one point. She is still very nice to Peter and a good supporting character to have around. However, she looks really bad in any scene that involves Spiderman. The reason why she dislikes the hero is poorly executed and you will just think that she is an unreasonable character. It is hard to believe that she didn’t notice Spideman saving her during the sound attack. Blaming both fighters is never the right call. I still dislike it when the main character gets called out in a film for sticking up to the bully. That’s just not cool.

As for the artwork, it is average level. I wouldn’t say that it is very good, but it certainly isn’t bad. You can say that it is just good enough that you can follow what is happening and enjoy it, but not good enough to make you praise it. The artist appeared to be trying to emulate the style of the 60’s to an extent and that was pretty neat. The visuals look pretty good when Clash is activating his abilities. Sound covers a large area and the art does make sure to depict this. It does make you wonder how Spiderman dodged the blast at times, but I guess that you just have to dodge the center of the blast.

The cast was pretty small, but that left more time for character development. The story was interesting and that gave this volume the edge that it needed to be a good adventure. If the Spiderman comics could always be this good, that would be great. Maybe there is hope for The Amazing Spiderman (Specials and Point 1) comics after all….maybe. Again, it is rather ambitious to keep on adding to Spiderman’s origins and I doubt that it is easy on the continuity, but it can be pretty hilarious to look at the new twists. Remember Silk or Iron Man’s alien twist? Hopefully not…

The twist about there being other “nerds” (Don’t care for the term, but all of the characters use it so it may as well be their title) was intriguing since Parker apparently never noticed them during his school days. The poor hero had to just eat by himself for a long time. He falls out with those guys pretty quickly so they’re still a nonfactor, but at least he got to make some friends for a brief period of time. I didn’t care for any of those characters, but they tried their best to be likable. If Parker hadn’t stole that lab equipment…things could have been different. I think Spidey could have come out on top without stealing the tech, but I suppose that it is merely a hypothetical case.

Overall, This volume of Spider Man really wasn’t bad. This volume is pretty short (Yes, most trades for ongoing series are short, but this one really feels shorter than usual.) so you’ll be done with it very quickly. The pacing helps the story to move quickly and the short size is likely a good thing, but it’s worth noting if you’re planning on buying this one. Parker and Aunt May may have been a little off, but I wasn’t expecting their portrayals to be perfect anyway. It’s a pretty fun adventure through and through so it definitely deserves a positive rating this time. I recommend checking this out if you want to relive the original Spiderman days. Before the world of guest stars and whatnot so it’s a pure Spiderman story. It’s certainly not the most action packed comic out there, but it’s entertaining and that’s what counts. This could end up being one of the best superhero origin day volumes in quite a while so that’s pretty cool for our Friendly Neighborhood Spiderman! (We finally learn how he got that title as well)

Aunt May is back and now she’s up against Agent Bob. This match is a little tricky since Aunt May was once bitten by a radioactive spider and gained superpowers. Unfortunately, she didn’t get to show a lot of her abilities and for now I’d give Agent Bob the edge. He’s pretty decent with a gun and while he’s not very brave, he can fight if necessary. Agent Bob wins.

Aunt May may be a strong character, but she lacks the netnavi that Ann Zap has. Netnavies make all the difference in this sort of fight and that’s why Ann Zap takes home the win. Aunt May takes a loss and drops down the blog rankings. One day maybe she’ll be back. Ann Zap wins.

Aunt May has been helping heroes for years in subtle ways. Of course she is still old and will not be able to keep up with Feitan. Feitan has a sword and could take down Aunt May in one blow. Aunt May drops down to 0-1, but she may be back someday. Feitan wins.