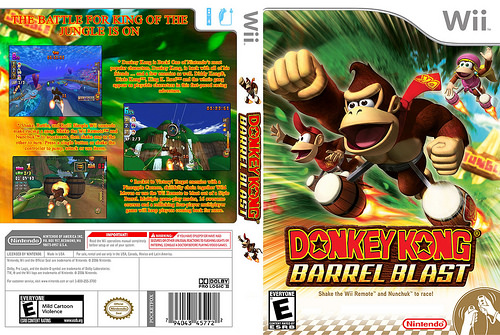 It’s time to look at Nintendo’s biggest mistake when it comes to the racing genre. A DK racer practically writes itself and just has a ton of potential. It’s a shame that the game squandered this so readily. Motion controls are what hold this game back and while it was an attempt by Nintendo it completely backfired. Sometimes just because an idea makes sense in concept doesn’t mean that it should be implemented. This is most certainly one of those times.

There is no story mode of course but we do have a few different tournaments at the ready. There are 4 main tournaments and 2 bonus ones. The bonus tournaments allow you to pick your own stages to have a tournament with friends and another one allows you to randomize the stages. Both are handy when playing with friends but you don’t get a trophy for clearing them so there is no single player incentive. The main tournaments start out at 3 races and eventually go to 5. There are multiple difficulty levels but you are forced to start with Rookie so I just stayed at that level. Even then the game is surprisingly difficult. You have to stay at top speed and use a lot of boosts if you want to come out on top here. Of course, the Mario Party luck factor is around here so sometimes you’ll just get blasted by other racers behind you which is out of your control. Not much can be done about that.

Each racer is using a pair of drums instead of a car. It is for this reason that instead of accelerating like normal you must beat the drums to keep going fast. You have to make the motion of hitting the drums constantly to stay at peak levels and just hit one drum to turn. Hit both at the same time to jump and hold down on the Nunchuk to activate your boost. Your boost is the most important skill that you have here. It can change a whole race and just know that you can extend your boost by hitting enemies or normal barrels. If you time the boost right you can keep it going for a very long time. Just focus on the combo and don’t use your boost unless you see something to bump into.

There are a lot of games that can be called painful while you are playing them, but there aren’t many which you can say that in a literal sense. Your wrists will be absolutely exhausted after playing this game and I am convinced that it wouldn’t be healthy if you played this game long term. You can even expect some neck and back pain if you were straining a lot and too rigid while playing. Naturally the trick is to simply not play too hard but that’s easy to say until one of the computers passes you. Then it’s back to hitting the drums as quickly as you can.

When it comes to the graphics then this game finally gets to shine. The character models are definitely on point and are appropriately high quality. The levels all look great and there is a lot of variety to be found here. Whether it be Jungles, Volcanoes, or even Space DK has you covered. The final level in the game is the hype space one and it is as cool as you may expect. I was pleasantly surprised at how much effort Nintendo put into some parts of this game, but maybe I shouldn’t be. In theory this was supposed to be their next big racer. The stage themes are pretty solid as well even if they aren’t all that memorable. I suppose you can’t have every game be quite as legendary as Mario right?

Aside from the tournaments which won’t keep you busy for very long, the game has other modes at its disposal as well. One of those is the challenge mode where you attack various missions and see if you can accomplish them. The missions are actually reasonably difficult as you can easily lose a stage if you’re not entirely sure how to approach it. Take one wrong shortcut and it’s time to retry. Between the various unlockables and the main tournaments, I think you’ll find that the game has a reasonable amount of content to back the pricing.

All of this is only if you can get past the gameplay though. None of the other stuff will ultimately matter if you wrists simply can’t take the pressure. The items are fun though and if you use them right they will help you take a break. Build up some good boosts and just use it when you know that you’ll be able to keep it going for a while. During this time you don’t need to beat the drums. You have other items like armor and missiles but you have to keep shaking the controllers during this. Interestingly enough, the descriptions in the game say that you can stop shaking once you’re at max speed, but they must have meant that you could stop shaking for a moment because after that the car will immediately start slowing down again. So much for that I suppose.

Overall, Barrel Blast really could have been a good game. It had a lot of the right pieces in place like the animation, soundtrack, and array of content to keep you busy. The one area where it went wrong was with the controls and you’d think that this wouldn’t be a big deal. It’s just so drastic that it ends up bringing the whole game down with it and that’s the unfortunate part. You actually feel like the game isn’t healthy to play. If you want some exercise for your wrist and don’t think that it will end up having a detrimental effect instead, then I suppose you may want to give this game a chance. However, if you’re playing this game in the first place because you want to relax while cruising through the levels then this isn’t the right game to add to your collection. There is nothing relaxing about constantly beating the drums.