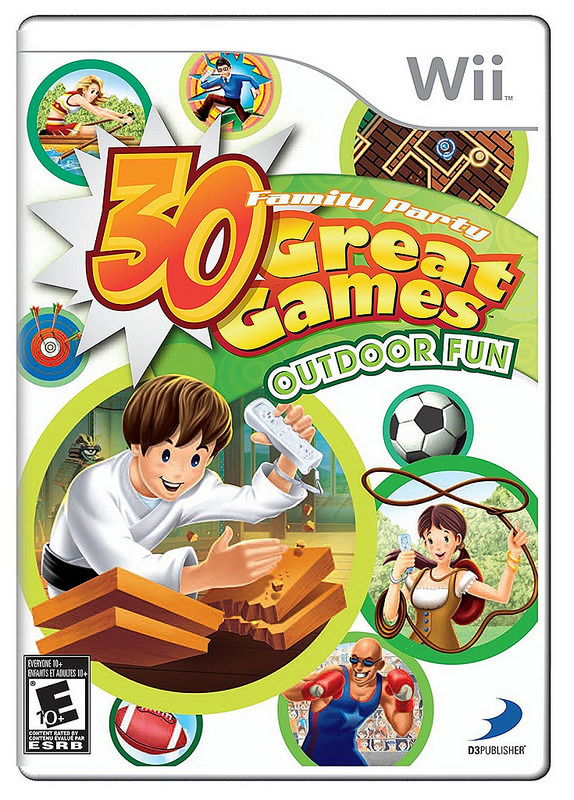 It’s been a while, but it looks like it’s time to try out another Wii party game. I really went on a rampage buying a ton of these a while back, but they’re finally almost at an end. I have to admit that I’m going to miss these Wii games ever so slightly, but at the same time it will be fun to have them all gone for good. This one is certainly of a higher quality than some of the others like Deca Sports and the 30 games are actually mostly unique. I have to give the game some credit there and the A.I. is tough although not always very balanced.

See, some games are very easy because the A.I. can’t play for beans and then they’re overpowered in others. It’s always hard to know one way or the other at first if you’re going to be in for a really close fight or if you won’t even have to try that hard. It is good that it’s not a cake walk though and you should be able to win pretty much all of the games by the end. Some of them just take 2 tries tor eally understand how to play since the controls and instructions aren’t always clear. They’re certainly not quite as on point as the Mario Party controls, but few games are.

The main campaign mode divides the 30 mini games into groups of 5. You start with only 4 unlocked for the first three worlds so you have to beat them to unlock the 5th minigame for each world. Beat all of them again to unlock the 4th world. There are 6 worlds and since you have to beat them all twice, it’s about 12 worlds of content. Of course, it can be a little tedious to have to win twice each time and if your score isn’t high enough, then your win isn’t even counted. Luckily that only happened to be once. It would be a bigger issue if it was something that happened more often for sure. I wouldn’t call this a very long game, but considering that you can get it for 3-4 dollars from Gamestop, it’s not a bad deal.

As I mentioned, this game has a decent level of quality to it so the games don’t start to copy each other with different colors like certain other sport games. There is really a nice variety here. I won’t mention all of the 30 games here, but I figure that it may be nice to list some of the good ones. This game has a Football minigame where you have to try and gain yards/score. The other three players try to stop you. It seems a little hard to do anything when the deck is stacked against you like that, but it is certainly fun. Another solid game has you control a spaceship and you have to blast your way to the finish. The side-scroller is handled well and it could easily be a real level in a game like that. It was certainly handled well. Track and Field/Marathon was fun as it tests your reflexes. There’s a memory game where you have to remember 10 really quick objects that pass through the screen and the tough part is that all 4 of you get turns at it. UFO is another similar one as you have to beam up people who have a certain description ahead of the other 3.

There are some other active competition type games like a platformer where you have to jump to the finish line. That one’s pretty fun and what adds to the tension is that you can push an opponent into the water. Another game has you hold on to the ground for dear life as it shakes, but an opponent might shove you away while you’re bracing yourself. Honestly, I’d say that at least half of the mini games, if not more than that are actually quite good. It was surprising to see. I don’t want to get crazy, but from a pure minigame perspective, I dare say that these may be better than Mario & Sonic, at least the first game. Naturally, this game lacks other things like the presentation and AAA value that the other title has, but when it comes to the pure mini games, it’s hard to get better than Family Party.

For replay value, you can try to beat your high scores or get more medals. It’s certainly not the most thrilling form of replay value, but it’s something and naturally there is also multiplayer that you can give a whirl. There’s certainly enough content for your dollar here so I don’t think that should be an issue for you. The graphics are all right. I am glad that the characters all got actual design and aren’t just the same kid with a different T shirt each time. Yes, I noticed that even if the game tried to hide the fact. The mini games all look pretty good and everything is on point. It’s not breathtaking or at the level of a AAA game, but it’s good enough. The music is also pretty fine. I like the main menu theme and the music that plays throughout is fairly calming. There’s nothing really wrong with it and I’ll take it over nothing. It’s probably free domain music.

Overall, This game was maybe a little better than I expected. The fact that the developers actually put some thought into this game definitely gets a thumbs up from me. I’m sure it was still reasonably cheap to make, but at least the games were actually fun. I definitely have to give them some well deserved praise there and this game got quite a few sequels and spinoffs/prequels so those may warrant a look as well. Realistically, I don’t see myself getting any of the other games in this series anytime soon, but you never know. You never want to count out anything since you just don’t know what the future will have in store. I’d recommend this game if you’re looking for a party title to check out, but for that you may as well get one of the Mario and Sonic Olympic titles right? That, or you could get Mario Party 4, the definitive party experience. (Yes, I’m not counting Super Smash Bros here!)