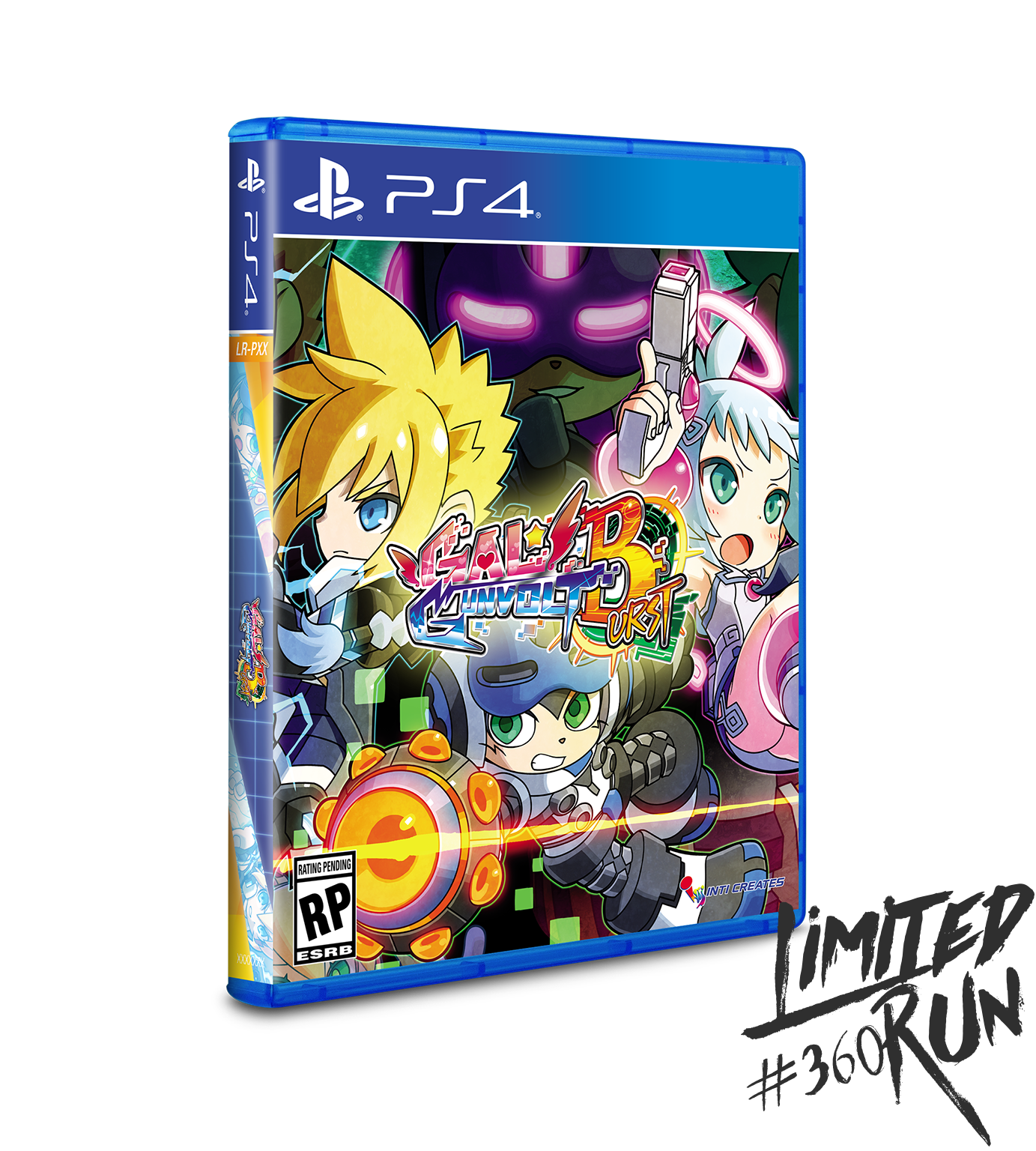 Gal Gunvolt Burst is a game that I didn’t even know existed as of a few days ago. Who would have guessed that Mighty No 9 would have had a crossover of any kind. Well, it’s definitely nice to see Beck back alongside the Gunvolt character. I’m not familiar with the series Gal is from but the more crossover characters the better right? It’s a really solid platformer that rewards exploration and customization. If you get the right loadout set up then you should be able to dominate any level with ease. I tried going through the whole game without much customization but let me tell you, it makes a huge difference.

The game starts off with Gunvolt being warped into a rather strange world. In this world he is unable to use his normal powers. Before he can make head or tails of what is going on, he is approached by a robot who claims to be Beck but longtime Mighty No 9 fans will know that the color scheme doesn’t match. He says that Gunvolt will have to defeat 8 Robot Masters in order to find out the truth about the world. Gunvolt isn’t sure what is going on here but he is certainly ready to unleash some combat and take everyone down a few pegs. They don’t have him known as one of the strongest fighters out there for nothing after all.

The story is very to the point. I imagine that in the other stories we would see something similar here. The structure of the game follows the classic Mega Man template where you have to defeat the 8 robot masters in front of you. After that you enter the final levels where you have to defeat them all again and then take on the final boss. Each level isn’t particularly long but you should really take the time to explore a bit on the way to grab some power ups. The power up function is very handy here.

In terms of gameplay you’re running through the levels and blasting all of the enemies in your way. However, there is a bit of a wrinkle to the normal formula here. You are given a customization menu you can access at any point. Here you can choose to do things such as make your bullets bigger, improve your speed, add double jumps, etc. You have to fit it all within your system specs though. So initially you won’t be able to do much of anything and then by the end of the game you can turn on almost everything. When you beat a level you are given the option to choose one of 3 rewards. These include more space, a poster for your collection, and an elemental power. Initially I picked space for each level I beat.

That ended up costing me a bit because element attacks are really what you want here. Like in any classic Mega Man title the element guns help you deal extra damage to your opponents. It makes a huge difference in a fight. Without those element guns I wasn’t able to beat almost any boss without a lot of fruit. Fortunately every level would give you opportunities to grab a ton of fruit. However, this caught up to me in the climax level where you have to beat all 8 robots again. That was a little much for me to deal with. I got wrecked a lot so I had to go back and beat every level a second time. Additionally I went out of my way to get a bunch of other power ups. The best customization option was the triple attack. It takes up a huge amount of space (5000. For reference my final space limit was 7000) but it’s well worth it. It’s hard to describe just how good triple attack is. With that I was beating most bosses in seconds.

So the moral here is that customization is huge. It’s handled really well and the reason why I like it is because it does cause you to explore but you really feel the benefits of doing so. I’ve always said that if you’re going to be a game with a lot of backtracking then it’s important that you feel the improvements. It is undoubtedly true that you are way stronger with these upgrades so that was satisfying. The Gunvolt levels were also a lot of fun because they faithfully recreated all of the Mighty No 9 levels to go with the bosses. It’s all pretty nostalgic this way and seeing Beck again was definitely a lot of fun.

The graphics are on point as well as the soundtrack. This has that nice Mega Man feel to it both with designs and music but throwing a modern touch on it. This is an example of a game modernizing a lot of elements without losing sight of what made it so much fun in the first place. The game is a little short on each playthrough. I’d say it’s probably around 2-3 hours. There’s a trophy for beating the game in an hour though and I can see how that’s possible. There are 8 main levels which range from 3-5 minutes and then the final 4 levels. As long as you beat them without dying too often and properly use your customizations then you’ll be set but that’s not something you are likely going to be able to do the first time around. Obtaining the platinum trophy would likely be difficult here.

One trophy says to beat the whole game with your default loadout. I can already see how that would be quite troublesome indeed. You would need to really master the boss attack patterns. It does add to the replay value though as well as beating the game with the main 3 characters. The physical version of the game also brings a lot of bonus characters that you can play as too. So you have a lot of options here to be sure. I know the main 3 have very different gameplay styles so I wonder if that’s true for these other characters as well or if they are echos this time around.

Overall, This is a fun crossover. It’s a very retro styled game with a nice little plot where we get to see the heroes meet up. It’s fairly quick but all of the levels are fun so you’ll have a good experience here. If you like side scrollers or shooting games in general then this is a good one to check out. Additionally the customization aspect is just handled really well so it’s fun to experiment with different loadouts. I’m definitely ready to get some more crossovers like this in the future.