No such luck folks. There were no stats to be found here. 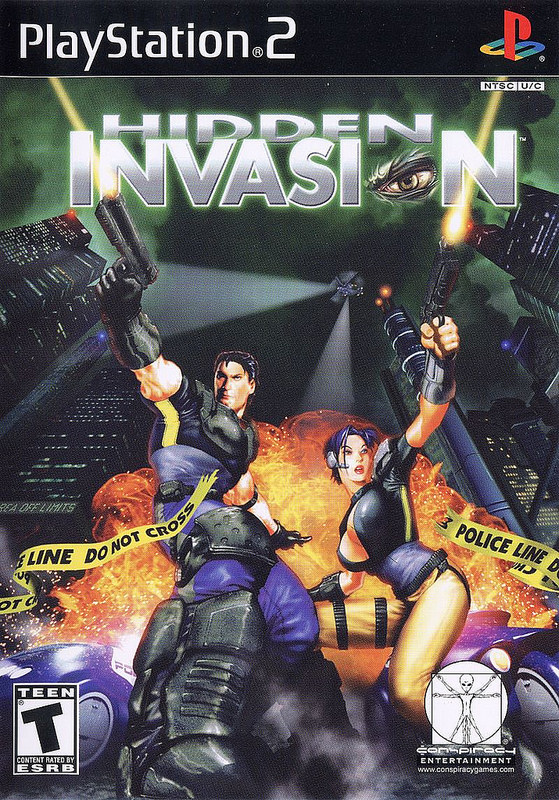 It’s time to look at a relatively old game. I believe that I got this one for Christmas last year. If so, then it’s been almost a full year but at least it is finally complete. The game is actually very short, but it was a fun experience. If the camera work had been better, then it would really have been a great game. It’s solid, but don’t spend too much on it.

You have the option of choosing the guy or the girl. I chose the guy on my play through and it starts with you fighting off some terrorists. After you gun most of them down, one of them lets you know that they are actually Freedom Fighters and they are fighting to save Earth from Insectoids. The main character doesn’t show much remorse for destroying the guy’s allies, but does quickly help fight off the aliens. Can the hero take down the Alien Queen to save the planet or will he falter? Moreover, how does this change the fact that the “Freedom Fighters” were going around messing up the city and presumably destroying a bunch of civilians? Granted, many of them may have been shape shifting aliens, but all of them? Looks like we will be getting a deeper look at good and evil than we thought!

Hidden Invasion plays out like your classic 3D shooter. You can instantly tell that it is a PS2 game based on how the graphics look. There’s something about the PS2 that was simply very distinct. The game looks like Oni or Eve of Extinction. I’ll get back to the gameplay in a moment, but I thought that the graphics were fairly good. It’s not all that detailed of course and the actual character models can be a little blocky, but it has a fun nostalgic look to it. At the very least, I can say that it was visually interesting from start to finish. It won’t win any awards, but it can hold its own.

As for the gameplay, it feels a lot like an arcade game. You can punch, kick, grab, shoot, or use your special attack. Your special attack takes some of your health away, but it causes a shockwave that deals a lot of damage to all enemies around you. It’s well worth the health when you are surrounded by aliens and low on ammo. Guns are your friends here as you are virtually defenseless without them. You can use the guns to mow down armies of aliens at a time. When you are down to hand to hand combat, you can only really deal with 2 enemies at a time. Any more and they will quickly start to overwhelm you. Strategically using grab and block will help a bit with this though.

Each level has a timer that will range from around 5 minutes to 10 minutes. You have to get to the goal or find some things before that time expires. I never had the time run out on me as it is quite generous. That’s considering the fact that my TV has a tough time with the darker levels so it should be even easier for whoever is reading this. You won’t have a problem. Each chapter has a few mini levels and there are 7 chapters in the game. You can probably complete the whole thing in around 3-4 hours, possibly less if you really know what you’re doing.

One thing that helps to make the game very manageable when it comes to difficulty is the fact that you instantly re spawn where you died as long as you have more lives and you start with a free super attack. Maybe a boss will beat you once or twice, but 4 times? You’d really have to be missing all of your shots and punches for that to happen. The key to every boss fight is to completely ignore the minions. They are endless so it is pointless to waste your bullets and energy on them. Just keep on punching the bosses and you’ll be okay.

The final boss is the only exception. You still ignore the minions, but you can’t punch or shoot your way out of this one. The only way to beat her is to throw grenades. The funny thing about this is that it is literally the same final boss as the Anubis game that I recently played. The only difference is that the controls are actually good this time around. She can KO you in one shot with her fire breath which I find a little cheesy, but your grenades have a long range so you technically never have to get near her. Play the long game and you’ll be fine.

I mentioned the camera angles before and trust me, they are as bad as you can imagine. You can’t alter the camera at will so you just have to roll with the turns whenever you make a turn. It can make it a little difficult to aim properly with the gun so just shoot wildly and hope that you hit something. It’s not quite as bad as Batman Dark Tomorrow, but it can get a little grating at times. It forces you to fight a little more than you’d like. My only other gripe is that fact though. The minions are infinite on all levels and if they are around, you have to beat them before pressing on. This means that you have to fun very quickly once you beat a group since you will have about 10-15 seconds before the next wave shows up. If you get lost at all and have to circle back, prepare for a lot of fights.

There’s not much of a soundtrack to be found here. You’ll likely forget all of the tunes as soon as you turn the game off. Not to worry, what it lacks in audio, Hidden Invasion makes up for in cutscenes. The story was fun to follow and this is due in part to the fact that actual cutscenes were used. While PS2 is certainly capable of having cutscenes as many games have shown, I don’t always expect them so it was fun to see.

Unfortunately, there is not a lot of replay value to be found here. Once you have completed the game, the only thing you can do is beat it again. There is no post game content to keep you hooked and I think that’s a bit of a missed opportunity if you ask me. It’s still good for the initial play through of course, but this helps to keep it from being known as a great game.

Overall, Hidden Invasion is a fun stand alone game. It does a good job of depicting just how serious the alien invasion is and the gameplay was a lot of fun. It’s the kind of Arcade Game that’s easy to plug and play. The controls aren’t quite as simple as some other Arcade titles so you’ll still want to look at the booklet at least once, but it is smooth sailing from there. When the aliens start rushing at you, you’ll want to take your blaster out and exterminate them all. It makes you feel like you’re in a real alien movie. The Alien Queen had a cool design as well and made for a good end boss. If you haven’t bought the game, then I recommend taking the plunge. It’s the only way to know whether or not you are cut out to be an alien hunter!