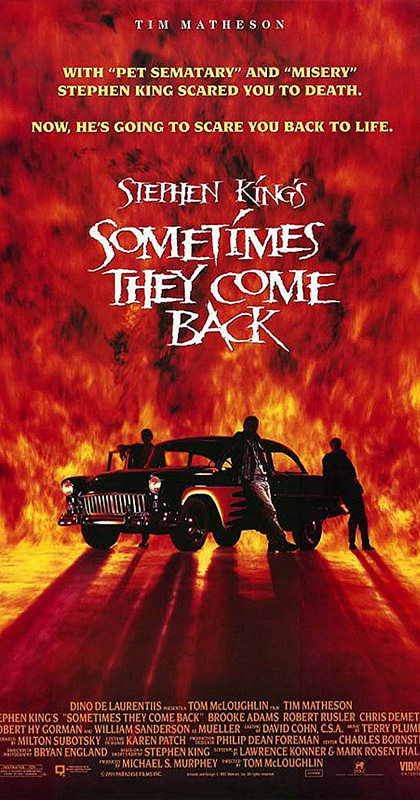 When you see a film from Stephen King you typically get the feeling that it’s not going to be good. The guy loves making his books as gritty and over the top as possible. Not saying that he can’t have a good book, but I get the feeling that the vast majority are pretty bad. This one definitely continues that streak and is just so dark and gruesome that you’ll want to take out a few hot pockets to make it through this film. Sometimes the Razzie nominations come back, but sometimes they don’t.

The film starts with Jim moving back to the town that almost ended his life many years ago when bullies destroyed his brother. He swore that he would never come back, but the cash lured him in. That’s how it always starts. You’ve got a nice life situation, decent pay and a good atmosphere. Then someone offers you extra money to do something dangerous and you take it…not knowing that it will be the end. Jim took this risk and as a result his family is now in danger. The teens who attacked those 20+ years ago and got hit by a train are now coming back to life. They are murdering kids in Jim’s class (Jim’s a teacher) and taking their place. Nobody can stop these guys since they have regeneration and super strength. Gradually they all come back and Jim is forced to have one last confrontation with them. Can he prove that he has grown stronger over the years or will he have to beg them for some help?

Well, where to start here? I guess lets talk about tired horror trope #78: Overpowered villains. As always the main characters can’t really do anything against these villains. They are stronger than humans and bullet proof. What can Jim reasonably do about all of this? He does try to defend himself at times but they just beat him with a single punch and call it a day. He’s just plain stumped at that point and it’s hard to even point the blame at him. Of course the moral is that he has to move on, but whether he does that or not students are going to keep on dying. It’s a lose-lose situation and the worst part is that the students had nothing to do with this, but are still defenseless. Jim is unable to prevent any of them from dying and even by the end of the film nobody will ever really know what went on there. Jim even drags one guy out of retirement only to let him be promptly murdered. None of these deaths are painless or peaceful at all either. The villains make sure that these guys really have it.

Then we also have the fact that Jim’s guilty conscience shouldn’t even be guilty. Basically, he stole the car keys from the bullies so after they murdered his brother he ensured that they would die as well. So..was he not supposed to have picked up the keys? The bullies made it clear that they were going to destroy Jim next. It’s also not as if it was pre-meditated, Jim just grabbed them in the heat of the moment. The whole thing makes you shake your head. Then, while the bullies got super powers and such the brother doesn’t get anything so when he comes back from the dead he promptly gets beat up again. Shouldn’t he have also been powered up to be able to match the others? Something just doesn’t seem right about all of this. The villains always get the props with this.

So, the film is super violent with literal dismemberments and overly dark/tragic. What else could go wrong? Well, that is about it. The rest of the movie just doesn’t help its case with its poor script and unlikable characters. The film can feel rather long at times and there isn’t much to like. That’s always the worst part for a film like this, there are no positives to be found. Without those then the film really has no hope of being good. No worries though, the film does squeeze in the annoying kid trope. So, the mother and the kid know that these teens are trying to destroy Jim. They naturally lock the doors. Then someone knocks on the front door so the kid runs up and opens the door. The Mom should have stopped him for starters and for seconds there should have been some common sense here. Why is this kid so terrible? It’s why I don’t like having kids in films. They make the worst possible mistakes constantly. The only consistent thing about them is that they will never make the right move. Leave fighting zombies to the professionals.

Overall, This is definitely not a film that I would recommend. It plays out like just about any other slasher with the zombie bullies just destroying everyone in their way. Jim can’t stop them and only a demonic train is able to help him out here. It ends up effectively being a time loop only in this version extra people die in order to power up the loop further. Definitely not something you want to see in such a loop. There’s nothing particularly charming or fun about this film to hold it together. We also get a ton of flashbacks so if you start to forget how the brother died, no worries you’ll see it a bunch. If you have to watch a horror/thriller about changing the past then watch Flashpoint instead. Still not a great movie, but it is an improvement.