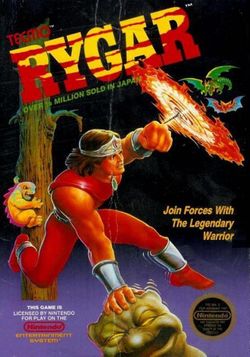 It’s time for the newest addition to the NES Online selection. Rygar had an interesting look to it. You don’t really play a lot of games where the main character uses a weapon like this. It’s sort of like a spiked shield. You do get other weapons as the game goes on though. This title had a lot of potential but does falter early on. As with some old games the main issue here was the lack of a map and how you had to solve puzzles to get through. That’s a bad combo because solving puzzles is difficult enough so throw in the fact that you’ll be lost and it gets even trickier.

This is one of those games where there isn’t much of a plot unless you check the booklet. You are thrown into the action and must now try to complete each level. Each level has a ton of enemies chasing after you so you have to beat them back and keep it moving. It’ll be tough but your attacks move very quickly so as long as your reaction times are on point you should be fine. Additionally you can jump on all of the enemies as well which helps a lot since that’ll stun them for a little while. I highly recommend jumping if the enemy numbers start to get a little too crazy.

What ended up stumping me is that I eventually reached a point where the mystical statue told me that I could not get any farther without some new weapons. The problem is that I could not find any new weapons. I back tracked my steps and ran all around but no dice. Without a map this ended up being a pretty futile mission. The game wasn’t quite big enough where I was about to check online and see where I should go. I searched for a long time and after I found no results I called it a day. It definitely was not the most impressive way for things to start on my end.

It’s a shame because the actual platforming is pretty fun. It’s very smooth both in how fast you move as well as in how strong your attacks are. It’s a pretty good blend. I could see myself really enjoying the bosses that would appear. It’s almost like a beat em up to the extent of how well you can fight while keeping in the platforming elements. I don’t understand why so many games want to throw in some puzzles anyway. This game just didn’t need them and would have been better off without these weapon limits.

The graphics are pretty solid. Everything looks to be on point which is certainly good. I like the enemy designs as well as the weapon. It’s all very clear and I didn’t notice any lag either. The music is okay from what I recall. The length is pretty hard to say but it’s likely around an hour or longer depending on how often you get lost. I believe that will end up impacting the replay value of this game but ultimately it will last you for a little while which is definitely a good thing.

Overall, Rygar has solid gameplay. It’s really some of the smoothest that I’ve seen on the NES. That said, it’s ultimately hindered by needing to switch weapons at certain points and not knowing where to switch the weapon. That really did the game a disservice. If you like that sort of thing then I’d recommend checking this game out. Otherwise this is a title that you should skip. Other games are on the NES that are just better platformers. In fact, one game coming up is a good example of that. When you just focus on platforming and ignore the gimmicks and extra stuff then you can ultimately end up having a terrific game on your hands.