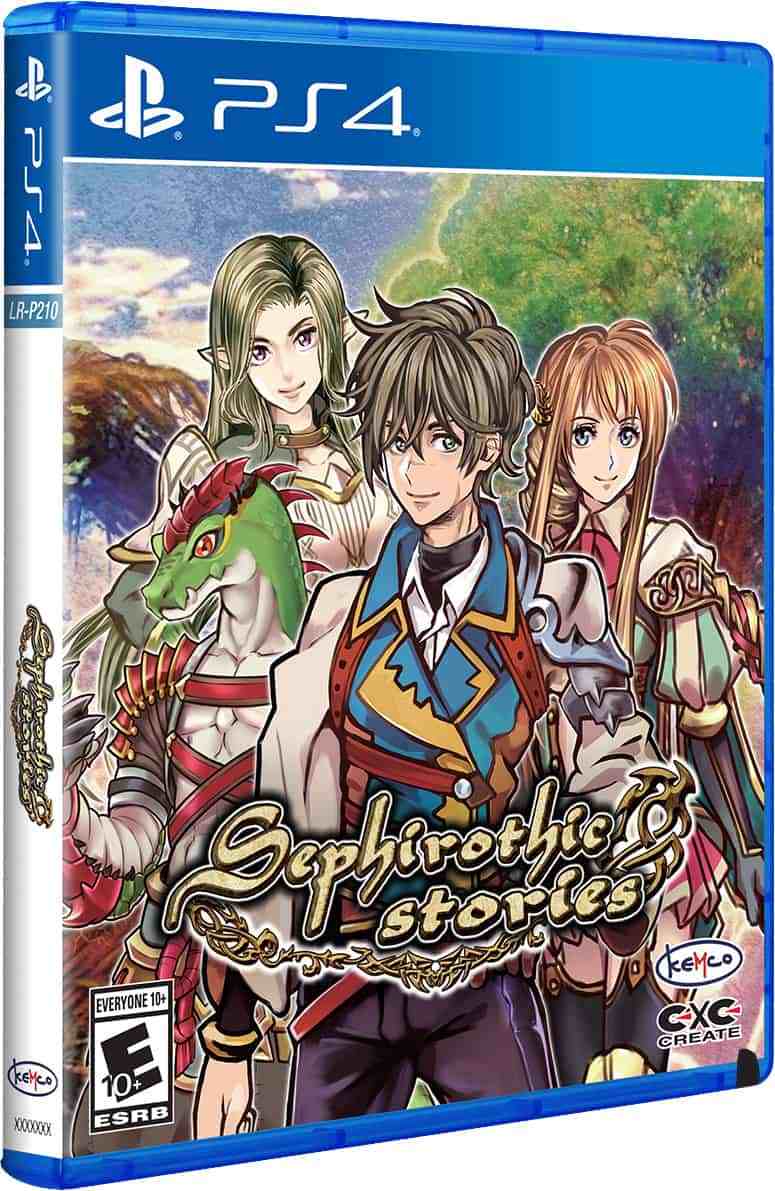 It’s time to look at a recent RPG for the PS4. These guys made the Asdivine Games and it really shows in some areas. The music and menus are grabbed straight from those titles. The original Asdivine was a masterpiece. The sequel may not have been as good but it was still a solid RPG. That’s where this game lies as well. It’s a pretty solid game but what holds it back is really the length as opposed to the characters holding the other one back. You’ll have this game completed in under 5 hours which is pretty unheard for an RPG. I have a theory on this but more on that in a bit. Either way if you like RPGs you should enjoy this one as it’s very smooth.

The game begins by explaining the story which is a bit out there so bear with me. Sephiroth is a giant tree that powers 3 planets. It drops fruits which then snatch up some vessels which allow them to become human. They will eventually be poisoned by the murk that appears on the planet. At that point they have to either find a new vessel or get erased. Sephiroth himself has to keep being replaced as the old one dies. It’s basically a cycle of death and rebirth that happens all the time. So the game follows a fruit named Harold and his best friend the lizard monster Izzy who try to find some apples for Harold’s sister. She is quite ill and won’t last very long. The village’s heroes are sent out to find the cure for her but only one of them returns. It would seem that they were ambushed by monsters.

Harold is afraid of monsters but he agrees to help them out. He was born with the ability to sense monsters which should help in avoiding them. That’s the idea at least. After obtaining the cure, the Grandma informs them that things aren’t right with the world. Harold needs to find the lost hero quick and also see why the planet is falling into ruin. Monsters are even gaining intelligence which shouldn’t be possible. Harold will get to the bottom of this one way or the other but is it already too late for the planet? Things get pretty cosmic towards the end.

One thing you may be wondering from the start is, was using the name “Sephiroth” a coincidence? I personally doubt it since there are too many similarities to the Materia and the whole lifestream of the planet stuff from the original game. Still, it’s a good way to get people interested. The idea of Sephiroth becoming a tree is pretty interesting but there’s more to it than that. Despite the short length there are a ton of plot twists so I won’t talk about the story much. Needless to say, there is quite a lot to tackle here and nothing is quite as it appears to be.

The gameplay is a turn based combat system although it uses speed as a factor so it’s more like Mega Man X Command Mission than Pokemon. You can attack when it’s your turn but the villains can use abilities to slow that down. You then have your normal attacks or skills to use. Interestingly general magic and physical skills are both merged into the same icon for this game. You’ve also got Fusion which is a combined attack you can use later on in the game. It deals a ton of damage so save it for bosses since it can pretty much 1 hit KO just about all of them. Don’t even think about wasting it on a minion.

The graphics are pretty nice. I miss the sprite style but the 3D models look good. At most it can just be a bit clunky as characters start to walk around aimlessly during cutscenes or open their mouths for a bit before talking happens. Seems to me like some opening hiccups with the style but I’m sure they’ll have it down before long. The soundtrack is excellent though. It’s very nostalgic hearing the classic Asdivine Heart themes in there as those never get old. They’re all so fast that it really builds up your excitement for the whole thing. Then we’ve also got the quality menus that those games had. Just about everything is customizable which is fantastic.

One thing against the game though is it looks like it wasn’t tested/balanced very well. You’re simply given too many options in the game which makes it a piece of cake. For example, you start the game with a ton of premium coins so you’re able to buy one weapon of your choice. I bought the Sephiroth Sword which made Harold the ultimate glass cannon. He could take down any non boss throughout the whole game in one hit. Even bosses didn’t last much longer than that. You won’t have enough premium coins to buy anything else for the rest of the game but you don’t need too anyway. Then there are plants which you raise to enhance all of your stats and weapons you can keep on merging. Really, what this boils down to is that it makes it very easy for you to blast through the game. Part of why it was so short is you could take down bosses in a matter of seconds. I love the speed but I think they probably could have given you less options.

It does make you feel in total control though which is always good. As for the characters, they’re not bad. Harold isn’t my favorite lead since he’s so scared of things though. I prefer my main characters to be a bit more confident and just blast aside anyone foolish enough to stand in their way. Harold’s a lot more timid than that despite everyone saying how awesome he is. Clarice is the main heroine and she’s decent. Not quite as strong as most but she talks tough. She always makes sure Harold doesn’t get the wrong idea about things. Izzy’s a pal though. He’s always here to encourage Harold and make sure that he stays on the right track. The main cast may not be the most interesting but none of them are bad which is always important.

Overall, Sephirothic Stories is a fun RPG. I would have liked for it to have been a little longer though. As it is, it almost feels like you’re playing a preview to the real game. As a result the pacing is tight though as you jump from one event to the next. It also could have been more difficult but I’ll never fault a game for being too easy. After all, there are many ways to make a game more difficult for yourself. One of those ways would naturally be to just turn the game’s difficulty setting over to Hard. That’s a pretty simple way or going about things right? I’d be game for a sequel to this or maybe some kind of crossover at some point. One thing’s for sure, the developers have really mastered the menus at this point. All RPGs should have some of the quality of life bonuses this one has like turning battle effects off and speeding up the turns. Auto battle would be amazing for helping with grinding in other games. Since your characters can only use the standard attack when in auto mode it also ensures that you don’t use it as a crutch. If you’re always wondered about going into the RPG genre but was unsure about them because of the length, this is a good one to start out with so see how you enjoy it all.