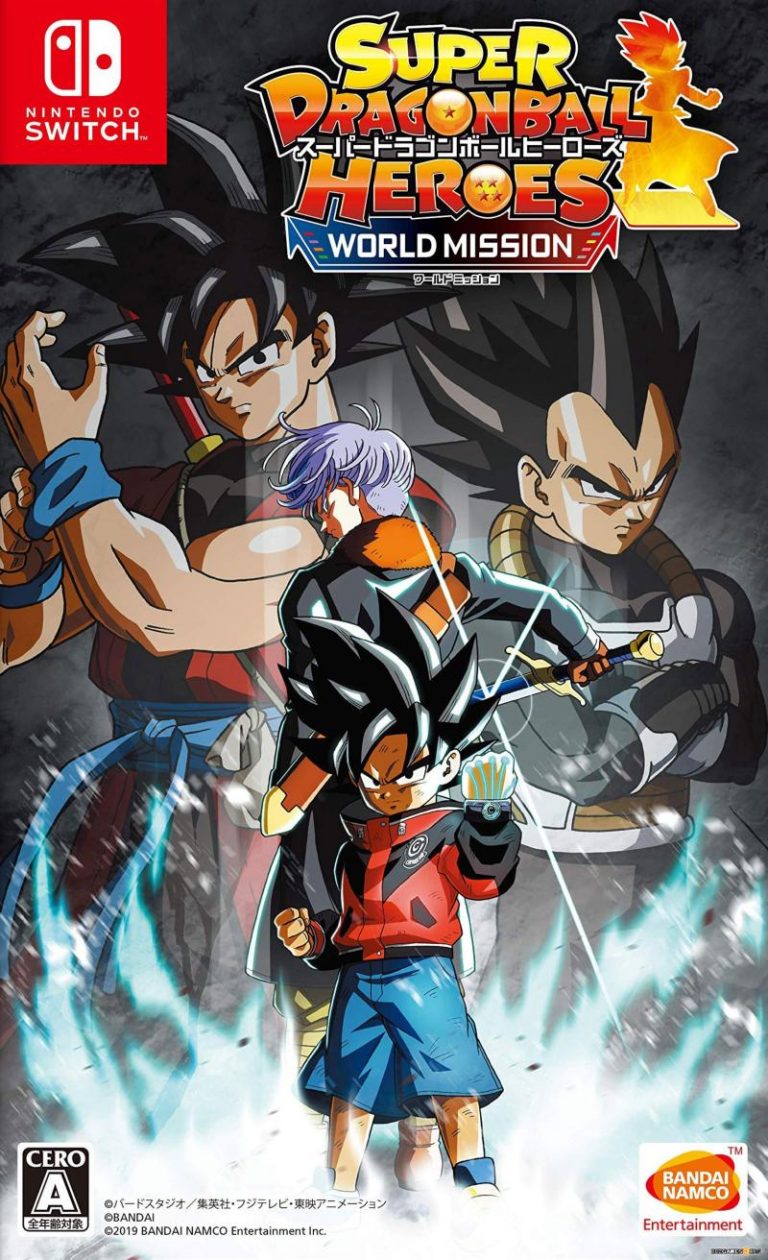 It’s time to take a look at the recent Switch port of the famous Dragon Ball Heroes game. It really is impressive just how far this part of the franchise has gone. It now has several manga titles, an ongoing anime series and of course the video game ports. It’s a nice continuation of the Dragon Ball series that is able to get quite out there with the content it brings to the table. There are numerous characters and super forms here since nothing is considered too crazy to be implemented. The gameplay style is pretty different and will take some getting used to, but is considerably better than any of the card games I’ve played for the series before. It feels like a great RPG and I’d be up for more games with this style.

The plot starts off with a kid (I called him DReager1) who decides to play some Dragon Ball Heroes. It’s a card game that has gotten very popular on Earth as you get to assemble a deck of Z characters and fight it out with others. DReager1 quickly finds out that it isn’t all just a game though as the best player in the world shows up and tells DReager that there are villains seeking to change history in the Z world. He must now team up with other Dragon Ball Heroes to foil this villain’s plans. The villain goes by the name of Sealas and he is reasonably strong at around SSJ3 level if not higher. What really makes him dangerous is his A.I. sidekick though. It grows stronger with every opponent it watched or consumes. If the heroes don’t stop him fast then it’ll be all over.

The first thing you’ll notice when booting this game up is how extensive the content is. The main campaign alone will take you over 20 hours. After that you have adaptions for some of the movies, all of Dragon Ball Super, and the rest of the Heroes exclusive content. Trying to complete all of this will likely take you 50 hours or longer. Then you can start trying to collect everything. I’m thinking this is 100+ hours easy and of course you’ve got the online vs mode which never has to end. All in all this is a great game filled with a lot of value. So long as you enjoy the gameplay you won’t be bored.

So lets talk about the gameplay. It’s one of those styles that is easy to get into, but very difficult to master. You assemble a team of 7 warriors. At first you won’t have a whole lot of options, but getting new cards isn’t hard. It’s a lottery system though as you pay 10 tickets to get 10 characters. Once you’ve assembled a team that you like then you give them enhancements which increase their stats or give them access to cool abilities like double attack. You’ll want to have abilities that complement each other as well as compatible partners so you can fuse fighters or assemble them for combo attacks.

At that point the match begins. Each round will let you place your fighters among 4 different rows. The back row allows them to recover stamina while the front rows let you attack. Typically I like having half of my team in the front and half in the back, but by the end of the game you’ll have a lot of abilities that replenish stamina so you can just jump in and keep on fighting. When you use an ultimate attack or spell sometimes you’ll have to trace actions on the screen but they are extremely easy so you will likely never fail any. The first team to either eliminate all of the HP from an opponent or the one with the most health after 5 rounds is the winner. There’s a lot more to this than what I mentioned, but that’s the jist of it. The rest I think you’ll get the hang of naturally.

The core of the gameplay comes from the clashes. Every time you attack or block a bar will show up for both sides. You want to press A when it is closest to the top and likewise for the opponent. The bar can be sped up or slowed down based on abilities. Everything rides on these bars including your special attacks so you can really boil it down to “Win the bar and win the game” You will want to get really good at the timing if you want to win. This game is actually very difficult. Without the right moveset you could find yourself fighting the same opponent over and over for a very long time. Grinding out the levels can be a little difficult so you’ll want to head to online levels to give your characters the edge they will need. You can’t level up character cards, but you can level up DReager1. This could easily be the toughest game I’ve played in years so it was pretty satisfying to complete it.

With the soundtrack we have all of the insert songs from the old Dragon Ball Heroes promos. That was definitely nice to see and you can even have them play over the normal gameplay so then you’ll be seeing them a lot. The only issue is that they’re very short so you’ll be hearing them loop over and over multiple times in a single fight. The rest of the soundtrack is also pretty good. They’re simple, but catchy themes. As for the graphics, they definitely look pretty good. It’s nothing like FighterZ, but the arcade style is likely what helps the game have so many different character models. It’s a simple look, but one that ages well. Then you’ve also got 2 animated cutscenes that were thrown in. I was hoping for more to be honest especially since the game starts out with one, but 2 is better than none.

If the game has an issue it’s that the various mechanics aren’t explained very well. There are quite a lot of tutorials, but even those aren’t able to explain everything. (Which shows how complex this style is) You’ll want to learn the mechanics from GameFaqs or Reddit if you’re unsure about something. For example, when you obtain the Dragon Balls and make a wish you are given a lot of options. One option is to rank up your lead but one thing that’s useful to know is the longer you wait, the better his stats will be. You can rank him up 4-5 times so it’ll also take a while if you decide to take him to Level 99 each time. (He reverts to 1 for each class up but gets a percentage of his old stats) If you don’t care about the post game then just rank him up right away each time. He’ll still be plenty strong by the time he is in Super God level.

Another thing to note is that the character animations are unskippable. This does admittedly result in some rather tedious battles at times as you are watching the characters perform the same actions over and over again. Each battle can be very long and there are dozens of battles to complete in order to conquer the story. Typically you can read something while playing as the game only ever needs one hand to do all of the controls. I did a lot of multitasking, but otherwise I think the game definitely should have reduced the turn time. Simply having the combat animations be toggled off like in Pokemon/Digimon would have helped immensely. That way you still have the option to keep them on if you really want to see the supers. That’s more of a quality of life upgrade though, it’s not something that actually hurts the title.

I don’t think I’ll even go that far into power levels as that always gets dicey with Dragon Ball, but I suppose it wasn’t all that bad. One thing you’ll notice is that DReager1 is super overpowered though. He’s able to handle SSJ3 Legendary Broly in his SSJ1 form. That’s pretty good eh? As for the plot in general, I definitely thought it was a lot of fun. It was great to be able to see so many different eras including the Tournament of Power. I do think it’s a bit iffy that Sealas was able to escape even Zeno and the Grand Priest, but I guess he needed to keep his hype.

Sealas was definitely a great villain as well. Not only is his backstory rock solid, but I also liked his final form. He does feel like an amalgam of various DB characters for a while and then he suddenly takes a very Final Fantasy esque appearance by the end. There are a lot of similarities between him and Goku Black which the game also addresses. Sealas is definitely a character that you’ll remember and I hope he gets to appear somewhere else someday. Maybe the online TV specials will adapt this game someday, that’d definitely be cool.

Overall, Super Dragon Ball Heroes is definitely a great game. I can see why it got so big over in Japan. If they keep on giving us free updates I suppose there won’t be a need to make a sequel anytime soon, but if they ever do make one I’ll have it on my radar. Maybe someday when there are less games on the backburner I’ll also check out some of the post game content. I gotta see if it lives up to the hype of being as difficult as I’ve heard. I somehow think it probably isn’t exaggerated though. As it is the final boss was pretty insane. I’d recommend taking a look at the gameplay online. If it looks like your style then definitely take the plunge on this game. It’ll keep you busy for quite a long while.