Suggested by Sonic The Brood are very powerful when in a group but one on one I don’t see them doing a whole lot to Tarantulas. He’s got a ton of firepower on his side for one thing. Additionally, blasters are usually the optimal way to defeat creatures like the Brood. It won’t take long for his firepower to just completely wipe the Brood out. The Brood’s best bet is to try t o get him off balance with a quick tackle or something like that. It’s not likely to happen though. Tarantulas wins. 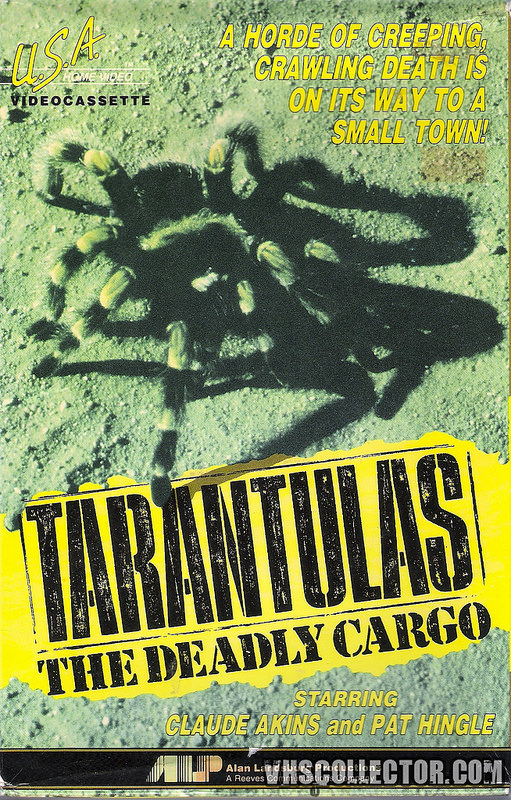 The animal based horror films continue as we get to see what the spiders can do this time around. I can confirm that they have the upper hand on the humans as expected. However, the film does rely a lot on your suspense for disbelief once again. Spiders are certainly more intimidating than ants, but still within reason. It’s about what you’d expect which at least means that the film lived up to the premise as best it could. It simply couldn’t rise above and beyond it.

The film starts off with two aspiring entrepreneurs trying to get coffee out of the country. They realized that they could get rich from it, but the problem is that the corrupt government officials want a bribe first. The two guys get the money by smuggling some people out of the country, but what they didn’t count on were a few extra stowaways in the form of spiders. These spiders murder the crew and crash land the plane over by the real main characters. Charles and Cindy were looking forward to having a nice vacation when the crash happens and they quickly go investigate. Unfortunately, they don’t realize that it is related to spiders for quite a long while.

It’s pretty straight forward as the spiders start murdering everybody as they head for the orange farm. See, what makes the situation very tough for the heroes is that the town isn’t very well off. It’s actually quite poor and the only thing that keeps the society okay is the fact that they sell off their oranges at great prices. That’s why the mayor has decided that nobody is going to mess with the crop. He will have the town’s citizens/slaves work on it day and night even though they may get bitten by the spider and then die. The poison in this film is shown to be so lethal that you are dead in under a minute so at least it’s very quick. The Mayor is corporate to the core and does a good job of keeping everyone out of his way. Even when the crash first happens he refuses to use any of his water so the fire chief has to handle it. You can’t say that this guy isn’t consistent. As much as the other characters don’t like him, they still have to admit that he has some points. If the crop spoils then the whole town is doomed just as much as if the spiders got to them. They just can’t be too extreme either so it’s a tough balance.

The film would have largely been avoided if not for one very forced scene near the beginning. So, the plane has crashed and it’s leaking gasoline. The fire chief and his men have the situation under control but then a biker dude shows up and decides to play a game of chicken with the plan. He loses of course and crashes the bike into the gas which blows everything up and gives the spiders a chance to escape. You’re just wondering quite a bit what that guy was thinking and why he would lose control so easily. I guess it’s the only way that the spiders could escape but you have to question how smart this town is. Even Charles and Cindy don’t seem like responsible characters since they were going to go on vacation during work hours so any pilot in the area would have been doomed. Not very professional if you ask me.

The film also got a little darker than I thought it would be with the deaths as a kid actually doesn’t make it through this experience. Based on how long he lived after the bite I expected it to be a false alarm, but the film actually went all the way. The kid was a really bad character but it’s still not a fate you would hope for. He knew that the spiders were poisonous so he shouldn’t have tried to grab one with his bare hands. What was he thinking? That’s just not a very good idea on his part and he ended up paying the price for his mistake.

The climax of the film has a forced moment much like the beginning. So, there’s this minor subplot that comes out of nowhere and has no bearing on the film where a girl is cheating on the main police officer with another guy and then she dies. Well, the rebound guy decides to avenge her by blowing up the orange plant and all of the spiders inside of it. The only problem is that he trips multiple times until he finally lands in the middle of the factory and shuts off the power to the whole place so now everyone is stuck with the spiders. That whole sequence just made no real sense. I can buy into the factory being completely electronic so if the power goes off then you’re toast, but it is still a minor stretch since you would usually expect to have some kind of manual override system in place. I guess Mr. Corporate just didn’t figure he would need one and decided to cut down on costs.

I do think the humans should have more confidence once inside though. They have the high ground and are armed with gloves. They can just start punching and kicking rapidly. The important thing is to move quickly and to avoid having any of them over you. Follow those steps and you should really be quite fine. The very ending of the film will also make you shake your head since the main characters basically ditch everyone. Based on the numerous spiders in the facility, I doubt they made it by 8:00 clock so the place likely fell into bankruptcy. It’s rough, but trying to cheat the health regulations just doesn’t pay off.

The film doesn’t really go for too much shock value or violence which is nice. It’s not quite as plot convenient as Ants either where they had hundreds of chances to escape. It’s still not really a good film though. We get some spider violence like where someone crushes one and a kid keeps poking one. The only real highlight of the film is that the cast of characters is a little better than I expected they would be. At the very least I liked the Fire Chief, Charles, and the Mayor. Some characters were essentially filler and didn’t need to be around like Mr. Rich. The scientist was also fairly reasonable as he at least figured out that they died of poison pretty quickly. Based on how swelled up the first bite we saw was though, I don’t know how nobody else noticed this.

Overall, Tarantulas plays it by the books. The Spiders take over the town with frightening speed and you’re left to wonder how 3 spiders became around 300 so quickly. I guess they breed and insects/small creatures do tend to breed very quickly, but isn’t this stretching it? I suppose that I don’t really know one way or the other. If you like the ideas of animals vs people then this is the film for you. There are a lot of films about the food chain trying to change and all, but I’d say this is probably one of the better examples of it. I’m not really a fan of the genre by nature, but considering that then this one wasn’t too bad. If you want a giant animal though, then you’ve come to the wrong place.

Tarantulas may be a robot, but that doesn’t mean that Skin loses this fight. Skin has beams that would be able to take Tarantulas down pretty fast. Skin is a being of pure power and has fought with the best in the past. Skin wins.

Zane has lots of dragons that can make mince meat out of Tarantulas. Tarantulas is a robot and can be melted with one well aimed fireblast. Tarantulas just can’t win this battle. Zane is too powerful and blows all of his opponents to dust. But that’s what they get for fighting Zane. Zane wins.

Tarantulas is a Transformer. Lady Deathstrike is one of the only people who has adamantium and a healing factor. Those can prove tough. Sadly for her Tarantulas has missilles and beams. They can win. Tarantulas wins.