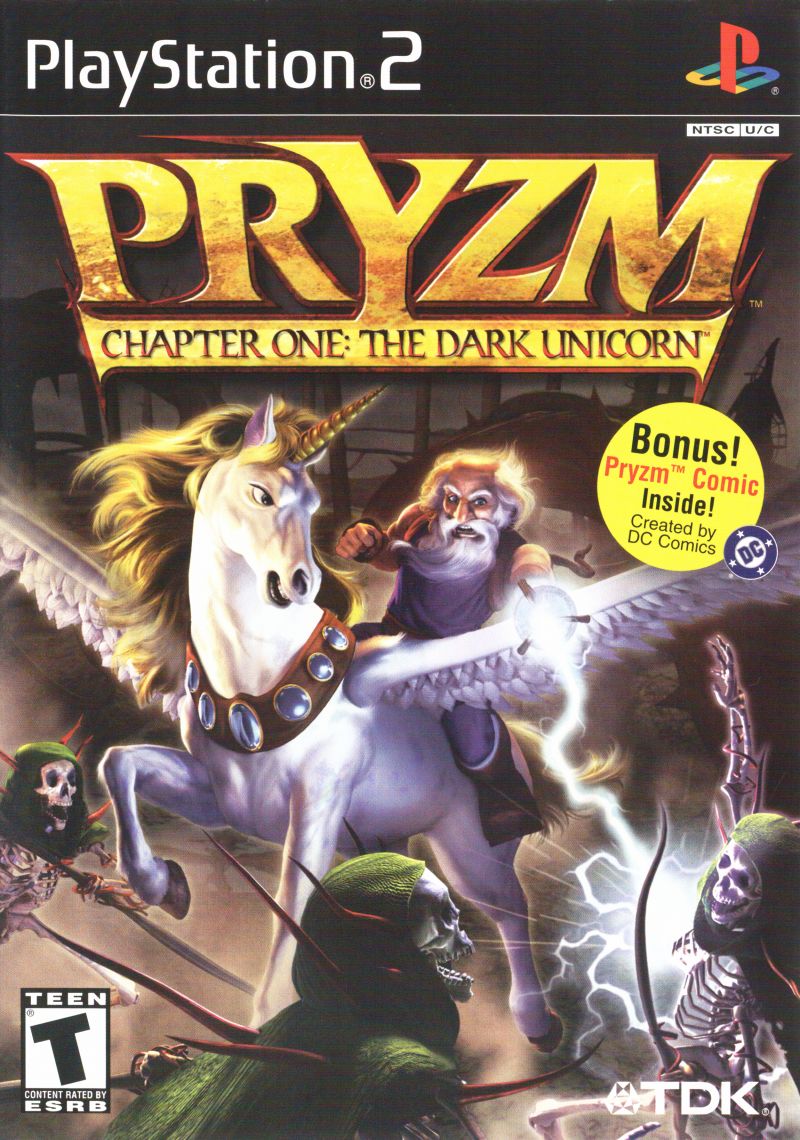 Pryzm is one of the oldest games I have on my backlog. I remember playing level 1 many years ago and quickly diving out of the game because of how crazy it was. Well, I finally went back to it and I can’t say that the game has aged very well. The main problem here is really just the fact that the gameplay is not explained very well at all. This leads to a whole lot of guessing/trial and error until you get the right combination down. Then you have a move that you’re taught in the tutorial but never works in the actual game. Did they forget to program that in? Wouldn’t surprise me.

The world has been split into many factions due to a plague spreading across the land. Everyone believes that a Unicorn started this global pandemic and so they have not been doing very well. Or at least that’s implied but the only kingdom we actually see is ruled by Unicorns so…I dunno. Well, Pryzm has decided to go and put a stop to this and she is accompanied by an old Dwarf who isn’t thrilled about the partnership but wants to prove that the Unicorns did start this mess. The duo will have to go and purify all of the countries in the land and may also have to go up against the embodiment of darkness itself.

The gameplay is in a 3D perspective. You ride around on your Unicorn as you search for flowers. Each level has 5 flowers to destroy which then allows you to get to the core plant. Destroying that purifies the land. There are 4 worlds and each of them have 5 levels to conquer. Once you have done that then you will unlock the final boss. The objectives in each level are the same but that doesn’t mean it’ll be easy. The flowers are completely invincible unless you destroy the minions powering them up. Some are immune to your sword so you’ll have to hit them with energy. You also have to do this quickly because the minions respawn in under a minute so taking out the flower is your best bet. You also don’t have a lot of energy and the only way to refill it is to lose a life or run back to the last purified area.

For your attack options you have the sword, magical energy blasts, and then the Unicorn’s horn blast. You’ve also got a charge attack but as far as I could tell it doesn’t deal any damage to any of the enemies you fight in the game so I’m not sure what that’s all about. You can also hold your sword out to sense where the next flower is which is nice…or you could just press R3 which brings up the map and shows you exactly where it is without relying on a magical compass of sorts. Personally that’s the option I recommend. So when you face an enemy with a red barrier then you need to use energy blasts. Against the plants the sword is the best bet and for bosses you need to shoot your magical blasts at it and then use the unicorn blast to deal damage. Does the game tell you any of this? No, so try and pick up on things as much as possible.

There are also some flowers where it is impossible to beat all of the enemies with the limited magic you have. The trick is to weaken all of them without dying and then run back to the last save point which restores your magic. Go back to the flower and then finish them all off. It’s a bit tedious of course but it’s really the only way to do it. Once you’ve got these tricks up your sleeve then you’ll be ready for the game. It’s just that finding all of this out the hard way doesn’t make for a very entertaining experience. By the time you’ve died 50+ times you’ll just be ready to move on. You’ve got unlimited lives at least so that helps a lot.

The game is rather short. With only 20 levels and each one being completable in around 10 minutes or so this can be about 3 hours. You do have to factor in the fact that it’ll take time to get used to these controls though. I’d say that the game took me around 6 hours or so. There isn’t any replay value here though so what you see is what you get. You can replay old levels of course but that’s it. There are no collectibles, upgrades, or anything of that nature. So hopefully you’re on board with the story. I didn’t consider the story to be all that bad. There aren’t a lot of cutscenes as most levels just end with some stock narration from the characters you saved. Occasionally you’ll have the dark unicorn show up to taunt you a bit or even to beg for mercy. He can never decide if he is a hero or not. I suppose the darkness just had too hard of a grip on him.

In terms of graphics the game is going for a very different arttyle. It’s fairly dark and I would say that the Dark Unicorn’s design really looks impressive. The gameplay is not quite as good as the cutscenes though and I would have to give that one a thumbs down. There just doesn’t seem to be a lot of effort put into the game. The soundtrack is quite limited as well and it should be noted that during gameplay you will be hearing the same lines as the characters argue over and over again. It was a nice touch that in the final levels they spam lines where they actually get along a little better now. At least the game was trying something unique there.

Overall, This is one of the few games that I would not recommend. I’ve played hundreds of games and there are probably only a dozen or fewer games that I’d say were just not good. This is one of them. In a way it’s regrettable since once you get used to the gameplay you may find it enjoyable but it takes way too long to get to that point. The game also fails to actually tell you the rules of the title so you’ll need to find other sources to help you out there. That should never happen in a game, but especially not for a platformer which is more of a basic genre as is. Just tell us what the objectives and controls are and we’ll be able to do the rest. I can see why we never got a chapter 2.

As expected this game doesn’t keep track of any stats after clearing it. I’ll definitely have this review up pretty soon though.