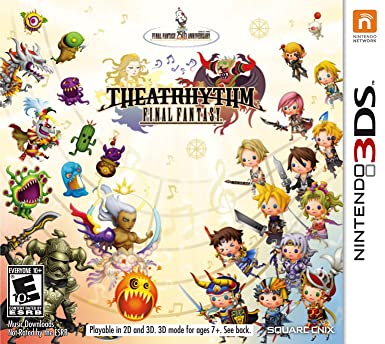 I bought this game at the same time as Melody of Memory as part of my impromptu music batch but I probably should have played them in reverse. They’re both good games but Kingdom Hearts is just on a different level in virtually every category. This one also doesn’t really have a plot so the gameplay is solid as always but it’s naturally not going to stick out nearly as much. It doesn’t have the same level of content either but if you aren’t comparing this game to another one then it holds up on its own.

The game follows a fairly strict set up which is that every main Final Fantasy title from 1-13 has 3 levels in it. One is a standard rhythm stage where you have to press the buttons at the right time in order to score points and win the level. You have the cinematic levels where there is a cutscene playing in the background and your cursor is moving so it can be a little trickier to get the timing exact. Finally there are the boss levels but they play out the same way as the standard levels, only you see enemies getting blasted in the background as you land the combos.

That comes out to 36 levels and each one is only a few minutes long so it really won’t take you very long to beat this one. I cleared it in around 2.5 hours so you will probably beat it in around the same time since I didn’t lose any levels. Not to say there isn’t bonus content though. You can try to beat all of the levels again in challenge mode or tackle some kind of shadow level set up. It seems like survival mode since there is a ticker for how many creatures you have defeated.

The game also has an internal achievement system that they call trophies so that ought to buy you a bit more time as well. I barely got any trophies during my play through so you probably have to play other modes a lot. My total gem count was also really low and it seems like you unlock more characters that way.

The characters don’t play differently or anything but I suppose it would be fun to play as your favorites. One missed opportunity here though is that the characters all sound like robots. Before each level every character says a line but the sentences rarely make much sense. It seems to me like they have a random word generator and each character says something out of that which is then turned into a sentence. Felt kind of random but also pretty pointless because as a result there is no real dialogue here.

Even the descriptions before each game are so random that they may as well not be there. You certainly won’t get what is happening and for people who have played the game, they didn’t need the recap in the first place. So this is something that could have been improved. In general I feel like the game could have used more polish. It’s really just a way to listen to the classic songs from the Final Fantasy games and it felt like the devs didn’t want to go too far beyond that.

The soundtrack is top tier at least though. Final Fantasy has always had great tracks historically and that doesn’t change here. Final Fantasy XIII still sounds very grand and operatic and Sephiroth’s theme is fantastic. You really can’t go wrong with intense themes like this. Since the game is music based, it would have been a shame if the soundtrack wasn’t amazing all the way through.

It’s actually a little harder to get S ranks then you would think so if you intend to max out the ranking everywhere then you better prepare to put in the work. You can’t just select a single stage after all, you do everything in pairs of 3 stages so that means if you mess one up then it destroys your whole set. I would definitely prefer if it was just the one level for that reason. There were many games where I got S ranks in two out of three but then the three one tripped me up. Not being able to just replay that stage right away is a hit unfortunate. Not that I was aiming to get all S ranks just yet but that immediately makes the trial that much more difficult.

I didn’t talk a whole lot about the gameplay but there are less buttons to worry about here which should help at least a bit in acing the levels. For example, you don’t use the d pad or l and r buttons here. In fact, you don’t use any buttons. Its all on the stylus which means that you never have more than one object coming at you at a time. That’s considerably different from Kingdom Hearts where they routinely would throw 3 items at once. I would say this game is easier as a result and if you put your mind to it you should get the objectives down without too much trouble.

Overall, Theatrhythm is a good game. I feel like it leaves a lot of meat on the table so if this were sold at full price I would probably have been disappointed. I got it for very cheap though which helped a lot. Additionally, I do see this as the kind of game I could go back to and play a lot if I had more time and less games to play. Back in the day I tried to 100% many games like this one on the DS. I feel like it would be a very pleasant ride. I suspect the sequels will do more with the concept but if you’re looking for a title to test the waters before you really get into the music genre then this is a good one to use. Since there isn’t a true story, you can just focus on the gameplay.