There are no stats…unfortunately. Still, this game was certainly very unique to play! 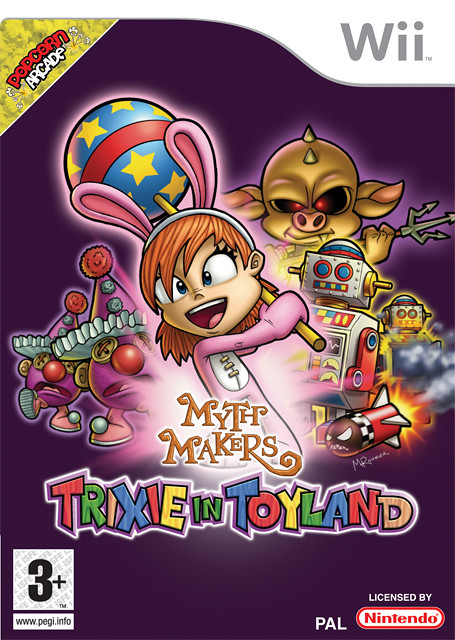 It’s time to take a look at another infamous Wii game from back in the day. While Trixie isn’t quite as well known as Ninjabread Man, it is on the same level. It is by the same company after all and the game is almost completely copied from the Ninjabread Man title. Seriously, it’s probably hard to believe but you are basically playing a reskinned game. Even the main menu theme is exactly the same. It does seem to be a little more polished though, but this works as a doubled edged blade. You’ll see what I mean in a moment. Trixie’s a bit of a bad game due to the short length, but it certainly could have been a whole lot worse.

As with the Ninjabread Man, there isn’t really a plot in this one. You’ll have to check out the back or read the booklet if you want to get the story behind the game. You play as a girl with rabbit ears who goes around whacking people with her weapon. Eventually, you reach the final boss and take the win, freeing the land from the oppressors. By this point, you will notice that the game did have higher production values than Ninjabread Man. For starters, there is actually voice acting in this game. “Take that buster” is Trixie’s catch phrase and she tends to say this when you hit one of the enemies with her weapon. As you can expect, this does get a little repetitive so I’m glad that it doesn’t happen every single time. It seems to be random, but at least I do like her enthusiasm. The villains also yell “Destroy” whenever they fire a missile. Those guys are tricky, but nothing you can’t handle.

There are two main types of villains. The robots are the strongest and I recommend taking out from afar. That being said, they’re a lot weaker than the counterpart from the Ninjabread Man so you can win in close quarters combat as well. The controls are a lot more responsive than Ninjabread Man so you can actually fight normally for a change. The other enemies don’t even try to attack you all that much so you can just swing at your discretion. The part of the game that is a little tougher than Ninjabread Man is the jumping part. The game loves to eat your double jumps so then you end up falling into the gap and plummeting to your doom. Trust me, it’s not a fun way to go out. This won’t be much of a problem until the final two levels, but you should expect to lose many lives at that point.

The main levels are all in 3D and you travel through the level trying to grab the 10 puzzle pieces to complete it. They can be a little hard to see, but luckily you do have a compass which helps you find them. It’s certainly not the most accurate one by any stretch of the imagination, but it works well enough. What does make things difficult is that the first level is very large. Even by this game’s standards, you’ll have a hard time locating anything. There are around 10 floors and all of the differently colored blocks start to look the same after a while. That level took me a very long time and naturally, losing a life can be very sad because you go all the way back to your latest check point, which may not have been all that close.

This is really what I meant when I said that the extra polish was not necessarily a good thing. The levels are a little too big now and while they have more of an actual design than the Ninjabread levels, it also means that it takes a little longer to find everything. The game is also longer than its rival, which should be a good thing in theory, but I wouldn’t have minded it only being the usual 4 levels. There are 10 levels in this title although 5 of them are fairly short.

After each main level, there will be a bonus one. The gameplay for those varied from overhead to side scroller. They were actually pretty fun and were more enjoyable than the main levels. You would have to reach the goal while surviving from these different gameplay styles. It’s hard to see where you are going so I recommend taking your time. As for the final boss level, it’s a small one that just has you work on getting through a few jumps. The actual boss is very easy and you shouldn’t lose any lives against him. Just run around the guy while shooting your darts the entire time. The damage will built up and the villain eventually falls. It’s much safer than actually trying to fight the guy in hand to hand combat.

Graphically, the game isn’t all that bad. It certainly looks better than Ninjabread Man, but still wouldn’t hold up all that well to the average Wii game. At the very least, I did like Trixie’s design, but the main villain could have been a little cooler. The soundtrack is pretty bad and the fact that it has the same theme as the other title is pretty lazy. It works for nostalgia like having Melee’s theme in Smash 4, but it shouldn’t be reused for convenience.

There isn’t really any replay value here so that hurts the game a little. It’s still very short even if you do end up getting lost a few times so this wouldn’t even last you the full afternoon. Luckily, you can grab it for a few dollars, but that’s why I definitely could not give the game a positive rating. Honestly, it would have probably dropped to a 3 if it had gone on for much longer. The final boss level was pretty frustrating as I kept dying to the same jump and the final main level was a little too much of a maze. It also had tricky jumps that could be quite tragic.

Overall, Trixie in Toyland is actually not as good as Ninjabread Man even though it seemed to have been more refined and to have gotten more of a budget. Sometimes more content isn’t always a good thing. I did appreciate the voice acting though and the fact that the game actually had a final boss was also a nice improvement. The minigames were solid too so if not for the main level designs being so bad, this title would have had a decisive victory. I certainly recommend trying it out for the novelty value, but you won’t be missing much if you decide to skip out on this one. I’ll be trying out the Trixie racing game soon so we’ll see if that game is able to surpass this one. I don’t see how someone could mess up a racing game so maybe we’ll finally see a 5-7 star game from this company.