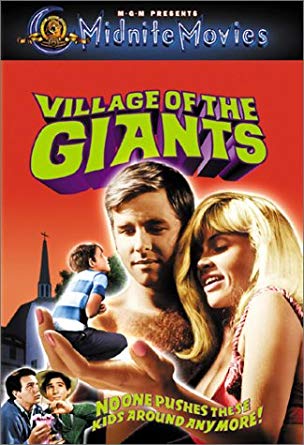 It’s time to look at an old film where giants came into being. I would say that it’s about how power corrupts, but these kids were already corrupt from the start so it’s more like they finally got to push people around. The film is pretty aimless for the most part though with many scenes being dedicated to dancing and singing in order to stall for time. It’s definitely a film that’s gonna get a thumbs down from me.

The film starts off with a group of teenagers crashing their car and they spill out into the rain. They’re all pretty rowdy so they start a mud fight and dance for a while. After that they figure they should try to find some shelter and head to a nearby village. In this village, Nancy and Mike have stumbled onto a new discovery courtesy of a kid named Genius. It’s a spongecake that turns you giant once you eat it. Mike is determined to get rich from this, but ends up giving some of the formula to a cat, 2 Geese, and a dog. Pretty soon the whole village knows about it and wants their hands on it. Mike tells them no, but the teens show up and eat it anyway. Now they’re all huge and they want to take over the town. Can Mike stop them?

This movie has quite a few problems so it’s hard to know where to begin. To start with, there is way too much singing and dancing here. That wouldn’t be a problem if they were good of course, but none are. The dances are the same motions over and over again. Each dance seems to last for an eternity and then the songs also tend to drag on. They never add onto the plot either so they’re definitely just here to drag out the film. The plot would barely have lasted 40 minutes otherwise.

Then the writing is consistently iffy. Mike ends up cheating on his girlfriend for a bit just to mess with the villains and fool them into thinking he was being tricked. Not a very nice partner to have eh? They tried the same trick on the girl only she didn’t even entertain it. (Although she was getting dangerously close) So you already can’t root for the heroes. Mike also doesn’t seem all that smart like when he tries to fight the leader of the teens. He’s luck that the hit didn’t completely destroy him. There’s also a scene where the town tries to tie up one of the giants and they actually succeed which was a scene that made no sense. With a single movement he could have knocked them all over, but instead the giant just seemed confused and almost mindless for a moment. It just didn’t make any sense.

Naturally the teens don’t make for good villains either. There’s a little friction between a few of the guys as they bicker a lot and for a wile there you think there’s going to be a power struggle. Surprisingly it never happens. The leader just folds every time the group wants to do something drastic. They definitely have a lot of fun making fun of the adults, but beyond that it’s not like they had much of a plan. Honestly they just would have gotten bored after a few days I expect. It all would have been routine by that point.

You can probably guess from the premise that this film isn’t really meant to be taken seriously. It’s definitely comedic for the most part but the film just isn’t quite as funny as it thinks it is. Take away the dancing scenes and that would have helped the film a bit for sure, but even without that there just isn’t much to the film. The dialogue is very weak and there are no likable characters. It would have been fun to have seen more of this from the adults perspective though. Maybe have a bunch of government guys walk in and start making demands or something. Instead the adults seem a bit slow on the uptake like when they order the teens back into the theater. I mean…they could have just squashed the cop so he got lucky. Also, how did nobody notice that they kidnapped the sheriff’s daughter? That seemed a bit iffy. It would be easy to grab her of course, but surely the town should have known about it.

Part of the problem throughout the film with the humans putting up a resistance is that the giants are way too strong. They could have easily ended the whole match in an instant if they do desired. The fact that they did not is really just plot hax. The film is riddled with plot hax. The characters should have had no chance until the formula wore off. Of course, the villains should never have gotten the formula if Mike was a little smarter and didn’t leave the key right next to the safe it was guarding. That defeats the purpose of the safe.

Overall, Village of the Giants is definitely a film you’ll want to skip. It’s pretty over the top but not in a good way. The Giants don’t actually alter the plot much at all. The film would have been better if it was just about the potion going out of control and making everyone giant. They would have had to learn how to cope with this smaller world now that they were giants. Instead we had to see Mike take down a giant spider which certainly wasn’t good. The film’s very cheesy and in some ways that’s good, but it makes too many errors to really stay afloat. Cut out the fanservice and this film could have had a shot. As it stands, you should stick to Godzilla for real movies about a giant creature.