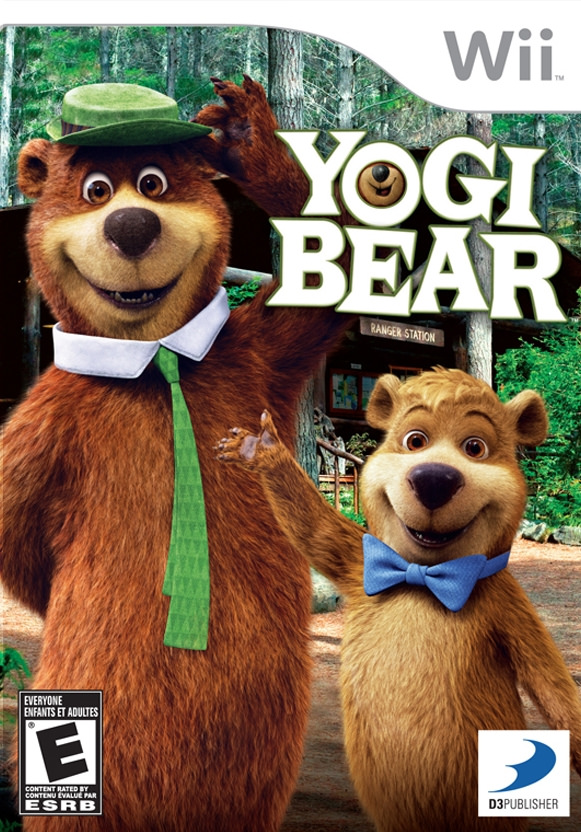 I admit that I have never seen the Yogi Bear film. It’s one of the few influential bear films that I have yet to see, but I figured that getting the game was the next best bet. It’s a fun enough game and it was clear that the developers were trying to make this game like a Mario title. They gave it a real effort, but you can’t just make an AAA Mario game with a limited budget and artificial length. It’s fun for 2-3 hours, but then you’ll just go back to playing Mario.

The plot has Yogi show up at the Ranger’s house to steal his lunch. Yogi also scatters the ranger’s photos to the wind as well so now the national park is going to be shut down. Apparently there are no backups and there is no other way to get people to come to the park. Yogi agrees to go and find the animals so he can take new pictures of them and hopefully steal some food along the way. Go fast Yogi!

The gameplay is your standard 2D platformer. You jump through the levels and avoid enemies. You die in a single hit to anything so you have to tread carefully. Luckily, there are frequent checkpoints throughout the level so you’ll never beset back more than a minute. You can do body slams to stun the enemies and get past them safely. You can’t actually defeat any enemies so you need to move quickly so they don’t get back up and take you down for good. There are pies everywhere and grabbing 50 of them will give you an extra life. There are also 3 medals in every level and I’d recommend grabbing any that you see.

At first I was ignoring them completely, but that ended up catching up to me. There is a park ranger who shows up every once in a while and the only way to get past him is to bribe the guy with medals. Getting 2 out of every 3 is a good way to make sure that you can always bribe the guy. They’re not even that hard to get as there will be obvious caves everywhere and if you see an arrow pointing right…go left. That’s all you really need to know to grab those medals.

The game keeps track of your game overs so I recommend playing carefully. I was actually able to beat the game without ever losing all of my lives. I’m trying to act surprised, but maybe this is expected right? Heh heh. The graphics aren’t all that bad. You can see what is happening at all times. It may not be high end graphics, but they serve their purpose. I do have to give the gaame a lot of props for actually having full cutscenes with voice acting within. A lot of Wii games actually don’t have this so it’s definitely pretty impressive. The soundtrack is less impressive and you won’t remember any of the tunes by the end. You’ll definitely remember the sound effects though because Yogi Bear constantly mentions how he’s smarter than the average Bee, Human, etc. He talks a lot during the levels and even talks when you try the bodyslam. As a result, you can expect constant chatter throughout, which is not bad per say, but it can get repetitive.

My main negative with this game is the artificial length. The game coud easily be completed in a single sitting if not for the ranger constantly asking for medals. Once I knew that I needed medals I was able to get enough where I didn’t have to go back anymore, but it was still a little annoying. Lets face it, even if the levels aren’t that bad, it’s not as if I want to go back and play them again. That’s reserved for a big title like Sonic or Mario. It also just shows that the developers couldn’t think of a better way to make the game longer.

There is some obvious replay value…getting all of the medals and baskets. It’s not something that would entice me to play the game again though. As far as I’m concerned, this is one of those games that you play to completion once and then it goes into the drawyer…never to be seen again. It’s fun enough and the price is pretty low so you’re getting a good value.

Overall, It’s good to see that Yogi Bear has gotten his own video game. He’s certainly the kind of character that you can get behind. He’s so mean and over confident the whole time in an “oblivious” way that it works well. The gameplay is good enough to keep you playing and at the very least there is nothing that will hamper your progress aside from the ranger. The ranger definitely brings it down by a star. It’s a good game, but one that you won’t be playing after you’ve beaten it. I recommend giving it a shot if you want a fun little platformer, but the burning question will always be “Why not just buy a more established one?” Still, it is Yogi Bear so that gives it some novelty.