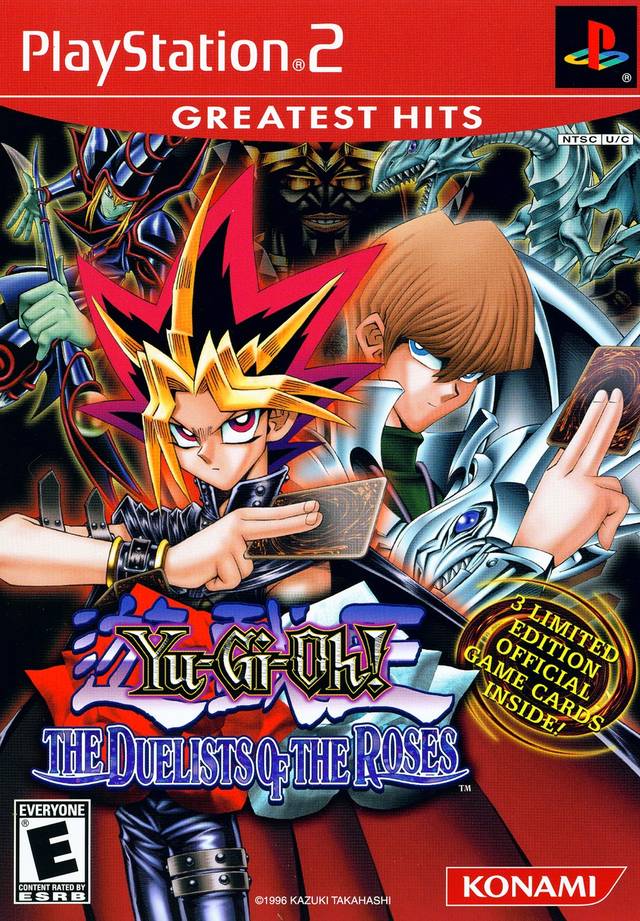 It’s time to look at what I’d say is easily the strangest Yugioh game. For starters the game has nothing to do with the actual characters from the series and the plot seems to be based on a war from a very long time ago. The story definitely isn’t very interesting and there isn’t much of one in the first place so the gameplay will have to hold the game up on its own. Will it be able to make this title a success?

When you start the game you are summoned as the legendary Rose duelist by the Red Rose army who are currently losing the battle against the White Rose. You are their last hope to try and turn the tide of the war. Seto, who is the leader of the White side shows up and asks you to join him instead to rule the world. This is where you make your choice of which faction to play as. The game is around 10-11 duels long and the path you take determines which array of fighters you will be contending with. The goal is to get all 8 of the cards by beating 8 guardians and there are some extra fighters along the way.

When you first start the game you get to choose your starter deck. All of them are pretty awful if you ask me and you can expect to lose quite a lot of duels at first. Your opponents have everything whole you’ve got basic cards that aren’t strong enough to win. What I was surprised about is that the computer already has significantly more powerful monsters at 2700 from the start while your guys are limited to 1500. Anyone who was able to beat these guys with a starter deck right off the bat has my respect on this one.

Another complication is that the game doesn’t even follow Yugioh rules. I was surprised about this because of you don’t have the rules or the characters then why is this a Yugioh game anyway? I should mention that the main connection in the story is that the characters happen to look like Yugioh characters…that’s it. It’s like when a show does a Christmas Carol and they are all not themselves for that one AU episode. This is the same concept and I guess you’ve got the monsters even if the gameplay is different.

The gameplays a bit complex, but here’s my best attempt at a solid write up. You start out with your captain or vanguard if you will. You can move him one space a time along a board that is fairly large. Around 10 by 6 or something like that. The goal is to destroy the opponent’s guardian. Both guardians always start with 4000 HP but that can go up or down based on spell and trap cards. If you attack the opponent directly then your attack power will determine how much health is lost. You can summon 1 monster per turn and that monster can move 1 space per turn unless it has a type advantage and then it can move two times. All of the opponents you fight will have the type advantage so expect them to always be moving two spaces at a time. A spell card to change the terrain comes in handy for this although they have a very limited range so they aren’t always too great. It’s still a good balancer in the right circumstance, but keep in mind that playing this spell will prevent you from summoning a monster that turn.

You gain 3 stars each turn and monsters require stars to summon. The strongest monsters need 8 stars so you can choose to either wait a few turns and summon them or keep on summoning weaker ones. Usually you want at least one card to defend yourself with and then you start saving up. Then you’ve got all of the spell and trap cards to deal with and you can fuse some into monsters to make them stronger. You can also fuse monsters from your hand but the game doesn’t let you know if they’re compatible so it’s a lot of trial and error here. If you make the wrong call then you’ll lose the first card in each fusion which can be a bit tiresome. This is the best way to clear your hand out to get more cards though. Just smash all of the cards together and next turn you’ll get 5 fresh ones. There’s a lot more to this gameplay, but it’s so complex that the only way to really get it is to play the game first hand. That’s when it’ll all really start to make sense.

As for the graphics, the game has some pretty good illustrations. For the most part there aren’t too many cutscenes but we get a few paintings at the end and one at the start. I prefer animated cutscenes but there was a good amount of effort put into these pieces of art. In game the stages and effects are decent but not all that fun to look at. All of the stages are pretty similar and the whole thing looks pretty dreamy all the time. Better level designs would have been ideal.

I already spoke to the game’s difficulty level and I can assure you that it’s one of the toughest games I’ve played. Beating the whole thing with a starter deck is impossible so the idea is you beat the first few guys, take their cards and keep on beating them til you get a lot of good ones. Then you move on. It requires a lot of wins as well as rng to get the right cards. Then in the duel you need a fair amount luck to draw the right card at the right time. Ultimately I had to just grab some cards through the password mode to get through these duels. I recommend doing this if you need to save some time because otherwise you will be here for a very long time. It does help with the replay value I suppose. The game should last you for quite a while and once you beat it you get to play all over again as the other team.

Overall, Yugioh Duelist of the Roses is an odd game with a confusing gameplay system. It takes quite a while to learn how to really play the game and even then it’s hard to get invested into it. The duels feel like they take quite a long time although that’s normal for a Yugioh game. Once you turn the animations off it speeds up quite a bit. If you like a good strategy type game then this is the one for you. There are a few similarities to Fire Emblem after all. Otherwise I would definitely recommend playing a different Yugioh game instead. My top recommendations would be World Championship or any of the PSP titles. Those actually follow the Yugioh rules and have a better plot. (Note that some of the World Championships don’t have a plot so carefully choose which one you want to play)