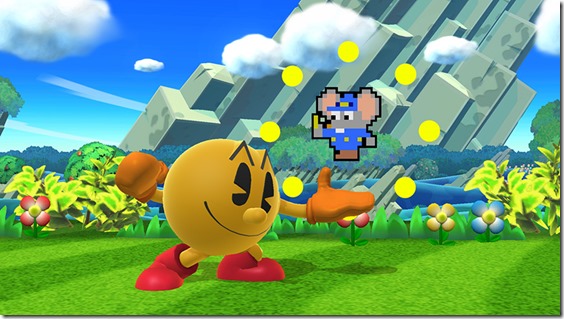 Suggested by Destroyer The Blob is as fierce as they come, but he only excels in close quarters combat. Pac Man likes to stay at mid-long range and take the enemy down that way. This means that the Blob is really down for the count here. There’s no way for him to get close enough to Pac Man to try and land some hits. That means that even if his durability holds out for a while it will eventually crumble and then it’ll really be curtains for him. Pac Man wins.

The Blob is pretty tough in his own right and it’s very tough to move him when he doesn’t want to be moved. That being said, The Punisher has attained the symbiote in the past and he was able to easily take down Spiderman. I know that we all don’t agree with the outcome, but it shows that his abilities are not to be trifled with. He’s a lot faster than the Blob and his hit and run strategy should really do the trick here. Punisher wins.

The Blob is back for yet another loss. He may be sturdy, but one blast from Thor’s hammer and Blob will be sent flying away. He just can’t resist that kind of intense power! Thor’s also a much better hand to hand fighter and could take him down pretty easily. The Blob never had a chance. Thor wins.

Colossus is pretty strong. Of course now he also obtained 1/5th of the Phoenix Force! With that kind of power not even The Blob can take him down! Blob’s strong, but slow. Colossus is also a better fighter when it comes down to it. The Blob drops down the ranks with this loss. Colossus wins.

Magneto is back and this time he’s fighting the Blob! Blob is pretty sturdy, but in the end he lacks the speed to take down Magneto. Magneto’s powers are just far superior to the Blob’s and this results in an easy win. The Blob drops down the ranks again with this loss. Magneto wins.

Spiderman is everyone’s favorite webslinger, but now he’s up against the Blob! The Blob is pretty tough and he’s hard to move, but in the end Spiderman’s still got this win in the bag. Blob’s just not fast enough to take him down and Spiderman has the power advantage as well. Spiderman wins.

Hulk has enough super strength to punch Blob to the ground! Blob may be pretty durable, but in the end nobody can take on the Hulk. Hulk smash!…and stuff. Hulk and Blob have fought different times in the past, but the victor is never in doubt. Hulk’s just far too powerful to lose. He’s the Incredible Hulk after all! Hulk wins.

Cyclops has his optic blasts. The Blob may be durable, but one good shot from Cyclops and he could be down for the count. He doesn’t have the same amount of skills that Cyclops has. Cyclops is the leader of the Xmen for a reason. Blob will never be able too match up with Cyclop’s power. Cyclops wins.

The Blob is definitely durable, but of course durability has never been a substitute for speed and blasting power. Yoshi can shoot giant fireballs and can fly. With those two abilities he has surpassed the Blob. BLob gets another loss and sinks down the rankings. Maybe one day he’ll rise. Yoshi wins.