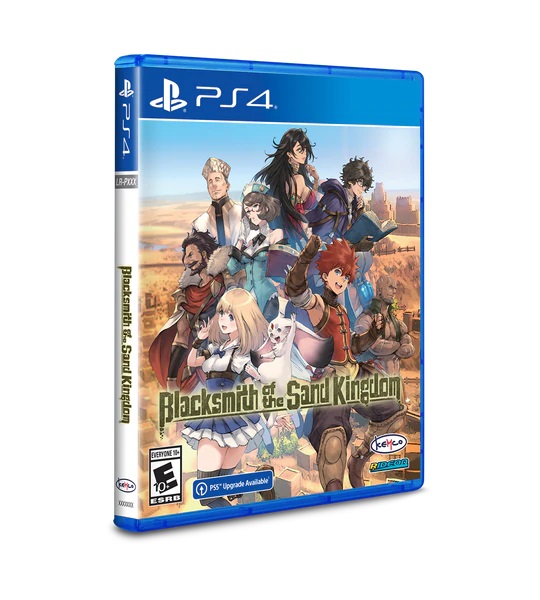 Kemco has delivered quite a lot of amazing hits over the years and this one is no different. It’s definitely very different from their other titles in a few ways which I’ll get into, but it nails it. This is really trying to cross the classic RPG style with more of a gathering game you’d think of for mobile or online gaming. It works really well in doing so.

So the game follows a kid named Volker. His father died in an accident a while back and so he had to start running the blacksmithing operation on his own. At the same time he always wanted to be an adventurer though and is at a cross roads. Fortunately his best friend says she will man the shop while he is away and a fairy also shows up to help out. Now Volker can focus on being the best in both fields and along the way he may uncover some conspiracies. At the end of the day he wants to keep his kingdom safe, whether it is through creating equipment for them or by clearing quests. Will he be able to do this?

The game’s hub world has several areas including the shop, mission area, infirmary, food store, the arena, the dungeons, and the workplace. Each area has tasks that you can do once a day. For example you can enter a dungeon once a day and you can eat once a day. When you are ready to go to the next day you can head home and build a lot of equipment to sell which triggers the end of the day. The typical flowchart here is that you will complete a bunch of ordinary missions which involve building things for people until you get a story mission. The first story mission is always to investigate a dungeon which means getting to the final floor. The second story mission will be to fight a boss at the end of it.

The story missions are unlocked by completing a lot of normal missions. There are 296 missions in the game and you need to complete almost all of them in order to unlock the final story mission so prepare yourself. While combat is important, just as important is having a lot of materials at the ready so that you can build things as needed. Each time you complete a dungeon you unlock new materials. Also be sure to stop at every store each day in order to trigger cutscenes that move the story forward.

As you can probably guess, this means you will be moving around a lot. You will also have to spend a lot of time crafting weapons and shifting materials from one form to the next. There isn’t a lot of downtime here, you’re always just pressing on to the next thing. You gotta be ready for that without a doubt. It’s more fun than it sounds though so you’ll like it. At the very least I get a kick out of it. You usually have to do this kind of thing in mobile games and it can take hours sometimes as you have to allocate resources and then just wait it out. If you’re not used to that kind of thing then it may seem tedious. I would go as far as to say that this is the tipping point of the game. Whether you love it or not will depend on how much you enjoy crafting objects.

Trust me, you’ll be crafting a lot too. I nearly completed the 100% secret gallery (Made it to 97%) by the time I beat the game because I had to cook so much. Also, the game is difficult. I had all my guys maxed out at level 99 and I still barely beat the final boss. In a sense this is because I didn’t fully master the different concepts in the game. There are just so many from the prayers you use before battle to the orbs you equip to each piece of your equipment. Each character can choose 2 classes out of 12 in order to build a solid formation and each formation can be altered. There are also active and passive skills that you have to choose.

That sounded like a lot? Well it’s even more imposing while playing. So I did my best and crafted a team strategy that I thought sounded good but if there had been any more bosses then I may have had to rethink that a bit. They really were quite difficult and the final boss took over 30 minutes. It doesn’t help that a lot of the bosses like to heal themselves or summon an infinite amount of minions. You often have to decide whether to go for them or the minion first. Each strategy has its ups and downs in that respect.

Also, they love going for the paralyze option and if that happens then your character can’t attack for 3 turns. Definitely watch out for that since it gets really tricky. The challenge never feels unfair or broken though. You’re always left with the thought that you could have assembled your team better in order to win. So as you can tell I liked this game quite a lot. It’s just a very great all around experience and there’s so much to have fun with. I very nearly got all the trophies along the way.

Now if the game has a weakness it’s that there isn’t much of a story for about 90% of the game. There are hintings at one for a while of course but it never really happens until you’re at about the climax. Then we get a cosmic being and some nice action but it’s all at the very end. It’s clear that the story wasn’t really the focus here. The focus was definitely on the whole harvesting/gathering aspect of the game. It’s a fun aspect of course so I’m glad that they handled it well but a nice story would have been fun to have too. As it is the cast is incredibly small since the rest of your party is made up. Because of that there are just a few characters around the hub world and a villain or two.

Finally, the way the equipment works is a bit too time consuming if you ask me. So here’s how it goes, when you want to change equipment you go to the screen as normal except you can’t see your current weapon’s stats compared to the one you are equipping. As a result you have to switch screens a lot to make sure you’re getting the right one. Upgrading a weapon or transferring effects also takes you to a screen with tons of weapons so you have to make sure that you’re grabbing the right one. The equipment part could be a bit of a pain so in the end I just ended up going for the ones that had the highest stats and called it a day instead of always looking to optimize. It just was not very user friendly.

Naturally the graphics are solid here. I like the illustrations and the levels look good. I wouldn’t say it feels as dynamic or polished as the Asdivine Hero titles but it still looks good enough. Meanwhile the soundtrack is good. There are some solid tunes here although a lot of the battles are so fast that you won’t get to hear it much. I tend to have the team set to auto battle in most fights because manually battling takes forever in this game. If they can’t handle the battle then I take the wheel as needed. Another small thing I like about the game is that there are keyboard shortcuts for everything and you move faster than the villains. So if you don’t want to fight some minions then you don’t have to. It’s the quality of life features like this that always put Kemco at the top.

Overall, Blacksmith of the Sand Village is definitely a great game. The way the very game is developed does mean that it won’t be for everyone though. I just get the feeling that not everyone is going to want to be spending some hours crafting equipment over and over which is understandable. It’s just so smooth and enjoyable though that you don’t even notice. I ended up having a very good time with the game without a doubt and would love to see a sequel. Just give us more of a story next time.