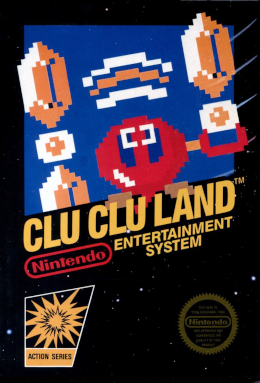 It’s time to take a look at an old NES game that I actually wasn’t really a fan of. The gameplay is unique so that is always nice to see. I haven’t played a game quite like this one. The closest would probably be DK King of Swing which has a similar concept just with a completely different gameplay style. That one succeeds a lot more than this one though. Clu Clu Land is ultimately okay in a small batch but beyond that you need to really enjoy the gameplay to stick with it. Considering all the other games on the NES I wouldn’t really be spending much time with it.

So here’s how the levels go. You play as a creature that automatically flies through the stage. The goal is to turn the stage into an image or something. As such, there are hidden coins around many of the turns. You have to bump into them all to complete the picture. Since you don’t know what the picture even looks like at first your opening strategy is really to bump into as many corners as possible. Once you’ve got the general idea of the shape then you can target the gates that you want to pass. You turn by sticking your hand out and grabbing a pole and use that momentum to go in a new direction. You can only reach out one hand at a time so try to plan your movements a few steps ahead of time. After all, each action will need another one.

Additionally you need to avoid the enemies. A single hit will take down your life so you want to live for as long as possible. The lives aren’t exactly easy to come by after all. I liked seeing the various shapes that would form. Clu Clu Land definitely has really nice visuals that have aged well. I can definitely appreciate the difficulty of making so many images using only coins. The stages remind me a bit of Pac Man with how they’re set up. It looks like a very similar style at least even if the gameplay is different. The music is less memorable, but fast enough where it’s pretty fitting while going through the levels.

So in the end the reason the gameplay didn’t click with me is that it just didn’t feel like enough was going on. Ultimately all you’re doing it turning. While you can probably break many games’ core gameplay down into a simple structure like that, you still feel like a lot is going on. This game doesn’t disguise that quite as well to me. I think a lot of the appeal will be from seeing the pictures that you create which are nice to look at, but I need more. Throwing in some physical movement would have been nice. Maybe allowing you to move the character back and forth and then you only need to use the hand feature when you want to turn. Ultimately that would still be very similar though so maybe that wouldn’t change very much at all.

In terms of replay value this game technically has quite a lot. You can keep on playing the levels over and over again to improve your score and move on to the next. I assume the game basically has unlimited levels although I imagine there will be a point where they start to loop. At that point you can really say that you conquered the experience and it really would be pretty impressive. These games were definitely not a walk in the park back when they came out and certainly not today either.

Overall, Clu Clu Land is the weakest NES game I’ve played in a bit. I definitely wouldn’t go as far as to say it’s the weakest NES game or anything like that but it just didn’t work out for me. If you like the general concept then I believe you’ll enjoy the execution. The gameplay is pretty smooth and I certainly didn’t notice any lag or anything like that. The gameplay’s also a bit familiar so I believe I probably played a demo at some point like in NES Remix or something. I think this game would be more enjoyable as a minigame.