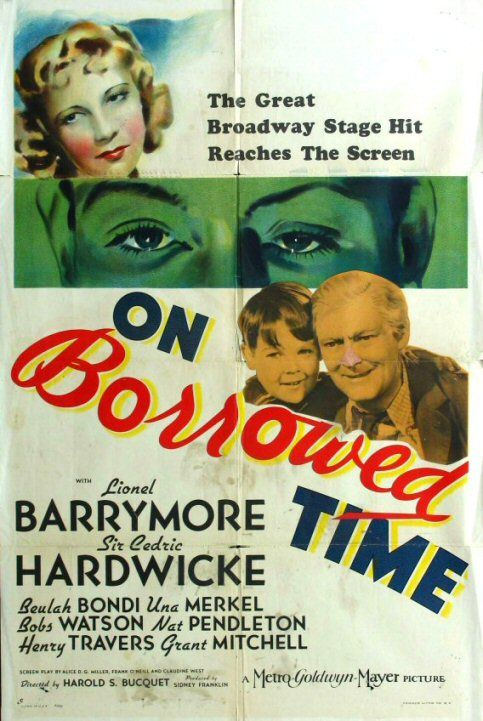 It’s time to look at a film that proves how senior citizens can still hold their own against agents of Death. It’s a pretty interesting story in that sense. The film tackles the themes of death and in some ways enters tricky territory there since they own a dog. Fortunately this is a film where we actually see how it all turns out and it manages to avoid any real animal violence. It was certainly a close call though and it wouldn’t be an exaggeration to say that the film got off lucky this time.

The film starts off with Mr. Brink destroying Pud’s parents and then escaping off into the night. We get a bit of a time skip at this point as Pud goes to live with his grandparents Julian and Nellie. He bonds very quickly with Julian, but Nellie feels like the old man is a bad influence to him. Unfortunately there is a mean aunt named Demetria who wants to steal Pud for herself so that she can get his money as the kid’s parents were quite rich. She first has to convince everyone that Julian isn’t fit to be the kid’s guardian. Her job grows easier when Mr. Brink shows up to end Nellie’s life. He goes after Julian next, but fortunately the old man’s tree has magical properties. Anyone who is trapped in the tree cannot get out unless he gives the okay. Certainly a pretty useful ability to have and he tricks Brink into the tree. Brink then curses it so that anyone who touches the tree will die instantly. How can Brink convince everyone to stay away from the tree without them thinking that he is crazy. Meanwhile, how can he keep custody of Pud when Demetria is so clever?

As you can tell Mr. Brink is a pretty serious villain. Don’t get the wrong idea here, the guy isn’t human so that makes him even more dangerous in the long run. How do you stop an agent of Death who is immortal and fairly indestructible? It’s certainly a tough case either way. If he so much as makes contact with you then it’s all over. He also typically waits until his victims are rather old so they are delirious and don’t realize that they are heading to their doom. While the guy is rather polite and may even seem like a nice person at times, don’t be fooled. Once it comes time to bring death upon his victims, he doesn’t play games. He will destroy as many people as it takes to bring his victim to death’s door. Until Julian eventually relents he murders his wife, grand kid, and even the local animals. Julian hardly had a choice by the end. This guy is merciless.

As far as Julian goes, he is a quality character. He definitely isn’t afraid of Mr. Brink or of anyone really. He talks a good game from start to finish and the guy was in the war after all so he’s ready for whatever these guys can throw his way. He even has a gun and isn’t afraid to use it. It was easy to root for him when he got attacked in his own home no matter what their reasons were. If you break into a house then you’ve got to be ready for the consequences, especially when they were using deceit as well. Julian is rather old so at times he can be slow on the uptake but for the most part he is pretty solid.

Then we’ve got Nellie who is unfortunately a little gullible. She is easily tricked by the aunt into doubting her own maid and from there descends into sickness. She should have quickly chosen Julian over Demetria and not making the right choice seems to have cost her in the long run. It’s a shame but she just didn’t make the right calls when they were needed. Naturally you’re not meant to like Demetria either. She just wants Pud for the money and is even determined to send him to an all girl’s school to try and convert him while Pud is still a kid. I think her odds of success are fairly bad since he is already old enough to realize that this is a little strange, but it doesn’t help her case as a character. She is also a little gullible.

There is also Pud of course and he’s about as good as most kids are I guess. He can just be a little annoying at times and in the end makes one of the worst decisions that I’ve seen in recent cinema. He knows that touching the tree were Brink is will cause instant death but all it takes is for Brink to call him a chicken and Pud is ready to jump in. What happened to common sense? Pud basically forced Julian’s hand at the end.

Finally we have also got the doctor who used to be Julian’s friend. This is definitely one guy that you don’t want on your side as he will betray you at the drop of a hat. It certainly doesn’t take long for him to try to turn Julian in and he even does so by trying to sacrifice Pud to Demetria. That’s really underhanded and at that point there was no way he could get any better. Julian could have maybe explained the situation better, but that doesn’t excuse the Doc.

The writing for the film is pretty solid which is good. The pacing is on point as well so it’s definitely off to a good start. At times the film can even throw some humor in which is always good. It’s a fairly soothing film as well. Now, the only issue is that it can also be a little boring as well as annoying. In a more reasonable town this situation wouldn’t have been so major, but it only ended up being kind of big since the town wasn’t very smart.

Overall, On Borrowed Time was a decent movie. It can just be a little annoying though since all of the characters are against Julian. He should have a pretty cushy end to his life, but it’s all wrecked by the Aunt who is out to get him along with all of the other corrupt characters in the town. If you think about it, everyone dies at the end. Of course, we do see that the after life is a lot of fun for everyone which helps the film skirt by the issue of the pets and all that, but it’s barely a win for the humans. I also have to wonder if the Aunt ended up getting her money after all since everyone else died. If so, she got a much happier ending than I think she deserved considering the circumstances. The ending wasn’t too satisfying, but it could have been worse. If you want to watch an interesting take on Death then this is a good film for you. It definitely has personality as the gunshot scene will prove.

Thanos is pretty powerful and has taken on the Avengers in the past! Death is usually around, but she doesn’t really get to fight much. Her abilities pale in comparison to Thanos’s and she loses this match pretty quickly. Perhaps one day she will gain super powers to rival Thanos’s. Thanos wins.

Death hasn’t fought in a while. Her mastery over death itself can’t be questioned, but she can’t exactly fight much. She has little to no hand to hand experience that I’m aware of, and she definitely doesn’t have Gemini Saga’s speed. His speed is extremely high and he takes this match. Gemini Saga wins.

Death may be powerful……but she still can’t beat Bass. One energy punch and she’s down for the count. She just doesn’t have the power too take down Bass. Bass is the ultimate being of power. He has never lost on the blog, and he never will lose. He’s just far too powerful! Death loses this round. Bass wins.