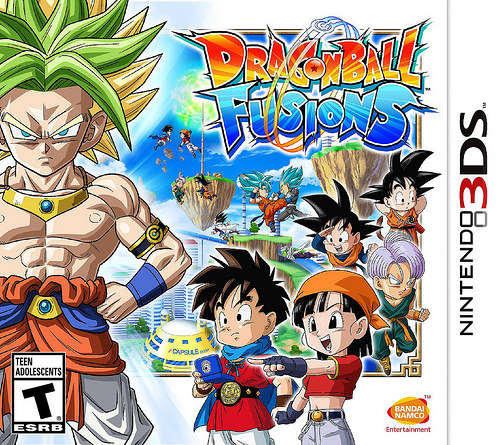 It’s time for a big Dragon Ball game. The concept of fusing characters together to form even stronger ones is certainly nothing new. People have thought about that for years with Marvel and DC even getting in on the act. Until now fusions were quite limited though, but this game changes things on that regard. It’s finally a game built around the concept so you can fuse everyone together for quite a lot of interesting results. While it’s a very different kind of Dragon Ball game compared to the others, it certainly ends up working out quite well.

The story follows a Saiyan Warrior named Terry. (At least that’s his name in my version) His rival is Pinich and they have decided to enter the Intergalactic tournament. Fighters from across time and space have been invited to attend but each group must have 5 members. Terry decides to form his team with Goku from the original Dragon Ball series, Pan from Dragon Ball GT, Goten, and Trunks. It’s a pretty potent team and they will be the ones who appear in all of the cutscenes but you will be able to switch them out pretty early in the story. Alas, getting to the tournament will be difficult as the heroes must get a lot stronger to prove that they are ready. To this end, they must recruit a great number of fighters and shatter all of the sky barrier preventing them from reaching the tournament. Legendary villains like Broly, Omega Shenron, Frieza, Cell, Buu, Janemba, and many others seek to block their way. Fortunately Terry has more potential than the whole franchise put together so there’s no way that these guys could hope to stop him. Will they win the tournament or does Pinich have a good plan up his sleeve?

The stakes may not be very high until the end, but the story is still fun. The game certainly chose some unique members to be on the main team. I can see why Goku and Vegeta didn’t make it since they’d probably be a little too strong. The series seems to take place around the Resurrection F arc of Dragon Ball Super. It’s cool seeing Terry have allies from the various Dragon Ball titles. We got to cover the original, Z, and GT. I suppose we didn’t get any Super characters because most of them are still technically DBZ characters. The climax is pretty fun as we get a really cool super form for one of the fighters. It was also a very challenging boss fight. The real final boss wasn’t quite as difficult compared to that one since nobody had healing abilities, but it was still tricky.

Lets talk about the gameplay. Instead of the typical beat em up DBZ style, this game is more of a strategy title. Think the Mario/Rabbids game coming up or Yu Yu Hakusho. You move the characters around and attack. When you attack, you decide what direction to launch them in and the opponent gets to guess which way he should block. You always have to tactfully decide which direction is best based on where you think the opponent will block. Bouncing opponents off of each other will get you bonus damage. YOu also have an Ultimate Fusion attack which can defeat most foes in a single hit, but be warned that it means all of you teammates lose a turn so you have to fend off 5-10 consecutive attacks. I’d recommend only using it when you know it will defeat at least one character. You also have Zenkai Attacks which quickly turn the game into a 3D Brawler like Tenkaichi 3 for 10-20 seconds. It’s pretty neat although it clearly wasn’t the game’s focus so it feels hastily put together. You must defeat an opponent with this attack to recruit him/her to your team.

What makes the gameplay a lot more exciting than other tactic styled games is that you aren’t limited to moving your characters one turn at a time. You can attack from anywhere with a few exceptions so the game is very fast paced. The weakness of this style is typically that battles can take forever, but this one feels more exciting. Yes, the battles still can be quite long so you’ll have to have a lot of patience with the game, but it’s usually very fun. The only matches that I don’t really enjoy are when the opponents have instant regeneration. Then you have to win in one turn which can take a while to set up. Sadly the later levels started spamming this quite a bit, but the battles like this are still few when looking at the grand scheme of things. I definitely got hooked on the gameplay by the end.

The graphics are quite good as well. There are a lot of character models in the game and they did a good job of making most of them look unique. The made up characters do look like rip offs at times, but some of them weren’t bad. It was cool seeing so many characters from Dragon Ball history as well. Everyone’s chibi style worked well without being too cartoony. I can’t say that I was as impressed with the soundtrack though. It’s pretty limited and since the game isn’t too short you’ll hear the tunes a little too often. It would help if I liked the themes, but I didn’t for the most part. I liked the epic theme for the final boss though. (Not the actual final boss, but the one that threatened the multiverse)

There’s a lot of replay value here so you’ll have a lot to do. Doing everything in the game should easily take you 40-50 hours I’d say. The main story mode is about 18 hours long. After that, you can get to work recruiting everybody. There are a ton of actual characters to recruit and then all of the NPCs as well. Then you can fulfill all of the training requirements, buy all of the clothes, and beat all of the secret bosses. I wouldn’t bother with some of these things, but recruiting everybody sounds like a lot of fun. I recruited over 50 people by the end of the game, but no named characters. I didn’t actually do any side quests although I imagine most of them will be quite easy at the moment. I certainly would have done it already if there were trophies involved and as it stands I’d probably like to go ahead and do some more of the bonus content someday. Likely not anytime soon though.

It feels pretty good to play a high quality title like this one after a lot of average-below average games lately. This one I would play for fun to level up and prepare for future bosses or just recruit extra people. It’s a game that I would look forward to playing each time. It may not be up there as the best DBZ game because there’s just too much competition but it may be the best DS/GBA/3DS DBZ game aside from Extreme Butoden and even then this game could claim victory. That one had the better gameplay but it was a little limited due to the 3DS control scheme. Fusions was just handled really well and having a full original story certainly helped. While Terry didn’t have much of a personality, Pinich felt like a real character by the end and he wasn’t bad. Perhaps a tad generic and lacking in honor, but at least he never went down the dark path or blamed Terry for anything. He took his losses better than expected. There are some power level issues in the story, but we’ll just say that Goku and friends were holding back so they wouldn’t hurt Terry’s feelings. Then everything makes more sense. I am a little upset that Terry never became a super saiyan though. That was a huge missed opportunity since everyone else basically could by the end.

If there’s such a thing as too much content, I’d maybe say that there are too many attacks in the game. It’s not such a bad thing, but you get to learn new attacks after every fight. You can save them for later, learn them, or just drop them. I usually learned the ones that looked good and dropped the rest because saving them felt like such a hassle. There are various loading screens for each action and I just didn’t feel it was worth it. The problem is that each attack has a ton of different variations. There can be over 10 different Kamehamehas that have different special abilities. That isn’t even counting other versions like the Super Kamehameha. It would be nice if you could just level up your abilities instead of hoping an enemy can drop you a better one at some point. It’s not a big deal though because you can ignore this for the most part and do quite well. It’s not really something that you have to worry about.

Overall, I would definitely recommend Dragon Ball Fusions. It may not look like it would be your thing from afar since the whole strategy turn based combat thing isn’t for everyone, but it’s pretty fast paced. I think they did as good a job with this game as they possibly could have. The huge amount of content in the game is also quite impressive as well as it assures that you won’t run out of stuff to do. It’s going to be a little rough not having a DBZ game to play for a while, but maybe it’ll be time to finally go back to the Card games that I own for the GBA and DS. That gameplay may not be quite as good as Fusions, but maybe it’ll have aged better than I gave it credit for. Perhaps…..