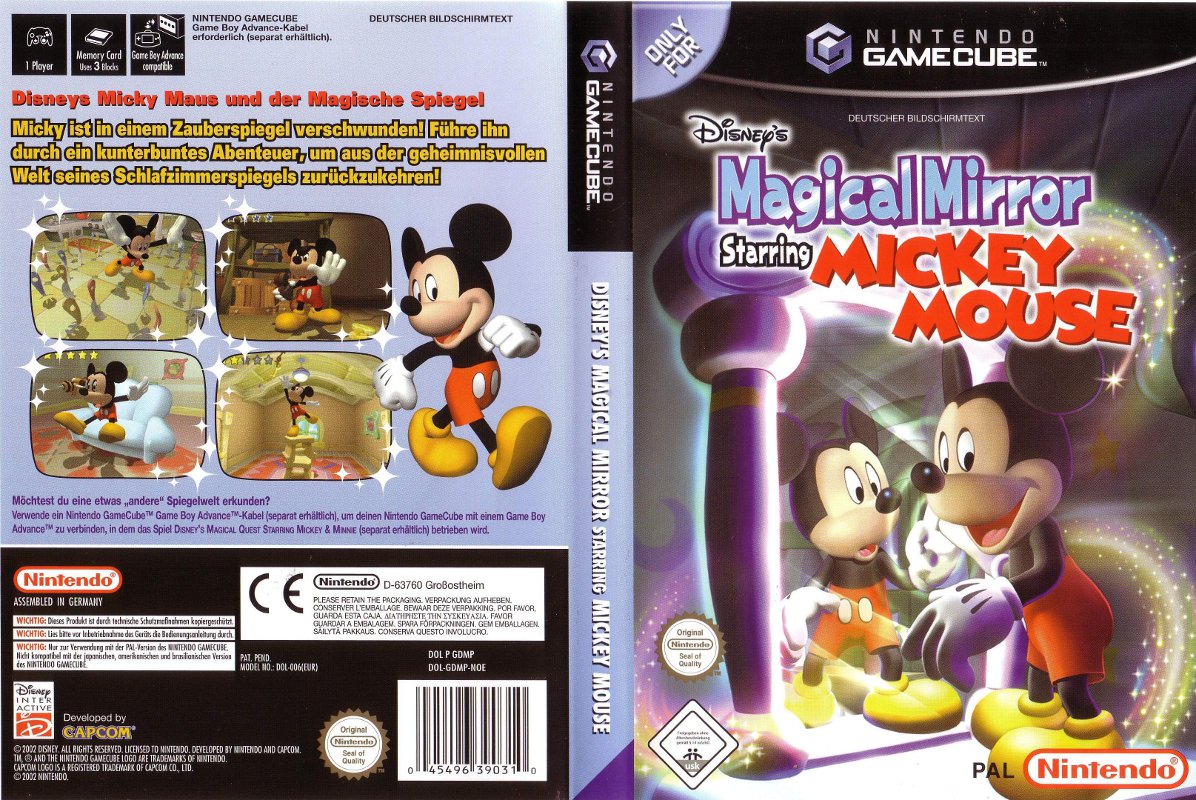 It’s time to look at a retro Mickey Mouse game. The moment you boot it
up the game has a nostalgic feeling to it as the graphics are the kind
that you could only find on GameCube. It just looks really hype, alas
there isn’t much gameplay to support that.

The game starts with Mickey going to sleep but then his ghost wakes up
before his body does. Seizing the opportunity, Mickey jumps out of bed
and heads to the world of the ghosts. Unfortunately, the mirror that
he used to leave his human world had been broken by some tricky
ghosts. He will now have to find all of the pieces before he can
leave…or will he?

This game actually had two endings which is pretty interesting. There
are 12 mirror fragments scattered throughout the mansion. Your
mission, should you choose to accept it is to find them all. That will
unlock the good ending. Alternatively you can find most of them,
enough to piece the part of the mirror together with a gap big enough
to jump through. Then you unlock the “bad” ending.

Naturally when I saw that the portal was open after getting most of
the pieces I jumped through. Keep in mind of course that at this point
you aren’t given any indication that the game will end if you do this.
The cutscene starts and you quickly realize that there is no turning
back. The ending is actually a little tragic, almost dark. As you head
through the portal, the ghost begs you not to go but you decide to
leave anyway, all the while wondering if maybe the ghost wasn’t so bad
and just wanted a friend. Either way it’s too late now as there is no
way back.

There isn’t much of a story but what we do get is pretty emotional I
suppose. The whole world is definitely creative as the house has a lot
personality. Think of any classic room you’d expect to have in a
mansion and this place has got it. The levels are fairly large. The
game is very short but the time can be extended a bit if you try to
100% the title. There isn’t much replay value though as beating the
game locks you out of it as a lot of older games used to do.

As I mentioned earlier the graphics are very solid. The art style is
on point and the game just pops out at you. It’s the kind of title
that you just can’t forget. There isn’t much of a soundtrack though so
the graphics have to hold the game up on its own but it is more than
ready to do so.

So this is all well and good, but what about the gameplay? Well,
that’s the part that sinks the game. It’s effectively an I-Spy game.
As a result you aren’t doing a whole lot of actual playing here. In
fact you can’t even move. You click on parts of the screen to try and
move there. Then you click on objects to interact with them. You get
trick points for scaring Mickey which you can then use to attack the
ghost and get a fragment. There are a few issues with this. The first
is that while at the start you will be able to remember which objects
you’ve already tried out, that will be very difficult by the end of
the game where there are a ton of them. This is a problem because the
object interactions never go away so each time is treated as the
first. Some objects have more than one resolution as well. Some need
specific items to activate but you don’t know which item or how to
find them.

The game has a lot of rooms to explore which is good as it shows that
the developers put some effort into making the game as big as
possible. On the other hand, this makes the game feel a lot slower
than it should have been. There is no way to quickly go from room to
room and you better memorize where each of the rooms are because if
you go through the wrong one there is a chance that you won’t be able
to turn back. Some doors only work one way which is definitely not
what you want to see.

I think ultimately what this game was lacking was quality of life
enhancements. 2 simple things that would have increased the game quite
a lot would have been to have added a map so you know where you’re
going and to remove interactions from items you’ve already done. That
way you know which items you’ve done already because they won’t give
you an option to click them. Put these two in and I think I’d give the
game another star. It’d be a lot easier to complete the game that’s
for sure. Difficulty isn’t a problem, but this is really more of a
developmental flaw than a difficulty issue. After all, you can
eventually beat the game, it’ll just take longer. Even if you have to
see the sad ending you’ll probably think it’s worth it to escape the
house of mirrors.

Overall, Mickey’s Mirrors is a pretty nice game. It’s definitely
something that would be easy to have a kid pick up and play. The
concept of I-Spy isn’t that hard after all. I do think kids would get
lost after a while though. I-Spy type gameplay can work pretty well,
but typically it would need to be for a horror esque game or something
like that. Likewise, visual novels work because it’s like you’re going
through a movie. However, you can’t go with this strategy if there
isn’t much of a story to follow. It’s not a bad game, but you can
barely call this a “game” because there is no movement or actions to
take. All you do is click a button and hope for the occasional mini
game to show up. If you can get a good price then go for it, but
otherwise this isn’t the platformer that you might have been
expecting.

It’s time to look at a recent mobile game. After Pokemon Go came out and completely changed the way we all look at video games, it makes sense that another game would want to try and replicate that success. We had Draconius Go which got a lot of hype during its start but then it quickly faded away. I think that game may have still had a bigger life cycle than this one though. For starters, this game messes up the fact that you’re supposed to play it on the go which is a problem.

So, the overworld is just like Pokemon Go. You will see dinosaurs all around so you want to walk around the neighborhood and catch them. Catch all of the Dinosaurs that you can and then take them to the multiplayer place so fight others. So far so good. Adding PVP right away was certainly a shot at Pokemon Go. The gameplay is also more like the handheld Pokemon games which is no coincidence.

Where the game messes up is when it comes to catching the Dinosaurs. In Pokemon you just throw a ball which is nice and simple. This is perfect because it’s not too distracting and so you don’t have to worry about bumping into people or just stopping so you can make the catch. You barely even need to look at your phone as you know where to throw. This game is a little different as you have to hit the dinosaurs with a bunch of darts to capture them. The problem is that this takes a little while and the throws have to be precise as the dinosaur runs while you try to catch it. This means that you have to just stop for a bit while this is going on and you have to do that for every single Dino. This wouldn’t be a problem in a traditional app game but for one that you have to play outside it’s just no good.

The game also ramps up the corporate feel to it as you have actual advertisements everywhere. The game constantly tries to get you to spend money instead of being subtle like Pokemon. Every time the game wants you to spend money you just think that the game is too desperate to take your money and run. The developers know that this game isn’t going to last so that’s why they want to take your money and then split. It just feels a little underhanded. There is currently no reason to play this over Pokemon Go either. It’s just a far more watered down version of the game.

If Pokemon Go didn’t exist then this game would certainly look a lot better, but then it probably wouldn’t even exist anyway. There’s nothing wrong with the game and it’s reasonably fun, but that’s about all that I can say in its defense. The graphics aren’t bad, they’re basically standard issue. Not the worst looking app game that I’ve seen, but nothing to suggest that it is as new as it actually is.

There isn’t much of a soundtrack unfortunately. Currently there are 100 Dinosaurs in the game and I caught 9 unique ones. That’s not bad, but it isn’t great. Still, any time spent playing this game is time that I could have put into Pokemon Go instead so I knew that this was enough for me. If you would really rather play this than Pokemon Go then by all means go right ahead. Still, I just can’t see the appeal in this one winning out. I suppose if you really love dinosaurs then that could be enough.

Overall, Jurassic World Alive just feels like a total cash grab. There’s nothing subtle about it as the game feels slapped together to earn some money. There is no polish to the game and not a lot of depth either. Still, you can certainly end up playing this game for a long time because I’m suire they will make it very difficult to acquire the 100 Dinosaurs before spending some cash. Just think about whether you want to pay the price or not.