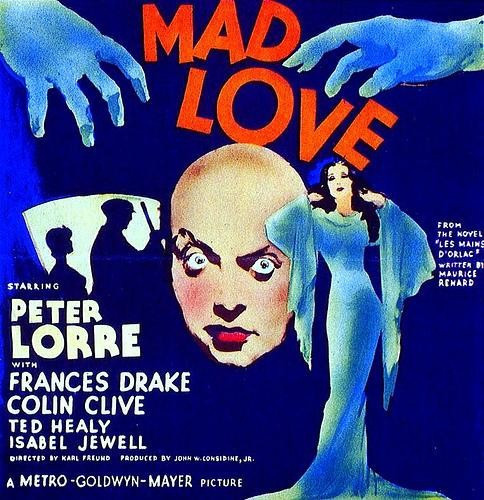 It’s time to look at an old horror film with Peter Lorre. You may wonder what this is doing here when I’ve mainly been reviewing Christmas films lately right? Well, basically I saw this film a while back for Halloween and then just never got around to reviewing it. The film’s pretty bad, but it’s also just rather boring so I kept putting it off. Well, this is currently the last review on the backlog so I can hardly afford to keep putting it off now right? Brace yourself!

So the film starts with the ever famous Yvonne finishing another performance. An obsessed fan by the name of Gogol shows up to let her know that he has been watching all of her shows. Yvonne quickly flees the country to reunite with Stephen, but the latter was in a train accident after being in the same car as a legendary knife throwing crook. Stephen can no longer play the piano as he once did. Yvonne feels bad for him so she goes to Gogol who is the utmost authority on this. He is able to stitch together the murderer’s hands on Stephen but pretends that he just sewed them back on. Stephen is as hard of sight as he is lacking in common sense so he doesn’t notice that his hands are different. Things start to get dicey for him though as the hands appear to have a life of their own. Meanwhile Gogol uses the distraction to try to get to Yvonne.

Gogol’s only goal in this whole film is to get together with Yvonne. This does not make for a very compelling villain motivation. In fact, it isn’t interesting at all. He’s just a terrible villain and all of his scenes drag down the film. Yvonne also should have taken his advances more seriously and alerted the cops or Stephen. Gogol gets away with a whole lot as he stalks her during the film and even crashes her party to take advantage of some crazy games they were all playing. Stephen is around but too busy wallowing in self pity to be of any help. In his defense Yvonne should have mentioned something, but I won’t cut him too much slack because he’s just not a good character. He’s too quick to freak out and should try to master his hands rather than let them control him.

In a way it almost makes you think Gogol was right to not tell him where the hands came from since Stephen would not have taken it well at all. At least the knife throwing does come in handy by the end of the film though. By that point the film is just about over so he cut it awful close. Meanwhile you just have to question how Gogol got his license to practice when he is so clearly insane. The guy isn’t even subtle and you have to feel bad for his patients. He gets distracted quite easily after all. Adding to the creep factor is the fact that he also bought a life sized statue of Yvonne to put in his room. His care taker even has to do her hair and everything.

Ah yes, that brings me to the care taker and the local police guy. Both of these characters are very slow on the uptake and don’t contribute a whole lot. The care taker does a lot of grumbling and snitches on Gogol a lot, but doesn’t do it in a very safe way. She puts her head on the line so many times. Then we have the police guy who isn’t all that interested in doing much. His “sleuthing” if you can call it that basically revolves around chatting with the Gogol’s maid. When it comes time to check the room out he takes so long that the villain gets to return. I usually like the police/detective characters but this guy just wasn’t effective at all. Take him out of the movie and I don’t think a whole lot would change. It would effectively still be the same film and that’s an issue.

At least we can take solace in the fact that this film’s plot would be a little harder to do nowadays. Since Yvonne is a famous singer/performer I expect she would at least have some bodyguards so they would notice a stalker. Even if she does not, security should be a bit tighter at the events and someone should realize that this guy is always around. His only defense is that he’s a world class doctor and that wouldn’t hold much water next to a celebrity. Yeah, I’m sure this plot is still being done regardless, but it’ll be so contrived that maybe the film wouldn’t take itself seriously and it would still be better than this one…maybe. Also, Peter Lorre wouldn’t be in it and he’s probably one of the worst actors I’ve seen so that’s already a plus.

Overall, Mad Love isn’t a good film. The title is pretty much a tip off to that. Films about villains who eagerly want the main heroine to appreciate them are often doomed to fail. This one sided romance breaks the villain instantly. You just can’t take him/her seriously after that. Then you also get mad at the main character(s) for not calling in backup right away. They wait until it is too dangerous or too late to call for help before thinking of it. The film’s fairly short, but even so I would recommend giving this one a pass. There just isn’t much to be salvaged or learned from this film. If you want a good thriller, watch something with a little more pop like the Yugioh films. This movie is best left forgotten.