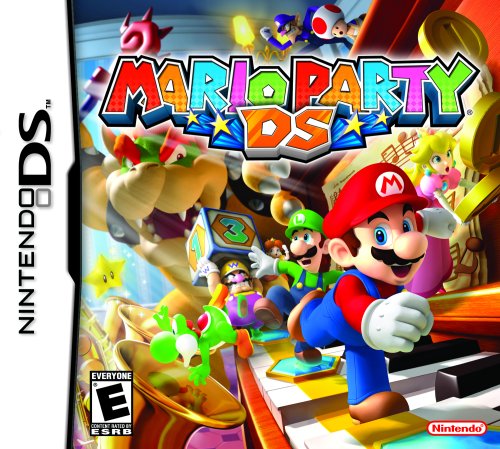 Mario has returned. I’s been a little while since I played my last Mario game so naturally something had to give. I needed to be able to jump back into the Mario groove and really see how the series is doing. Fortunately that was absolutely part of the gameplan. Ebay had a good price on this one so I knew it was time for the plunge.

The story here is fairly basic as you’re likely here for the minigames anyway. Bowser tricks Mario and friends into heading over to his place for some food. They are all desperately hungry so they show up but promptly get cursed into being tiny by Bowser. Bowser’s just in a whole different league thanks to his magical abilities. The only way for the heroes to make a comeback is to find the legendary shards and become large again. It won’t be easy though as Bowser is up to something.

It’s reasonably short as the game only has around 5-6 worlds total. Each world is effectively a mini party mode that lasts for 10 turns. Your goal is to complete the game and come in first place by having the most Power Stars. If you come in second or later then you lose and have to start from scratch. Naturally that is the toughest part here. Mario Party has a lot of luck thrown into the mix after all in addition to skill. You may win a bunch of minigames or even all of them but you can still lose a match due to how that all works out. The computers put me through the wringer here.

So that should help extend the game’s play time a bit. I would say the game is only a few hours long otherwise. Of course one way that can help you with this a bit is the fact that you can reset the game if you have a bad turn. This will help nullify part of the luck factor as you can keep on spinning until things go well. From minigame results to power stars, the power is in your hand now.

Outside of the story you have a lot of other modes of course like minigame mode and local multiplayer. There isn’t really a lack of content here which isn’t surprising since Nintendo always gives you a lot of bang for your buck. In this case all of these extra modes and impressive array of minigames will ensure that you can keep on playing for a long while. At 10 bucks it was quite the steal.

The best minigames here might be the hide and seek one or some of the combat types. For Hide and Seek I like the idea of running around and looking for someone even if it feels like it is heavily favored against the one person who is alone. Dodging everyone for the duration of the match sounds crazy. Of course then you have minigames like with the coins falling where if anything it is really easy for the player to get most of the coins. I’d say it balances out in the end.

As expected the soundtrack is also pretty good. Don’t expect the same level of intensity as in the mainline Mario games but it still has a high energy feel to it. This is all AAA music. The you have the graphics which have aged well on the DS. All of the characters are on point and the backgrounds are good. It would be nice if you could taunt like in the other games but it’s really not a big deal. It’s the kind of thing you notice for a few minutes and then forget about entirely.

Mario Party DS is a rather simple game which is executed well. You could even say that the title would live or die based on the quality of its minigames. A game like this can’t work nearly as well if you don’t have fun games to play. If they were to drag on then that would take the fun away right then and there. A good minigame should be short and to the point which this game really nails down.

Overall, I would say this game is a big step up from the Mario Party for GBA. It’s not quite touching any of the big console ones yet though. There are still a few more portable Mario party games I don’t have yet though so we’ll see if they continue to improve. If you like the Mario Party series then you should definitely get this one. There’s no reason you wouldn’t like the hand held version. Additionally while it may be old, I wouldn’t say it’s out dated or anything like that. You can easily plug and play at any time. Just work on grabbing those unlockables to really fill the game up.